One would think that scientists are a pretty sane, logical bunch.  But like many others who depend on the government to provide them with funding, they probably are guided more by money and politics than by science.

Here are some excerpts from the article that are very interesting, especially when you consider that the global cooling catastrophe was scientifically predicted by the same organizations that are predicting global warming catastrophes today:  the National Center for Atmospheric Research and the National Oceanic and Atmospheric Administration.

"The central fact is that after three quarters of a century of extraordinarily mild conditions, the earth’s climate seems to be cooling down."

"A survey completed last year by Dr. Murray Mitchell of the National Oceanic and Atmospheric Administration reveals a drop of half a degree in average ground temperatures in the Northern Hemisphere between 1945 and 1968."

Here is a graph of the global cooling as depicted by the National Center for Atmospheric Research: 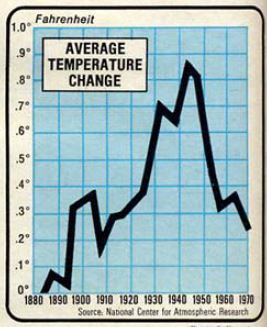