It is beyond me why the voters in CD5 would want to be saddled with Christine Jones as their Representative in Congress.  She’s clueless about the character and demographics of its citizens–she lives in CD9, not CD5.  How do you “represent” citizens you know nothing about?   CD5 is one of the most conservative, family-oriented districts in Maricopa County.  After reviewing the history of Christine Jones, my head hurts.  But not as badly as the perpetual migraine that she will inflict on CD5.  Take away her paid handlers and well, think of a Conservative, and then take away courage, conviction, and good judgment.

Jones has a history of contradicting herself to the point of absurdity.  Add to this a shaky grasp of the Republican platform, high praise for Hillary Clinton, and a tendency toward self-aggrandizement.

Her reason for not taking on her own district (CD9) defies logic.

CD9 is currently represented by Democrat/Liberal/Leftist Kyrsten Sinema.   Jones would be a conservative heroine if she had run in her own district and beat Sinema!  In November 2015, Jones was asked if she planned to run against Sinema in 2016.  She stated "Although (the 9th District) appears eminently winnable, pursuing a seat in Congress at this time is not the highest and best use of my time."  See Christine Jones Won’t Challenge Kyrsten Sinema.

By April 2016, she decided to pole vault into CD5 and run against a solid constitutional conservative, former Senate President Andy Biggs.

"While we respect the right of any individual to run for public office, we strongly discourage candidates who live outside of our district from running in the primary election to replace Congressman Matt Salmon."

In order to promote her conservative bona fides, Christine Jones has had to rework and walk back, minimize, and brush off her many self-aggrandizing claims and idiotic statements.  For example:

"When I was a Prosecutor….I tried cases in Compton"

When testifying in a 2008 hearing before the House Judiciary Committee, she made it sound like she was the prosecutor who “tried” serious drug cases.  The Truth is that she was a certified, unpaid law clerk, who hadn’t even been admitted to the California Bar.  This isn’t just a matter of “exaggeration.”  It isn’t as Jones states, “much ado about nothing.”  It’s a serious matter of integrity.  This is a phony passing herself off as something she isn’t, in a hearing before the House Judiciary Committee!  See Gubernatorial candidate Jones’ work history questioned and "Prosecutor." 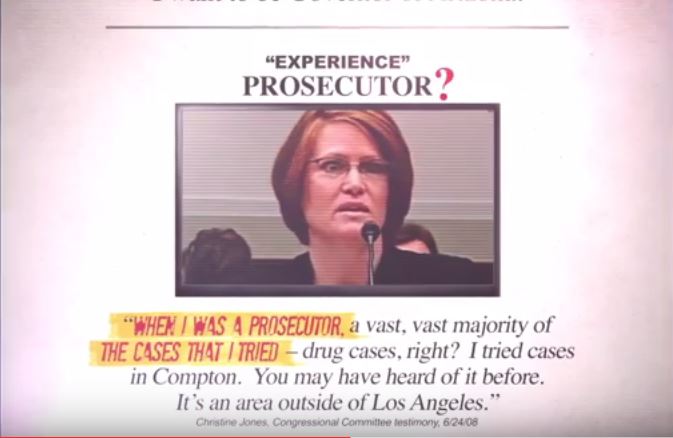 Those who have truly served their country are highly insulted by military phonies who mislead people for political gain.  See MilitaryPhony.com.

When caught on that one, she walked back her statement to “clarify” that she "planned" to join the Air Force, but her vision problems “stopped her.”  That’s not the way she stated it in this Copper Talk political podcast.  Jones clearly appeared to claim that she had served in the Air Force. The truth is that she took part in the Air Force ROTC while at the University of Oklahoma. Her statements about "joining the Air Force" begin at 14:00.  Not once does she mention ROTC.  See Did This Arizona Gubernatorial Candidate Embellish Her Military And Legal Experience? and "What Else."

I never liked those raunchy GoDaddy ads….not even the one I appeared in.

Jones was employed by GoDaddy beginning in 2002.  She served as General Counsel and Executive Vice President of The Go Daddy Group Inc., until 2012, during which she "managed all legal affairs, most notably issues relating to intellectual property. "   To say that GoDaddy exploits and demeans women is an understatement.  The ads’ most notable feature is the scantily clad young females flaunting well-endowed breasts.  So much for the “family oriented” image of the voters in CD5.  Surely they are horrified.  Here’s the video ad in which Christine Jones appeared.  Click HERE for another typical ad and HERE and HERE and HERE and HERE. See Christine Jones Claims She Dislikes Sexy Go Daddy Ads — Despite Starring in One

"I only had one drink mixed with some type of iced tea.  Well anyone can make a mistake."

According to the police report, Jones told the arresting officer she had just one mixed drink the evening before – “some type of ice tea” – at 9 p.m. and stopped drinking between 9:30 and 10 p.m.  Yet five hours later, at 3 a.m., Jones had a blood-alcohol level of 0.102, above the legal limit of 0.08. See  GOP candidate’s ‘October surprises’ keep coming , and Christine Jones Gave Cop "One Drink" Story in ’04 DUI; Blew .102 About Five Hours Later 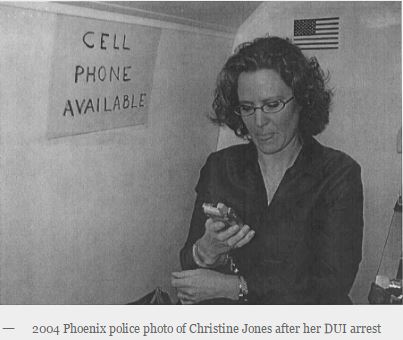 "Find a way to support the new president  (Barack Obama) of the United States"!

In a November 2012 Facebook post, Jones told friends to “get excited” and “find a way to support the new president of the United States of America!” 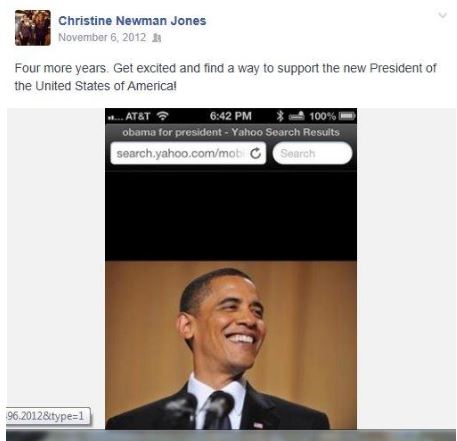 Far from "getting excited," conservatives across America were in mourning over what they knew would be more hatred of America as we all knew it.

"Americans, regardless of party affiliation or political involvement, will begin to realize what an effective Secretary of State Hillary Clinton was." Christine Jones

Christine Jones offered glowing praise for Hillary Clinton, two months after Benghazi.  Veterans for a Strong America Chairman Joel Arends said, “Christine Jones’ comments in support of Hillary Clinton are an insult to the victims of the Benghazi terror attacks and to every person fighting for accountability from this Administration for their role in the deaths of four Americans.”

"She (Hillary Clinton) has made her boss and her party look good with her tireless efforts to represent the US abroad for the past four years." Christine Jones

"Secretary Hillary Clinton will become even more powerful and well-respected as she negotiates for America overseas." Christine Jones

"The (Obama-Clinton) ticket that is unstoppable. The combination of experience and charisma that is only found in John Grisham novels and cheesy television dramas. The one-two punch that makes the republicans shudder in their we-are-not-the-third-term-of-Bush boots." Christine Jones

"She (Hillary Clinton) developed her skill on par with her talent and gave 100% to the goal she set so many years ago. And, for that level of commitment and drive, we here at The Rudy Syndrome salute her." Christine Jones

(There’s more where this came from.)

Christine “the Ninja" Jones often "shoots with my eyes closed"

She bragged to Fox News reporter Troy Hayden at a local gun range that she was so good, she often “shoots one handed,” and “shoots with her eyes closed” because the chances are if somebody attacks you, it’s going to be at night.”  Huh?  Click HERE and hear what she has to say at 1:50.

Christine Jones is a Pro-Life Phony

“As Governor,” Christine Jones will show Congress a thing or two!

GOP Candidate For Arizona Governor Arrested For DUI In 2004