You are invited to a Meet and Greet for Emilena Turley this Thursday, April 3, at 7:00pm at the home of Rusdon and Emily Ray. Bring the kids. Treats will be provided.   The address is 19520 E. Aster Dr., Queen Creek.   Emilena is running for Queen Creek Town Council. 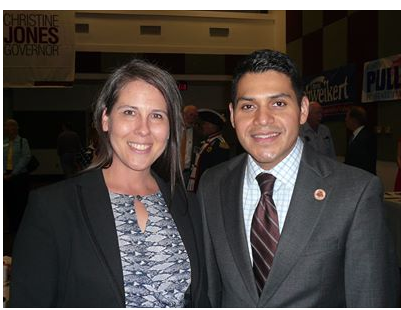 "We thought we had strong local leadership,and we assumed our local representatives would stand strong against over-the-top federal control when it mattered. We were very disappointed to find out that 5 out of the 7 council members in Queen Creek stood with the feds when it came to adopting the largest increase in regulation on our private property in the history of Queen Creek, even using the irrational argument that "they were not elected to stand against the man!" meaning the federal government. Unbelievable.

"We didn’t elect them to be puppets. Anybody can play the role of a robot and pass anything that comes down to us. What we need is strong local leadership to protect our rights and freedom. That is their oath of office. Two council members, Julia Wheatly and Jason Gad, stood strong on the side of local sovereignty showing true leadership, but as you know, two votes is not sufficient on a council of 7. Emilena Turley is a needed strong voice for Queen Creek. Come meet Emilena. Bring questions or concerns you have for Queen Creek."