Governor Jan Brewer recently vetoed SB1211, which would have given Arizona ranchers and their families some protection against the maulings and killings by Mexican wolves of their livestock.  See "Arizona Governor Vetoes bill allowing ranchers to kill endangered wolves."  Not only is she disinterested in the social and economic adversity caused by Mexican wolves, but she has also conceded, without a whisper of objection, that 50% of Arizona is "federal land."

Likewise, the chairman of Arizona Game and Fish, J. W. Harris, has thrown his own benefactors, the entire game and fish industry, to the wolves. See Arizona Game & Fish Expand Mexican Wolf Territory.

Both Governor Brewer and J. W. Harris have plenty of staff and research assistance, so they know that their protections of Mexican wolves are hurting Arizona families.  Is the suffering of our fellow Arizonans no more than simply "taking one for the team"?  Apparently, it is.  It’s ok with Brewer.  It’s ok with Harris.  It’s also ok with every Democrat Arizona legislator, because every one of them voted against protecting their fellow Arizonans against the well documented predations of the Mexican wolf.

They know everything I’m going to show you.  These pictures are gruesome.  If pictures make you uncomfortable, please understand that children and their parents and friends are forced to experience this against their will, not just see pictures of it.  Please note that psychologists have identified PTSD in these children in rural Arizona and New Mexico.

Please join me as we make our journey into the Arizona and New Mexico lands where the Mexican wolf is King.

Here’s a photo of one of 5 small calves lost to Mexican wolves over a period of 9 days in 2003 in New Mexico.  According to the family who owned the calves, the only reason this one was found was because of the tracking collar on the wolf.  Notice that, unlike most predators, wolves don’t kill, then eat.  They eat living animals.  Those animals scream until they finally die.

Mexican wolves were reintroduced by the federal government (USFWS) via the Endangered Species Act (ESA) in Eastern Arizona/Western New Mexico in 1998.  Since that time, the wolves have gravitated to livestock and the yards of families living in that part of Arizona and NM.  There is a Facebook site that relates ongoing interactions with Mexican wolves called Wolves, Cattle, and the People Who Live Between Them.  If you go to this site, there is a video of Arizona Rep. Jamescita Peshlakai speaking at the 12/3/2013 showing of "Wolves in Government Clothing."  Many people who attended this event testified to the adverse social and economic effects, including Steve Titla who represented the San Carlos Apache Tribe.  The tribe has been devastated by the introduction of the Mexican wolves next to their reservation.  Everybody thought Rep. Peshlakai would be against the Mexican wolves that were hurting rural families.  We were wrong.  She voted AGAINST every anti-Mexican wolf bill:  HB2699, SB1211, SB1212, and SCR1006.

The following accounts represent a small fraction of the harsh realities that these rural families experience.

Click HERE for a video about a horse named “Six” who was run by 5-7 Mexican wolves (the Aspen Pack in New Mexico) from his pasture into his corral, within yards of the family home, where he was pulled down and eaten.

This video is titled: “Exposing the Facts About the Wolf Reintroduction and the Impacts on Rural Families and Communities:  Mexican Wolf 1998-2013.”  It is a picture album of the maulings and killings of pet dogs, horses, calves, and other animals in Arizona and New Mexico.   Most of this was seen or witnessed by children. 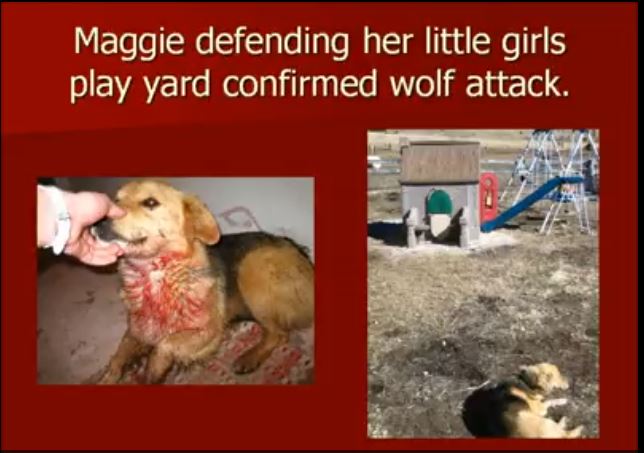 This is how a little girl in New Mexico saw her pony alive.

This is how she saw her pony dead. 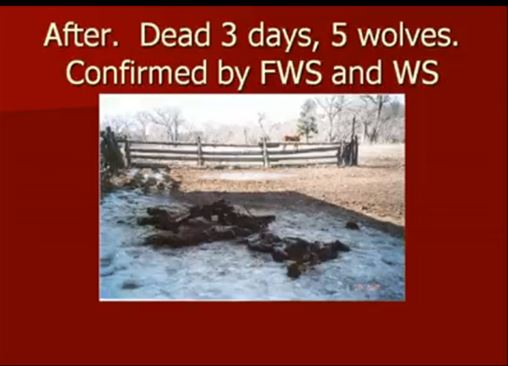 A 9-month old Mexican wolf did this.

The wolf that did this was only interested in ripping the fetus out of this cow.  Wolves were still hanging around the corral when the county sheriff showed up.  Otherwise, the Mexican wolf advocates say, "it was probably coyotes," or give some other standard excuse. 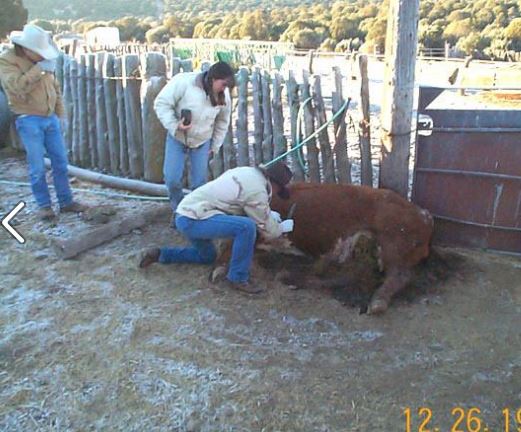 Wolves frequently eat only portions of an animal and leave it to die a slow, excrutiating death. 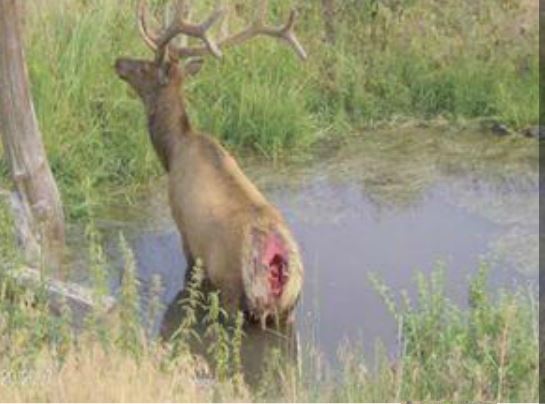 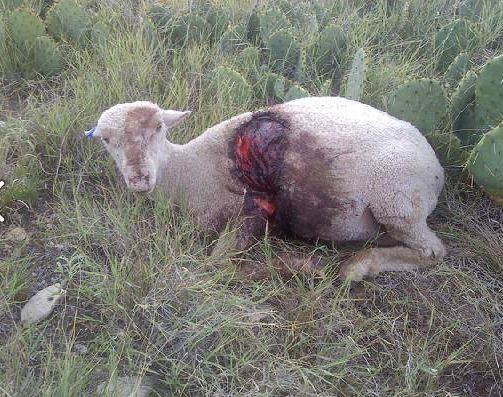 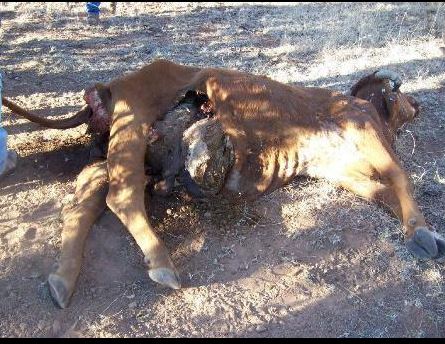 This colt was bitten on the shoulders and all four legs.  It had to be destroyed in 2011. 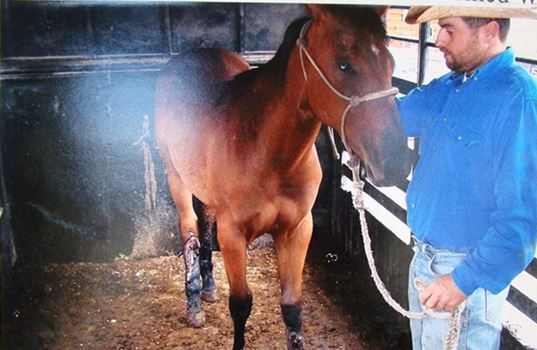 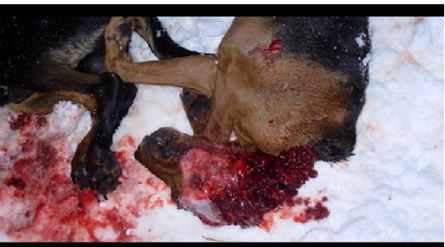 Three wolves cruising through the neighborhood, taking time out to maim a cow. 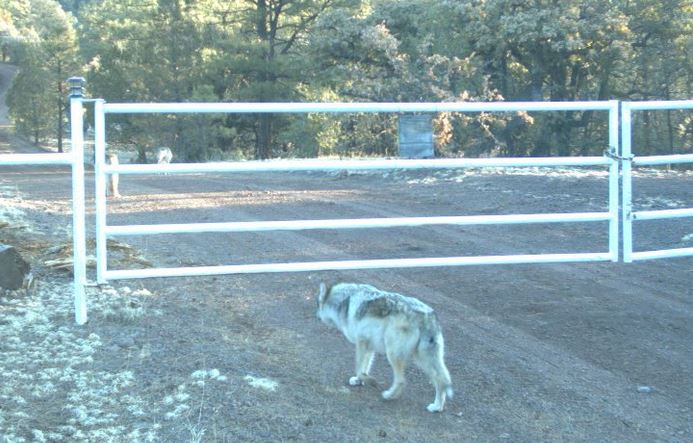 Here’s a news article titled “Under Siege in Wolf Country: The Mexican Gray Wolf: Killers and Thieves of Peace of Mind.”

“If I came in your house every night and stole from you and you knew who it was, pretty soon you’d do something about it,” Haught says. But the Haughts and others who live in and near the Blue Range Wolf Recovery Area in eastern Arizona and western New Mexico are trapped in a nightmare – they know who is stealing from them but they have to helplessly allow it to happen.

Non-combatants who live in war zones know about vulnerability – family, possessions and way of life threatened with no way to protect any of it, no recourse if something (your possessions, your livelihood, your peace of mind) is taken from you. In the wolf recovery area, people feel like they are living in a war zone. They are having their possessions and their way of life stolen from them, and they cannot protect any of it.

There appears to be some idea in the outside world that wolves are not dangerous, that they mind their own business and help control the populations of elk and deer in the wild. But those who live here know that wolves are smart enough to have found easier prey – calves, foals, cats, dogs – and they fear that one day they will find children to be the easiest prey of all.

A mother and her children terrorized by a Mexican wolf.

The mother of young children in Alpine, Arizona, sent an email to Sylvia Allen, asking her for help.   As a Supervisor with Navajo County District 3,  she has done all possible to help her.  Mexican wolf advocates turned a deaf ear.  This mother and her children live in a cabin near Alpine, Arizona.  A Mexican wolf began hanging around the home, which the mother reported to the Forest Service.  She was told, "be cautious."  Members from the "Wolf Project" visited her and said they were tracking the wolf and would handle the situation.  She was told she was not allowed to shoot the wolf unless she was in "imminent danger."  Days passed.  She had to keep 6 children inside a 700 sq. ft. home.  Each evening members of the "Wolf Project" would sit in front of her small cabin with their trackers.  They told her "the wolf is living in your backyard."  One night, a Wolf Project member shot a gun into the air trying to scare the wolf away.  But it remained living in the back yard.

One day, the mother arrived home with her children.  Everyone unloaded, and then she saw the wolf in the front yard.  She tried to scare it.  It was in the "prance" position.  Everybody was yelling at it.  The wolf didn’t react.  They got into the house, and the mother called the Wolf Project. They arrived and used their trackers to locate the wolf.  It had gone back to a mountain behind the house.

After 2 weeks, a government intermediary was sent in and removed the wolf.  It was taken to a vet, healed from a wound, and released further from the family’s small home.

This family never received any assistance.  The Wolf Project and the government was only interested in protecting the wolf.  She was told that if she shot the wolf, the incident would be investigated.  If it appeared that the bullet did not hit the front of the wolf, she would be prosecuted.

The Apache County, Arizona, Board of Supervisors Ignored

The Apache County, Arizona, Board of Supervisors has done all possible to fight the “endangered” designation for the Mexican wolf, and against the expansion of the Mexican wolf’s boundaries. These elected officials state:  “It is a local government responsibility to protect the health, safety and welfare of its citizens.  This includes protecting local citizens from the adverse societal and economic impacts of federal actions such as the manipulation of wild animals and their management.  Since the element of the human dimension is not adequately addressed by the US Fish and Wildlife Service (FWS) and other federal agencies in this particular regard it is imperative that local governments not only address but take action to protect the wellbeing and interests of the local citizen.”    Click HERE and HERE for their statements to the USFWS.

Female Jogger Killed and Eaten in Alaska in 2010

This answers the question:  “Do wolves kill and eat people”?  Wolves killed and ate a female school teacher while she was jogging.  These were healthy wolves.  I say that because wolf advocates maintain that wolves won’t attack people, unless there’s something wrong with the wolf.  There is nothing wrong with wolves.  They are apex predators doing what apex predators do.  See “Wolves Killed Alaska School Teacher, State Says.”

The wolf is “endangered” so the incident is being investigated.  See Flathead Valley Hunters Shoot Wolf, say they were Surrounded.

Expanding the Release Area of the Mexican Wolf

Wolves Cause death of 176 Sheep near Fogg Hill