Did you see this article?  It wasn’t reported by the leftist, malpracticing media.  The Government is actively stomping all over our individual liberties "for our own good."   Here’s the latest destruction:  Breaking News:  LDS Canneries East of the Mississippi to Halt Canning.  Now, why would LDS shut down their canneries?  Don’t they encourage personal responsibility and self-reliance?  Exactly.  The Democrats, and even some Republicans, hate that.

My solution regarding ALL of these taxpayer-funded agencies?  Starve the beasts!  Defund the monsters!

For those who aren’t aware, the LDS Church (Church of Jesus Christ  Latter-Day Saints) has encouraged self-sufficiency for decades.  They encourage their members to set aside a food supply to last a family for 12 months.  To accomplish this, members of the Church volunteer at Church canneries.  LDS members aren’t stingy about it.   Non-members of the faith may also volunteer and take advantage of purchasing #10 canned foods at cost or just above cost.

Until Big Brother stepped in.

Here are some excerpts from the article:

"LDS canneries east of the Mississippi will no longer be canning any food at their facilities beginning as early as June 27, 2013, as they are no longer able to justify the abhorrent costs to keep up in compliance with the ever changing criteria set forth by the U.S. Department of Agriculture and the Food and Drug Administration.

"When the government regulations become a moving target, it’s nearly impossible to accommodate their criteria regardless of one’s financial strength or commitment.

"….it seems like they (USDA) only show up now because they see an LDS cannery inspection as a way to make a quick buck."

And one of the most disturbing excerpts:

"Several of the personal interviewees made it clear that they feel like there’s an active intent by these government entities to shut down ALL LDS Canneries ALL over the U.S. including a target on the ability to purchase food in bulk, and that there seemed to be a targeted time table by the government to have this accomplished at the end of the next two years."

And then there’s the Visit from the FBI

Not to Mention the Story of the Home Gardener Who Was Raided by Police.  He had been under surveillance for months….

Here are some of those "violators" of federal mandates in their deplorable LDS Cannery conditions: 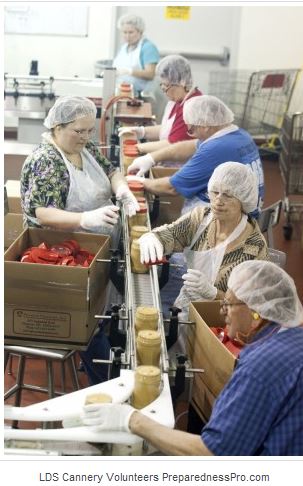