As of last night, November 5, at 9:47 pm, according to Maricopa County’s Election Results, it appears that many Maricopa County voters have tired of passing school district property tax overrides and school tax bonds.  They rose up and said, "Enough! Get your fiscal house in order!"

It’s one thing to be on the correct side of an issue, but it takes teamwork, intelligence, hard work, integrity, and persistence to get the correct side presented to the public.  The activists presenting their case in several East Valley school districts made themselves heard.  From having worked with the No to the Override Gilbert group, I can tell you that they were outspent,.  Their signs were stolen, vandalized, and sliced up.  The Mayor of Gilbert and Town Council member Eddie Cook were against them.  A group funded by organizations like Core Construction fought against them.

Not only did a dedicated core group of Gilbert residents fight off this override, but also a magnificent group of elderly people who regularly attend Randy Hatch’s Arizona Red Mountain Patriots battled.  They live in Mesa, but are in the Gilbert School District and pay plenty in property taxes. They organized and held community meetings and encouraged their fellow seniors to vote NO.

The following school district overrides and bond issues went down in defeat:

Unfortunately, Mesa and Phoenix continue going down the path of self-destruction.  (Mesa Mayor Scott Smith has no business being the Governor of Arizona!)

Chandler’s override win is based on an extremely small margin of just 64 votes!  This one definitely isn’t over.

Pinal County has reported that many of their school district overrides bit the dust, too.

According to Steve Kohut, "…. the Left made an all out push with support from the Chamber of Commerce, unions, local officials, etc. They put up signs, did mass mailers, and robo called voters. We put up our tried and true red on white 4×4 "It’$ Not For the Kid$, Vote NO" signs.  Our signs were stolen, our signs were vandalized, yet we won at the ballot box. Casa Grande Elementary was a battle. Our margin was 19 votes. Casa Grande High School was a comfortable 10%. Even democratic Eloy’s went down in flames." 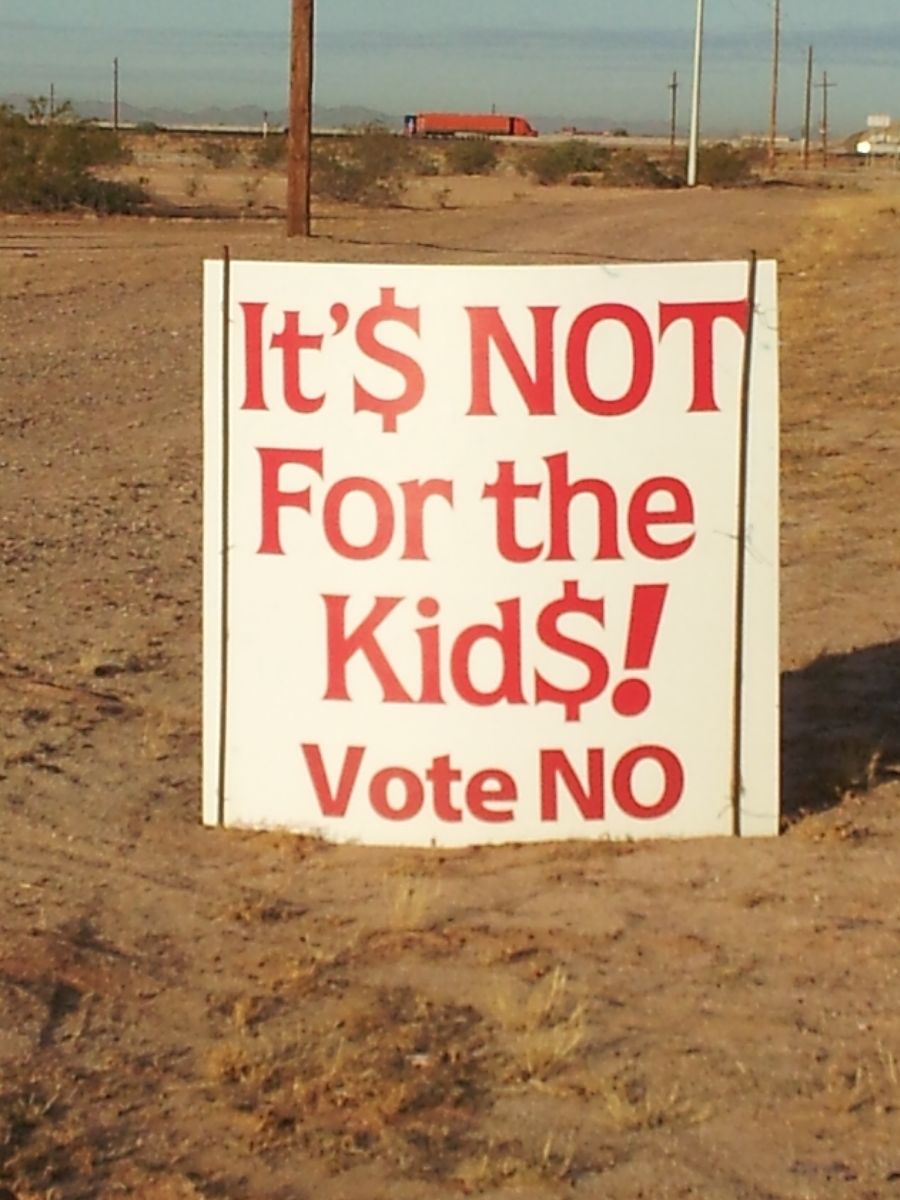