Jeni White, self-described "geek" and candidate for Secretary of the MCRC as part of as part of   A. J. LaFaro’s grassroots conservative slate, is a strong conservative, results-oriented leader and Republican unifier.  As Chairman of LD18, she helped bring members of former Districts 17, 20, and 21 together to work very successfully in the 2012 GOTV push.

This effort resulted in one of the most highly acclaimed Arizona victories in the 2012 election.  Jeni White and her team delivered 2 to 4-point leads for Mitt Romney, Vernon Parker, and the entire Republican Corporation Commission slate within LD18.

LD18 got all of their state legislators re-elected by 7-8 points over their Democrat challengers.  LD18 also elected 5 of 6 school board candidates, defeating a liberal incumbent and a single-shot Democrat with name ID.

"All of this was in a heavily gerrymandered district that had gone for Barack Obama in 2008 and for Terry Goddard in 2010, in which the Democratic Legislative Campaign Committee and others spent hundreds of thousands of dollars attacking our state legislators, and pre-election polling had shown a toss-up for State Senate and predicted at least one loss in the State House," states Jeni.

That loss in the State House didn’t happen in LD18.  Representatives Jeff Dial and Bob Robson were both re-elected, with a nearly 7-point margin over the Democrats’ team. And Senator John McComish was re-elected with a nearly 6-point margin. Ouch, DLCC… That’s gotta leave a mark.

Without going into the strategic details that beat the snot out of the Democrats, I can tell you that the effort involved many moving parts, fundraising, technology, coordination and cooperation, good humor, pizza, late nights, and over a hundred hard-working volunteers.  Everything her District did locally, they offered to other groups so they could do the same.  And somewhat to their surprise, they finished up with a few thousand bucks left in the bank. Not bad for a District (LD20) that started out with unpaid bills in 2010.

Jeni understands very well that none of what she does means "diddly" without team involvement and effort.  She credits those hard-working, talented individuals over and over.   "I didn’t really ‘lead’ our team," she says, "I set out to work and invited them to join in. And, God bless them, they did." And they did, over and over.

"One of the District PCs gave me a sculpture in June after I helped him gather signatures and get his form notarized; he said it was ‘Republicans helping Republicans.’ Very touching and reflects an absolute core principle. That’s what we’re about in LD18. It’s what we’ll all have to be about in years to come, if we want to win elections."  Jeni states emphatically. 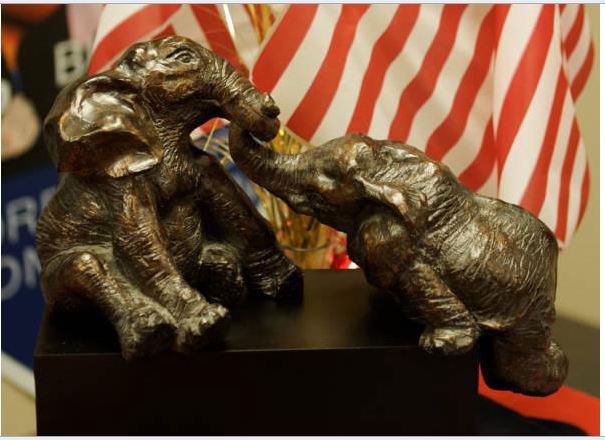 Not only is Jeni White an effective motivator and immensely likable leader, she is also mindful of her duties as a Precinct Committeeman, talking to voters, distributing literature, making phone calls, and putting up and taking down campaign signs.  She has designed some of those signs, along with bumper stickers, banners, badges, business cards, and an integrated online and social media presence for the district.

At the state level, Jeni documented the State Convention process for dissemination by AZGOP staff to State Delegates and served as Secretary of the Bylaws Committee. She also shot the AZGOP event and VIP photos, and she created and maintained photos.azgop.org for online photo archival and distribution.

Jeni White is also a successful business professional with over 18  years’ experience in Web site design, redesign, maintenance, and application development.  She has been a Program Director, Proceedings Editor, and Workshop Director for multiple national and international conferences.  She has over 5 years’ experience in policy and process documentation, audit response, newsletters, and other documentation.  She has outlined, developed, and maintained online training materials for an audience of approximately 8,000 at Arizona State University.

She put those technology skills to work in her District.  They will be critical in the Maricopa County Republican Committee and invaluable in overcoming the Democrats’ technology machine.

The 2012 LD18 Victory race wasn’t the first time Jeni White was involved in a successful campaign.  Back in 2010, a group of organizers that included Jeni White gathered together in a "team of individuals" effort that involved "cooperation with the district, the TEA Party, and the amazing Republican Women."  The group fielded a ground effort to mobilize voters, distributing packets to thousands of households in Ahwatukee and a few precincts across the freeway. Her part in that effort was more hands-on than in 2012.  She produced the voter information sheet, ran the printers pretty much all night every night with frequent stops for unjamming, drove around town to pick up campaign collateral, folded and bundled and stuffed, created lists and maps, and then walked precincts every weekend. A couple dozen hard-working volunteers joined in.  That successful effort propelled several of them into leadership positions and provided the seed for LD18’s greatly expanded effort two years later.

After two successful cycles, others have taken notice and called the LD18 effort a model. Jeni agrees: "Every District has different characteristics, but I think we have some things to share that can help a lot of PCs get more involved, win more elections, and have more influence." That’s why she accepted A.J. LaFaro’s invitation to join his MCRC leadership team. "The Secretary’s role isn’t especially demanding, but carries potential for data mining and production of information and materials we can all use to elect Republicans up and down the ticket. That’s what we’re about. Which Republicans? Republican voters decide that in the primaries — with the help of active, knowledgeable, well-equipped PCs."

Some little known facts about Jeni White include her background in high tech crime investigation, having served as the president of the Arizona High Tech Crime Investigation Association.  She has also served as a board member and program director of Phoenix Infragard, as well as a school board member of James Madison Preparatory School and curriculum board member for Information Security programs at Mesa Community College’s Business & Industry Institute.