Jose Borrajero’s experiences, skills, leadership, and incredible accomplishments highly recommend him for Vice Chairman. Jose has gone further than to simply appreciate American conservative values, he has taken on the task to actively engage others to stand up for our freedoms and to hold elected officials accountable.

Jose Came to America from Cuba

Many people don’t know that Jose is a Cuban refugee who left Cuba before his 16th birthday, along with his younger brother.  Naturalized citizens cherish American values a little more poignantly than many of us who were born here, because they had to work hard for years, to gain legal citizenship.

Jose is unique, in that he once lived under a heavy-booted socialistic/communistic regime.  He knows firsthand what “spreading the wealth” at the point of a gun means under dictator Fidel Castro, who confiscated rental property from Jose’s middle-class family and gave it to another family who was more sympathetic to Castro’s policies.   This was typical of Castro’s methods.

Brad Zinn of Western Free Press interviewed Jose about his experiences in Cuba before and after Castro’s takeover.  Jose explains how drastically his life changed as Castro implemented his true Marxist agenda.

Here is that interview.

Topics covered in Brad Zinn’s interview appear in the timeline below:

00:00 When Jose came to America
01:16 Life in Cuba under Batista
02:20 How Castro seemed, at first, like a good leader
03:30 Castro’s promises
04:30 Castro’s delivery on his promises
05:30 Castro’s hidden socialism blossoms openly
06:50 Castro’s round-up, trial, and execution of alleged enemies
08:02 Neighborhood spies
08:20 Confiscation of arms and real property – a personal story
09:55 The Bay of Pigs and Jose’s father’s internment in a concentration camp
11:00 Che Guevera, Castro’s executioner
12:00 What Jose thinks when he sees young people with Che T-shirts
12:30 The Cuban community in Florida
12:55 Jose’s own view on the embargo of Cuba — lift it!
14:40 Kennedy’s promises to Castro after the Cuban Missile Crisis
16:05 Castro’s concentration camps — the use of baseball stadiums
16:40 Daily life under Castro’s socialism
18:00 Why socialism failed in Cuba just as it has everywhere else
18:20 Would the right people make socialism succeed?
19:15 Socialist/Communist education of the children and the illiterate
21:25 How Jose and his younger brother, alone, came to America
23:25 Cuba’s national health care system — high quality for govt elites only
24:35 What is wrong with socialism — why is capitalism better?

Jose is founder and leader of Arizona’s “Rapid Response Team,” a statewide network of grass roots activists whose mission is to advance conservative legislation through citizen input.  Jose and his team constantly monitor the legislative activities of our State Senators and Representatives.  In addition to sending emails to the Rapid Response Team members with Action Alerts, he also posts Action Alerts on the Arizona Freedom Alliance website on a regular basis, keeping Arizona citizens informed about proposed legislation.

Jose and his Team have also attended legislative sessions making his conservative positions known.  He has helped advance, and even pass, pro-taxpayer, pro-consumer and pro-producer legislation.

Jose has educated the public through Rapid Response about legislation relating to SB1485, SB1083, HB2826, and many others.  Early on, he began educating the public through rapid response about the dangers of Prop 121 (the jungle primary aka "Top Two" ), which ultimately failed at the ballot box; on Rule 16 Misinformation; on control of Arizona’s public lands, etc.  He also helped spread the word about the taxpayer money grab of Prop 204, which was defeated.

Both Jose Borrajero and A J LaFaro were instrumental in getting the word out to the public about the egregious misuse of the Republican Victory Funds, the net result of which was that Arizona lost Republican legislators to Democrats.  It was not just redistricting that caused this, but also the squandering of these funds in the Primary, pitting Republican against Republican.

José serves as the communications director of the Arizona Latino Republican Association (ALRA), and has developed a strong working relationship with the major Spanish news networks providing live on camera and radio commentary, in fluent native Spanish, regarding events and issues that affect the communty and the Republican Party.  He helps host ALRA’s weekly two-hour talk radio show on 960 AM KKNT.  ALRA strongly supports conservative Republican principles, including protecting our borders and supporting SB1070. 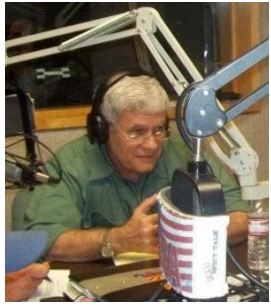 Jose was interviewed by Arizona Illustrated about his and ALRA’s reaction to the Supreme Court decision relating to Arizona’s SB1070.

The interview with Jose begins at 13:00

It has become fashionable to bash Arizona’s SB1070 law among those who seek to profit by promoting racial and ethnic discord. But it is hard to imagine a sitting president of the United States stooping down to that level. Yet, that is what President Obama did during the October 16th debate. In that debate, about 1 hour, 1 minute and 17 seconds into the debate, he said the following:

“He called the Arizona law a model for the nation. Part of the Arizona law said that law enforcement officers can stop folks because they suspect that maybe they look like they might be undocumented workers, and check their papers. You know what, if my daughter, or yours, looks to somebody like they are not citizens, I don’t want to empower someone like that.”

But Arizona’s SB1070 calls for just the opposite. Section 2-b reads, in part, as follows:

“A law enforcement official or agency of this state or a county, city, town or other political subdivision of this state may not solely consider race, color or national origin in implementing the requirements of this subsection except to the extent permitted by the United States or Arizona constitution.”

It is hard to imagine that the president was not aware of such a key provision of our law, especially considering that his administration opposed it all the way to the Supreme Court, where it was upheld.

The president owes an apology to the people of Arizona for having made such a gross mischaracterization during a nationally televised debate.

Jose was also interviewed by Michael Chihak on 9/17/2012, which appeared on Arizona Illustrated.  Please watch this carefully to more fully understand Jose’s response to questions about "the Latino" vote and the challenges that the Republican Party faces in drawing more Latinos to our Party.

Jose is also currently an elected Precinct Committeeman, State Committeeman, Secretary LD15 Republicans, and was elected as one of the A Delegates to the Republican National Convention recently held in Tampa.

Jose Borrajero recently earned the 2012 Lincoln Day “Defender of the Constitution” Award and the 2012 Americans for Prosperity “Activist of the Year” Award.