In case you haven’t noticed, there is a war going on in our K-12 public school system.  On one side are the Progressives and on the other, Conservatives.  Your child is caught in the middle.

The Arizona Progressive Public School System appears to be winning this battle, as they continue to slide into promoting Sex Ed Taught by the Nation’s #1 Abortion Provider, Transgender politics, Darwinian groupthink, Climate Change Groupthink, Social Justice, Suckling at the Teat of Government, Hostility to Christianity, Hostility to Capitalism, Hostility to American Exceptionalism, and Americans are Killing the Planet.

And while the local school districts are indoctrinating our kids, and demanding more tax dollars, they are also turning themselves into soup kitchens, Compressed Natural Gas stations, and jobs centers for adults.

Their message to conservative parent trouble-makers:  We’re the Experts.  Shut Up.  Go away.  Give us more money.

(One notable exception is the Gilbert Unified School District.  Board President Staci Burk, and board members Julie Smith and Daryl Colvin have been bucking the trend.  In the face of continual attacks from the progressives, they have accomplished much.  See The Accomplishments of the Gilbert Schools Governing Board.)

So, Public School Officials, here’s my question:  Why should we feel sorry for you about how a voucher program will "drain money from the public education system"?  Do you have so little faith in your "high quality" educational centers that parents won’t choose your schools over others?

Take a look at how Arizona’s 20,000 members of the Arizona Education Association have teamed up with Planned Parenthood to train Progressive Candidates for local, state, and federal elected office. 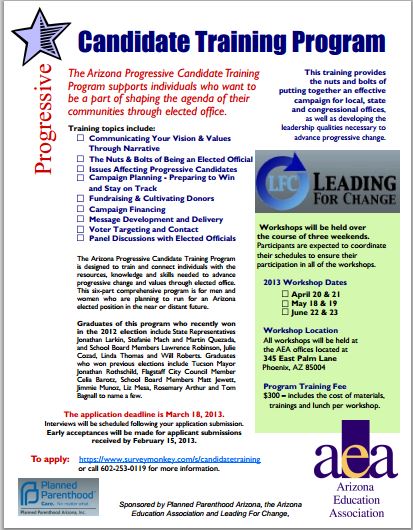 Does Arizona need legislation that is a little more crystal clear?  How about Louisiana’s new law, which states that "no representative of a business or organization that performs abortion may provide instruction in schools that receive state funding."

“Louisiana families should know that their children aren’t being targeted by groups that have financial incentives to subtly sell abortion and other irresponsible behavior that is dangerous to the health and safety of children,” she said. She said pro-life groups should work to “stop abortion organizations from accessing school children.”  See Louisiana Booting Abortion Business From Schools.

You and your child don’t have a whisper of a chance against this leviathan.  Side step the anguish.  Pull your children out of your local Progressive Public School and place them in a school that honors your values as much as you do.