Three months older than co-signer Edward Rutledge, Thomas Lynch, Jr., at age 26 was the second youngest signer of the Declaration of Independence.  However, when Thomas Lynch, Jr.’s life tragically ended at age 30, he was the youngest of the signers at their deaths.

The story of Thomas Lynch, Jr., an Episcopalian, is really the story of father and son, for it was Thomas Lynch, Sr. who, had he not suffered a cerebral hemorrhage in early 1776, from which he never sufficiently recovered, would have signed the Declaration of Independence, along with his son.  He is the only Founding father whose son was elected to replace his father.  Lynch, Sr. was a prominent politician who played a pivotal role in events leading up to the American Revolution.

He was a member of the Charleston Library Society (1764-1779) and the first president of the Winyah Indigo Society in Georgetown, which supported a library and school, which was attended by children of the planters, townspeople, and the poor. His son attended this school before Lynch, Sr. sent him to England to study. Lynch, Sr. also held many other local positions.

Thomas Lynch, Sr., was a planter whose family emigrated to the colonies from Ireland in 1667.     He was one of the most successful indigo and rice planters, the second wealthiest individual, and a leading statesman in the Colony between 1751 and 1776.  He sacrificed his own fortune through his deep commitment to independence. He often spoke out against the Crown on issues of royal encroachment against American liberties, and was elected to the Stamp Act Congress in New York, along with Christopher Gadsden and John Rutledge, in 1765.  He, along with James Otis and Thomas Kean, authored a petition to repeal the Stamp Act.

In 1774, he was elected as a delegate from South Carolina along with Christopher Gadsden, Henry Middleton, and John and Edward Rutledge to the First Continental Congress in Philadelphia.   During the first month of the congress, he and the other delegates drafted the Declaration of Rights. The draft included the concepts of life, liberty, and property as well as American disdain regarding English tyranny in the colonies. When the Second Continental Congress convened in 1775 with the same South Carolina delegation, Lynch, Sr. assisted in the formation of the Continental Army.  In October of the same year, congress appointed Lynch, Sr., Benjamin Franklin, and Colonel Benjamin Harrison as domestic advisors to General George Washington.   See The Continental Congress.

He had the respect of the Second Continental Congress to influence the appointment of George Washington as the Commander-in-Chief of the Continental Army, even though Washington was not the first choice of many.

In early 1776, while conferring with General Charles Lee and the Committee of Safety, Thomas Lynch, Sr. suffered a cerebral hemorrhage. His condition was unstable for at least a month. Through his father’s political influence, Thomas Lynch, Jr. was elected as an affiliate delegate to South Carolina’s Second Provincial Congress to assist his father.   Lynch, Sr. did not recover sufficiently to retake his seat in the Second Continental Congress; however, he did remain a member of the South Carolina delegation. A space was left between the signatures of Edward Rutledge and Thomas Heyward, Jr. for Thomas Lynch, Sr. in hopes that he might one day recover to affix his signature. He didn’t.

In late 1776, a very ill father and son set out to return to South Carolina.  The pair traveled by land because the British controlled the sea at this point. In Annapolis, Maryland, Lynch, Sr. suffered a stroke and died at the age of 50.

Thomas Lynch, Jr., Signer of the Declaration of Independence

Thomas Lynch, Jr., the only son of Thomas Lynch, Sr. and Elizabeth Allston Lynch, was born on August 5, 1749, at Hopsewee Plantation in Prince George Parish, Winyah, in the province of South Carolina. The home still exists today on 58 acres along the Santee River, preserved and cared for by private owner families. 0nly five families have owned it, although it was built almost 40 years before the Revolutionary War. The house is still a private residence.

At an early age, young Thomas Lynch, Jr., was sent to the Indigo Society School in Georgetown, South Carolina. Before he had reached his thirteenth year, his father sent him to England to the collegiate institution of Eton, after which Thomas, Jr. entered Cambridge, where he earned a degree.  According to his tutors, Thomas, Jr. "excelled in his classical attainments, and virtues of his character."  Thomas, Sr. encouraged his son to study law at the Middle Temple in London, which he did.  He devoted himself to the philosophy of jurisprudence and made the acquaintance of some leading politicians.  He also learned the ways of the government.

His experiences in England were very similar to those of Thomas Heywood, Jr., another signer of the Declaration of Independence.  He knew of the discontent from his native land, and was appalled by the haughty tone of British statesmen when speaking of the colonies.  After an absence of eight or nine years, young Mr. Lynch returned to South Carolina. By then, he was an educated and accomplished man.

He married Elizabeth Shubrick, a young lady he had known since childhood, on May 13, 1772.  They had no children.

Thomas Lynch, Jr., decided against the practice of law, and became a planter like his father, who gave him Peachtree Plantation as a wedding gift.  He also caught the spirit of his father to stand up and breast the storm of the Revolution. From 1773 forward, he addressed numerous assemblies with a patriotic eloquence.

He quickly became much sought after for public service, becoming a member of the colony’s first and second Provincial Congress (1774-1776) and the Constitutional Committee for South Carolina, where he helped draft the state constitution.  When the first provincial regiment was raised in South Carolina in 1775, a captain’s commission was accepted by young Mr. Lynch, and in company with C. C. Pinckney, he made a recruiting excursion into North Carolina to raise the company he was to command. In this service, he was exposed to malarial mosquitoes.  His health received a shock from which it never fully recovered.

He raised his company, and they joined his regiment, only to learn a few days later of the sudden and incapacitating illness of his father from a paralyzing stroke in Philadelphia, which caused the father to resign his seat in Congress. The Provincial Assembly elected young Lynch to fill it, and he hastened to Philadelphia to take his seat in 1776. Lynch and his father thus had the unique distinction of being the only father-son team of representatives to the Congress.  He supported the proposition for independence and voted for the Declaration, and on August 2, 1776, three days before his twenty-seventh birthday, he joined the other South Carolina delegates in signing it.  His father’s health worsened, so father and son began a slow trip home.  They got as far as Annapolis, Maryland, where Thomas Lynch, Sr.died and was buried.

Thomas and Elizabeth, Lost at Sea

When Thomas Lynch, Jr. returned home from Philadelphia, he was a sick man. He retired from public life and lived on at Peachtree Plantation on the Santee River with his wife. The malingering fever contracted from his time in the military service continued wracking his body into worsening health. Upon the advice of his doctors, in 1779 he and his wife decided to travel to France with the hope that therapeutic help there may restore his health. The war, with the possibility of his capture, made ocean travel ever more dangerous, so they embarked for St. Eustatius in the West Indies, to seek out a vessel to transport them to France. On this first leg of the long journey, their ship was last seen when it was but a few days out at sea.

Having had no children, he made out his will before the fateful journey, including provisions for his sisters and step-mother.  The will stipulated that heirs of his sister or female relatives must change their surname to Lynch in order to inherit the family estate. His sister, Sabina, followed his wishes and she and her husband, John Bowman, owned and managed the place until their son came of age. Their son became John Bowman Lynch.  He married and had three sons. However, all three sons died in the American Civil War.

The house at Peachtree burned down in the year 1840, never to be restored.

In early 2013, Dr. Edward M. Gilbreth, a Charleston physician, was feral hog hunting with friends in the nether regions of the Santee Delta, when they stumbled across “a remarkable structure.”

“There was a break in the activity and everybody was enjoying a lovely day in the woods. It was a cool February morning. The sun was out and there were no insects. Any, believe me, any day on the delta when there aren’t any mosquitoes is truly remarkable because they’re usually thick enough to fly up one’s nostrils.  And then all of a sudden it appeared. First as a ghostly mirage hidden among the encroaching vegetation, and then slowly acquiring beautiful form and symmetry as we got closer, a ruin so ancient, unexpected and forgotten that all we could do was gaze in amazement. It was the old Peachtree Plantation house, now a decrepit but proud and symbolic relic of a culture, civilization and people truly gone with the wind.”  See Ruins of Peachtree Plantation house tell a unique story.

Dr. Galbreth didn’t include any photos in his article, but  Kendanne M. Altizer included several in her "Thesis Presented to the Graduate School of Clemson University In Partial Fulfillment of the Requirements for the Degree Master of Science Historic Preservation, May 2014".

This is very likely what he and his friends saw. 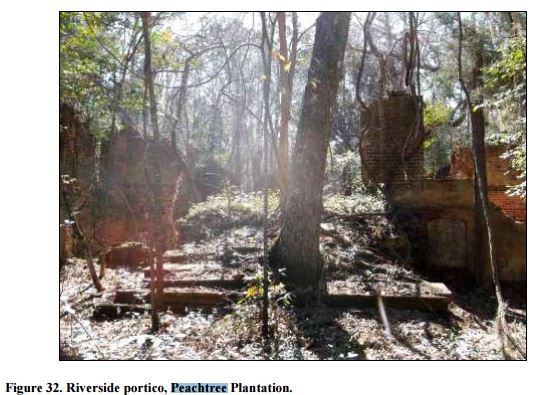 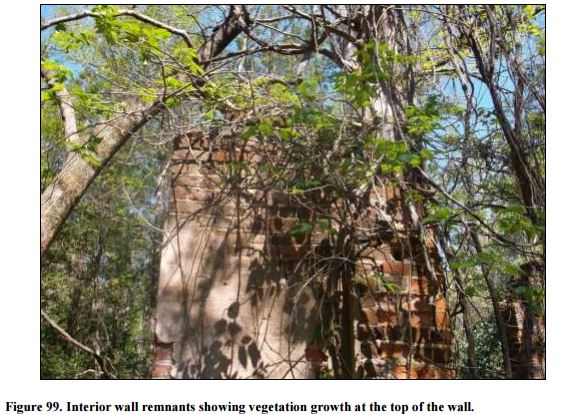 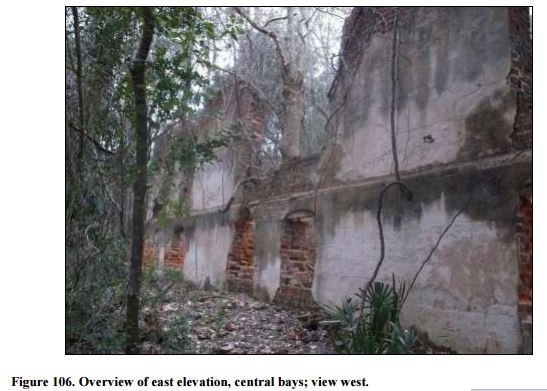 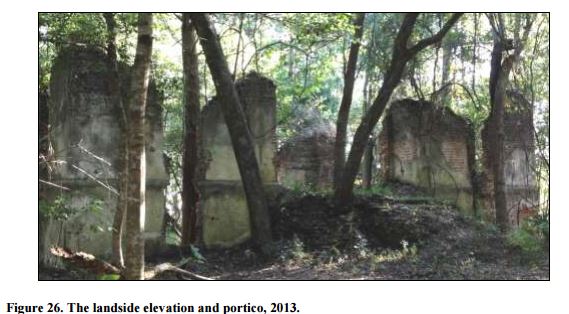