SB 1455 will be voted on by Arizona Senators on Monday, March 7, during the "Third Read" at 1:30 pm.  This bill, sponsored by Sen. Sylvia Allen, gives parents the legal authority to opt their children out of the statewide assessment adopted by the State Board of Education, including AzMERIT, with no penalty to the child, school, or school district.

Please call your and other Senators’ offices beginning now and leave a voicemail message.  Follow up again Monday morning.  Ask them to please vote YES to SB 1455 during the Third Read on Monday.  See list of senators, with phone numbers and email addresses, by clicking on this article titled Opt Out Bill Hearing Today (UPDATE).

Last session, a similar bill failed by ONE VOTE.  This session, all senators are under extreme pressure by special interests that stand to gain money, power, school rankings, human cogs in the corporate machine, and private student data by keeping both Common Core and standardized testing in place.  It’s an election year for these senators.  Click HERE for the live proceedings and watch how they vote!

During last Thursday’s COW (Committee of the Whole), Senator Allen supported SB1455 by citing  ARS 1-601, which declares the "fundamental right of parents to direct the upbringing, education, health care and mental health of their children is a fundamental right."  She also cited ESSA provisions that allow states and parents to opt students out of standardized testing.

Statewide assessments are among the most controversial and least effective methods of assessing a child’s educational progress. If parents across the country are opting their children out of statewide assessments, there’s a good reason.

For those who are interested in knowing more about  why parents despise AzMERIT and standardized testing, keep reading.

Who is Education for?  Education is for the benefit and growth of individual students.  Teachers differentiate instruction to meet the needs of each student.  Education should not serve financial or data interests, research opportunities, job requirements of corporations, school ratings, or the federal government.

Who directs the education of a child?  The parent.

A. The liberty of parents to direct the upbringing, education, health care and mental health of their children is a fundamental right.

B. This state, any political subdivision of this state or any other governmental entity shall not infringe on these rights without demonstrating that the compelling governmental interest as applied to the child involved is of the highest order, is narrowly tailored and is not otherwise served by a less restrictive means.

The opinions of various Attorneys General mean nothing to parents who have a far better understanding of ARS 1-601. In fact Attorney General Mark Brnovich based his opinion on a faulty premise.  He incorrectly assumed that the primary purpose of Arizona schools is for the "benefit and growth of individual students."  How wrong he was.

The special interests of Arizona School Administrators Assn, Chambers of Commerce, Arizona School Boards Association, Arizona Charter Schools Association, schools with “bad teachers” or “bad parents,” or any other group, do not trump ARS 1-601, the basic, fundamental rights of parents to “direct the upbringing, education, health care and mental health of their children.”

Better methods of evaluating student needs and progress already exist. Careful observations and documentation of student work and behaviors by trained teachers is more helpful than a one-time test. Assessment based on student performance on real learning tasks is more useful for measuring achievement and provides more information for teaching than multiple-choice achievement tests.  See How Standardized Testing Damages Education.

It is appalling that those who demand that all parents submit their child to testing do so because it serves as a tool to assess Teacher and/or School’s Effectiveness.  Especially since we know that testing is useful to those for whom data is a commodity. That commodity can include Non-Cognitive data which has virtually no direct benefit to the student.

“Using our kids as experimental laboratory rats, without the informed written consent of parents, to achieve ‘career and college readiness’ is unethical by any professional standard, and is a direct affront to our God given and Constitutionally protected right as parents to protect, raise and nurture our children without invasive governmental interventions. Parents are, and must always be, the resident experts of their own children.”  Dr. Gary Thompson, Utah Child Clinical Psychologist.   See letter dated Feb. 21, 2016, to the Utah State House of Representatives, warning them about the SAGE test.

A schools’ standardized test scores are one of the least important pieces of information parents consider when choosing a school.  Here is a research study done by the Friedman Foundation on how parents choose schools.  Curriculum, student-to-teacher ratios, college acceptance rates, and location are the highest factors.  See More than Scores.

Several other states, both Red and Blue, respect Parental Authority to Opt Out of testing.  Last June, Oregon passed a law that requires districts to notify parents that they have a right to opt their students out of state exams for any reason at all.  California law allows parents to exempt their children out of the state’s assessment system.

“The Feds gave the states a great little ‘bullying toolkit’ which basically says, ‘these parents aren’t afraid of us. Make sure they’re afraid of YOU.’ They came up short on one key fact: the USDOE and the SED have no authority to strip our schools of funding for a parent-led action. Our schools are in compliance. Our children are administered the test. We, the parents, direct our children not to take it.”

"Rockville Centre School Superintendent, William Johnson said, ‘No parent in their right mind would allow their kid to take the state test this year.’"

“Opt out is mainstream. The Ohio legislature is considering a bill that would take opt out students out of accountability reporting (presently their scores are counted as zero), which would, in turn, result in less local resistance to parent requests.  See The testing opt-out movement is growing, despite government efforts to kill it.

Even the leader of the Florida House Democrats, Mark Pafford, publicly urged parents to opt their students out of the tests.  He stated, in part: "I hope that parents take time to understand that their children are being subjected to tests that, in the end, don’t amount to much.  The data that comes from those tests sometimes comes so late, it doesn’t matter. And, frankly … you have to question the purpose of these tests, whether they’re being used in the best way for children in advancing the public education system, or whether, in fact, they’re being used to create a bastardized type of education system that’s dependent on the private sector.” If you’re opting children out of these tests, there’s a reason…  Civil disobedience is beginning to rear its head…I applaud those parents who have the courage to do it."

Before the Senate floor vote on the ESSA, Senator Lamar Alexander praised the bill for its structure that recognizes parental authority and their right to opt children out of standardized testing.

The standardized testing model adopted by Arizona’s State Board of Education does not identify what students have learned.   At the Feb. 18, 2016 Senate Ed. Committee meeting, Ms. Karol Schmidt, of the SBE, referenced a 12/22/2015 letter she received from Ann Whelan, on behalf of the Assistant Secretary for Elementary and Secondary Education.

Ms. Schmidt did not mention this portion of that letter:   “…all tests should be worth taking, offer students an opportunity to learn while they take them, and allow them to apply real-world skills to meaningful problems. Tests must accommodate the needs of all students and measure student success in a fair, valid, and reliable way.”

Nor did Ms. Schmidt mention that the 12/22/2015 letter referred the States to “useful information regarding assessments in the Administration’s Testing Action Plan, released in October 2015.“   This document advises states that their assessments must meet the following requirements:  They must be: 1) Worth taking, 2) High quality, 3) Time limited, 4) Fair and Supportive of Fairness in Equity in Educational Opportunity, 5) Fully Transparent to Students and Parents,  6) Just One of Multiple Measures, 7) Tied to Improved Learning.

The irony is that AzMERIT meets none of these requirements, but the tests that local school teachers routinely give students do!  See State School Board Member Dismantles Federal Reminder on Standardized Testing.  See also AzMERIT and the Arizona Bar Exam.

Taking Title I money away from the neediest students in order to punish parents who are boycotting a testing system that is out of control is not defensible. Any lawmaker or  policymaker taking this course of threatening action would be under extreme political fall-out from the  people they serve.  See U.S. Education Department threatens to sanction states over test opt-outs

In fact, under NCLB, the Feds threatened to take Title I money as punishment for Opt Out.  But never took action to do so.  It is morally bankrupt and a political football no one would want to play with to say: ”Let’s punish the students needing the most resources because other students are not taking a particular test.”

U.S. Chamber of Commerce vowed last year to apply “political pressure around the clock,” according to Breitbart News.

More on Common Core: It’s about snooping, not standards.

The following Request To Speak (RTS) comments show the organizations that are against Parental Rights. 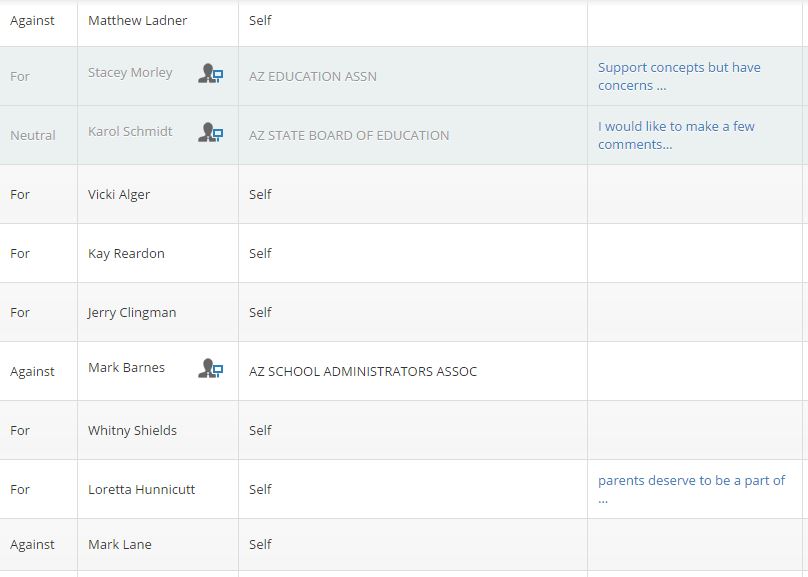 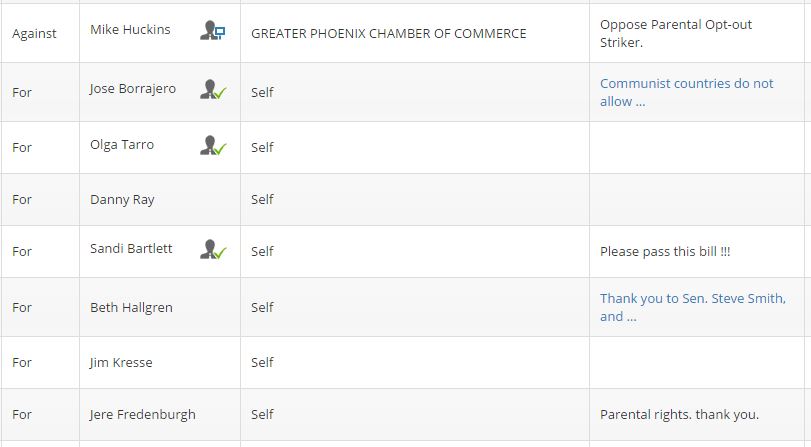 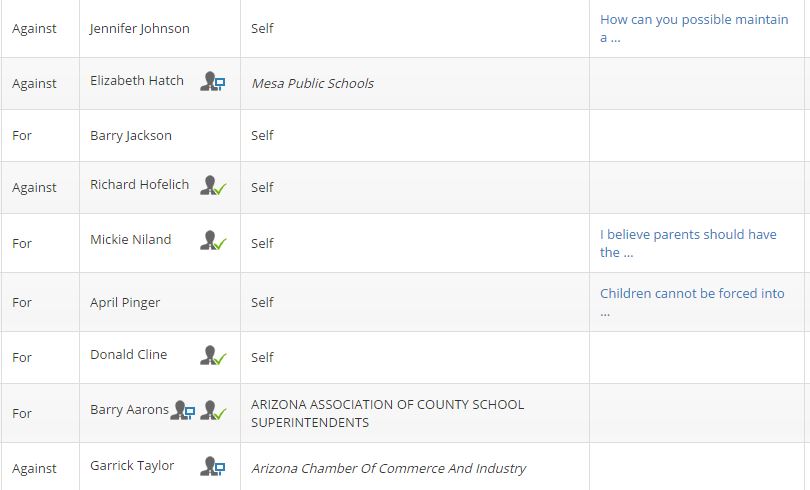 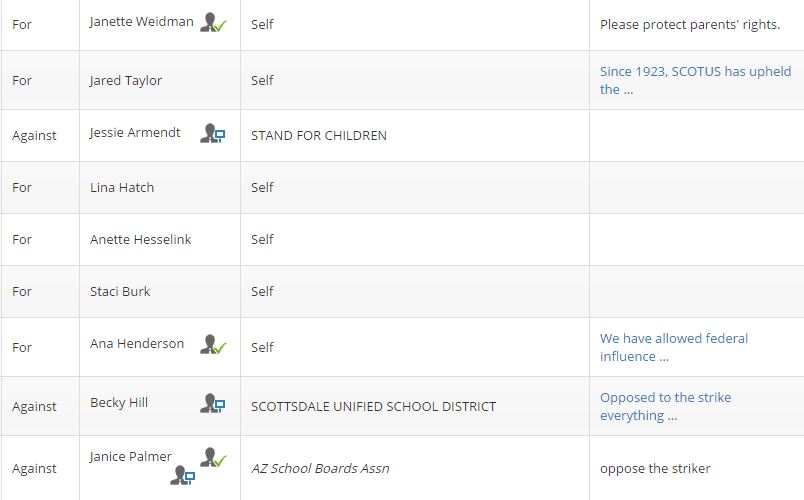