Maricopa County Superior Court Judge David Udall has ruled that Mesa property owners won’t be on the hook for $130,000,000 for a 1.9 mile light rail extension that 98% of them will never use, so there is no need for the Mesa taxpayers to have a vote on the project.

The extension will run along Main Street, from Mesa Drive to Gilbert Rd.

Mesa resident and business owner Joe Price, through his attorney Gary Lassen, had filed a lawsuit presenting facts and precedents which they asserted clearly demonstrates the Arizona Constitution’s requirement that a public vote was mandated.

The judge rejected the plaintiff’s arguments, stating that the funding will come from TPANs (Transit-Project Advancement notes), and that the law states that the notes "are not general obligations of a political subdivision" and that they are to be paid from transportation funds or "other monies lawfully available for application to that purpose."  Thus, the law does not require a public vote before TPANs are issued.

Gubernatorial candidate Scott "Light Rail" Smith (aka Scott "Common Core" Smith) came up with this  funding scheme that gets around the pesky public vote.  Were there’s a determination to spend taxpayer dollars on government boondoggles, there’s a "funding mechanism" to the rescue.

The judge is basically saying that if things go haywire, the buyers of the TPANs get stuck, not the Mesa taxpayers.  Mr. Price, who also publishes Mesa Watch, says this is nonsense.  Sophisticated buyers of millions of dollars in municipal bonds will want some guarantees.

This is the type of building project that Light Rail has brought to Main Street in Mesa and all down Apache Boulevard in Tempe. 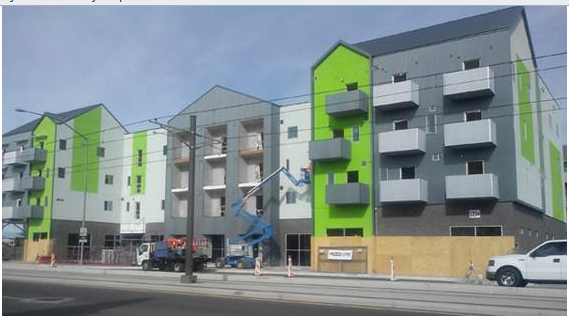 In case you were wondering: that IS the final color.  This was funded in part by you (through the City of Mesa and AZ Department of Housing); and you can see it in person if you drive west from Main and Dobson.

"I challenge any Light Rail proponent to get in your car and drive from Mesa Drive to downtown Phoenix and then say Light Rail is an economic success. It isn’t. It’s a job killer. And every mile Valley Metro and Mesa builds costs about $60 million a mile to construct. And about $2 million per mile every year to operate and maintain," states Price.

Mr. Price asserts, "The TPAN statute as used by Mesa is a blatant method to avoid the constitutional mandate for a public vote to issue debt obligations.  Concocted by the legislature, it  gives cities free rein to do about anything without using property taxes. So sales taxes are free game."

He also states that, "There are no federal transportation projects from which payment for the notes could be made. The excise taxes are the sales taxes paid to the city. How that doesn’t trigger the Arizona constitutional requirements for a public election, I don’t understand."

Judge David Udall relied on the defendant’s argument based on the TPAN legislation. TPANs allow the municipality, in this case Mesa, to repurpose federal transportation project funds to be used for different projects other than the projects which the funds were originally intended.

According to Price, "Mesa proposed using 16 different federal projects for which it hoped funds would become available. Eight of those projects were completed and paid by developers. The other 8 projects have never received approval for federal funding. In fact, it is uncertain Mesa will ever get the funds for the 8 projects. If no federal money is received, Mesa will repay the $130 million in TPAN notes with sales taxes paid by Mesa taxpayers. My opinion is that the defendant, the City of Mesa, always planned to use city sales taxes to repay the TPAN notes.

"Light Rail trains are inherently dangerous. There have been many accidents along the rail lines already built. Some with fatalities. It is impossible to get across the street while driving unless there is a round-about. Some of these are located as far as a half a mile apart. The entire commercially zoned areas of Main Street will be diminished greatly. Property values will plummet. Valley Metro and the City of Mesa have decided to change the character of this area to that of a train track.

Mr. Price commends his attorney for doing a great job, for a minimal $2500 fee.  According to Price, Gary Lassen did a lot of work which was uncompensated.  He was up against Mesa’s unlimited taxpayer money, in addition to the Mesa establishment political machine.

Mr. Price and his group would like to file an appeal; however, they are in need of funds.  He is hoping that a constitutional lawyer might be interested in the appeal and take it on pro bono or with court costs covered, or for a minimal fee.

Judge David Udall avoided making a  determination if the TPAN law is constitutional. And also Mesa’s use of the law to avoid a public vote.

One bit of good news though. Prop 207, passed by Arizona voters, allows for just compensation from the diminishment of property values from government activities. Now, the property owners hurt by this government boondoggle can receive justice. Something that is not guaranteed in the courts.