Gilbert Superintendent of Schools Dave Allison and others have stated that more money handed over to the schools results in better academic performance.  They assert that the defeat of the property tax override and Prop 204 means that Arizona voters don’t understand this, or they don’t care. 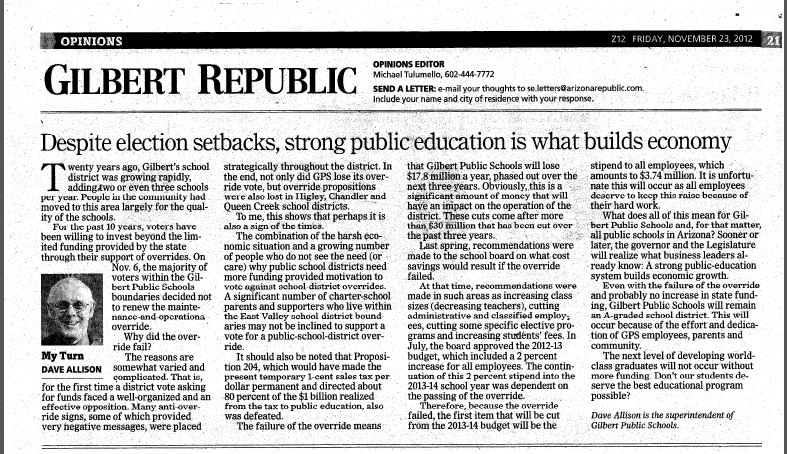 They also blame negative messaging, the poor economy, charter school parents who live in the district, etc., for the defeat of these two tax increases. Dave Allison promises to make good on his threat to deprive teachers and administrators of their salary increases received last summer.

The defeat of these tax increases was a No Confidence vote to the incumbent District and Governing Board leadership.

Keep in mind that during much of this time, the District was receiving and still is receiving the 10% override monies, in addition to the 1-cent temporary sales tax approved by voters just a couple of years ago.  Yet, GUSD went from putting 63.4% toward the classroom before all of this, to 59.9% in spite of the influx of money they managed to make us feel guilty enough to give them.

Dave Allison and those who covet a bottomless pit of tax dollars also lament the defeat of Prop 204.

As for Prop 204, AZ Treasurer Doug Ducey stated:  “Proposition 204 will NOT help teachers or students, but will instead continue to reward an education system that has increasingly spent less and less money in the classroom.”

Arizona voters want their hard-earned tax dollars to be spent in the classroom.  Gilbert voters know that the current Administration and previous governing board have proven incapable of getting them there.