Please don’t miss this special fundraiser on behalf of Dr. Ralph Heap’s candidacy for Arizona Senate in Legislative District 25.  He is running against incumbent Bob Worsley. 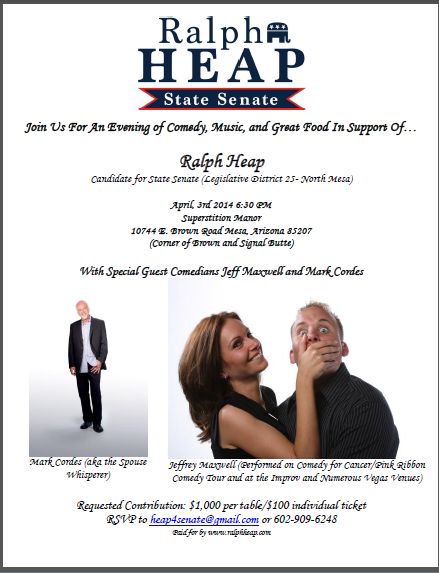 "Remember, Obamacare is not about health insurance for the poor.  It is about control of one-sixth of our economy," states Dr. Heap.

“I believe in the promise of America,and I will work hard to fulfill that promise. This is the greatest nation on earth, and its greatness lies in the brilliance of the Constitution. Everything good about America stems from the liberties protected by this majestic document.

"We stand at a crossroads.  One of the biggest problems we face today is the takeover by the federal government of our healthcare system.  Unless many of us in the medical profession stand up to these bureaucrats, we face a dismal future.

"From the youngest to the oldest, from the healthiest to the sickest, no one will be untouched by this federal power grab.  I hope to accomplish many things if I am elected, including fixing our healthcare system, preserving the Constitution, reigning in the EPA, strengthening our schools, supporting our law enforcement officers,  lowering taxes, decreasing regulations, and shrinking government.  Preserving liberty means less government and more individual freedom. That is my goal.”

Dr. Ralph Heap was born and raised in Arizona and has lived in Mesa for more than 30 years.  He grew up in a family that stressed hard work, competition, and self-reliance.  He loved football and played in high school, but he knew from an early age that he wanted to be a doctor and worked hard to achieve that goal.

After a 2 year mission for his church to Holland, Ralph returned and married his high school sweetheart, Denise, in 1974.   Many know him as the football team doctor at Mountain View High School.  In his spare time, Dr. Heap likes to toss a football around with his grandsons and his nephew, former NFL football player, Todd Heap.  He also plays the banjo in the “Red Mountain Bluegrass Band,” a Heap family band started by his father.  An avid reader, outdoorsman, and athlete, Dr. Heap has completed many long distance biking and running events.

One of the highlights of his medical school training was a three-month stint at a Nazarene Mission hospital in a Papua, New Guinea, providing free medical care to a population living in primitive conditions.  During that time, Dr. Heap treated everything from spear and hatchet wounds to parasitic infections.  His experience in New Guinea motivated him to use his medical skills to treat those in need all around the world, with over 25 trips pro-bono to third world countries. Dr. Heap has volunteered his time and orthopedic surgery skills, especially for children, to several humanitarian organizations in places like Bolivia, Tonga, Nicaragua, Brazil, and Zimbabwe. He was stranded in Bolivia in September, 2001, when the 9/11 attacks caused his flight back to the U.S. to be canceled. Denise, a nurse, has joined him on many trips.  He and Denise lived in Africa for 18 months from 2008 to 2010 while Dr. Heap was the medical advisor on a mission for the LDS church.

He and Denise have three grown children and seven grandchildren. Kris, his oldest son, is a dentist in Mesa, his daughter Heather is a teacher, and youngest son Justin is an attorney.