Conservatism 101:  Stick to your principles.  Work out the details, compromise on policy later.

Conservatism 102:  Fool me once, shame on you.  Fool me twice, shame on me.  Fool me 3 times, I must be a Republican.  (Conservatives: Don’t let this happen to you!)

For the last several weeks, the current school board has been reviewing various 2013-2014 GPS budget scenarios drawn up by GPS District Administrator Clyde Dangerfield and his Budget Committee. 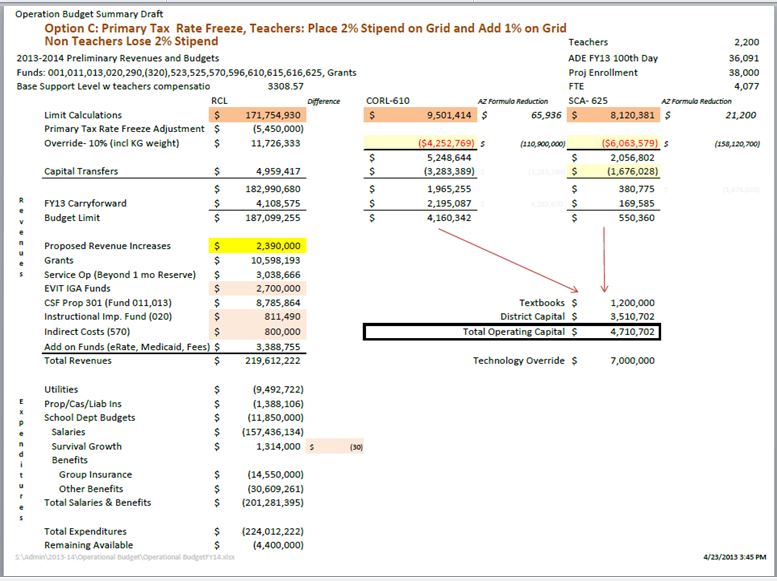 The conservative majority board members are getting hammered by the liberals, and even some conservatives, to approve a budget that would raise the Primary Property Tax rate!

What!!  Why would Conservatives insist that the conservative majority raise the Primary Property Tax rate?  (No wonder we have trouble getting conservatives to run for office.)

The District puts the Board (and the public) into a corner to force them to make the Administration’s predetermined decision.  That decision is:  “Raise the Primary Property Tax Rate.”   They plead, “We lost the override dollars when voters voted against it"!  "We’ve been cutting back since the economy soured in 2008”!   "We’ve cut to the bone"!   "It’s for the children"!  "The taxpayers won’t notice"!  "It’s only a cup of coffee to them, but it means so much to us!”

Sometimes it’s tough for perpetually self-sacrificing, economically depressed, battle-weary Conservatives to maintain their perspective.  Consider the following Facts, followed by a Walk Down Memory Lane.  The board plans to look at the final proposed budget on June 25 and a vote on adopting the budget July 9.  So, beginning right now, please send an email expressing your views to the Board members (board@gilbertschools.net) and to Dave Allison (Dave.Allison@gilbertschools.net) and Clyde Dangerfield (Clyde.Dangerfield@gilbertschools.net).

Gilbert resident Gordon Ray sent the following email.  He explains how fiscally responsible adults reduce spending.  Of course, this only works for people who have an honest desire to responsibly reduce spending.

Please do NOT raise the property tax rate.  We are taxed now more than we have ever been taxed before in the history of our country!  We need to take a hard look at each and every budget item.

Put the cost next to each budget item.

Go through the entire list and scratch off all items that are only “nice” to have but that are not totally necessary.

Then start at the bottom of the new list and scratch off every item until your income matches the expenses.

The budget will balance every time and the most people will be served at the same time. Adjust as circumstances change and needs arise.

Gilbert voters said NO to the tax override, which has resulted in a loss of about $5.5 million in revenues. The value of Gilbert homes has decreased, so property tax revenues have declined.  Some homeowners did not pay their taxes at all, and this puts a burden on other taxpaying homeowners.  The District doesn’t know how much State money they will receive.  So, their budget has provided an estimate.

Last year, the previous Governing Board raised the Primary Property Tax Rate by 40%.  Part of the reason for a decrease in current property tax revenues is because 10% of homeowners did NOT pay their property taxes.  Do you know why?   These are people who have either lost their homes, or they are elderly people on fixed incomes who must choose between paying for higher medical expenses, food, or their property taxes.  Should they be forced out of their homes?

Do you recognize that this is a sign that a community is in serious economic distress?

Keep in mind that the Board will be hiring a new Superintendent.  Also, the board has required the District to zero base its budget for next year.  Both of these actions should bring more accountability to the District.  Thus, 2014-2015 is a new day.

The board should NOT raise the Primary Property Tax, and it should instruct the District to look at their thousands of line item expenses and remove non-essential spending and trim the rest.  (Follow Gordon Ray’s advice.)

A Walk Down Memory Lane with District Officials You Can "Trust"

July 2, 2012.  Gilbert Governing Board raises the Primary Property Tax rate by 40%.  (NOTE:  Board member Staci Burk was the only  member to vote against it.)  “Nancy Genys, who had two children graduate from the district, said she was "outraged" with the tax increase. "In our private lives, if we don’t have money, we don’t have the ability to take it from another," said Genys, who was one of four who spoke out at the meeting. "It’s morally wrong. Look at your budgets and cut back."  See also Gilbert’s Tax Rate History.

October 2012:  Gilbert Public Schools Override in Question in Nov. 6 Vote.  “If the override fails, property owners would see a decrease in taxes as the override is phased out in its sixth and seventh years.”

October 2012.  Without a thorough investigation, District Officials recommend closing Gilbert Junior High School.  Board member Staci Burk votes against the measure stating that not enough information was presented to make the decision.  Later, a group of parents came up with the questions that District Officials had ignored.  49 Questions Posed to Gilbert School District Officials.

December 2012.  GPS Leadership Legacy:  Retaliation to the Last Drop.   "Whether it’s voting against prayer to open their meetings, refusing to hold the Superintendent accountable to measurable performance criteria,  refusing to involve the community in closing a school, trying to fire or punish teachers who stand up to bullying, or discriminating against special needs students, the incumbent Board and District officials are the experts."

March 6, 2013.   GPS Teachers Likely to Get 3% Pay Raise .  The Conservative majority fulfill campaign promise that they have two Priorities:  Teachers and Students.

March 26, 2013.  GPS District Officials present Board with Options A and B budgets.  (See Option A below.)  Both are based on increasing the Primary Property Tax Rate.  These budget projections are very interestng.  Notice EVIT funds dropped to $2.4 million.  (It was $2.7 million in 2012.)   Dave Allison stated on April 9 that they expected $300k more in EVIT funds.  So, guess what, the next budget for April 9 showed $300k, bringing the total to $2.7 million.  That’s odd.  I thought if you add $300k to $2.7 million, you get $3 million.  ALSO, both Budgets A & B show that Utilities INCREASED over 2012.  Pres. Staci Burk asked Disrict Officials,  "I thought we were supposed to see a reduction in utility bills after the $6.8 million contract with Climatec."  Oh.  Oops!  The District Officials fixed the fudge, so the April 9 budget showed a reduction in Utilities.   See $6.8 Million for New Light Bulbs.

April 9, 2013.  Gilbert School District Continues Work to solve Next Year’s $6 million Shortfall.  "On April 9, Allison told the board the district will save close to $916,000 in utility costs because of efforts at schools and installation of energy-saving measures. The district also expects to receive $300,000 more from the East Valley Institute of Technology next year because more high school students are expected to take career and technical training school classes.  With that in mind, Allison presented two budget ideas to the governing board April 9 based on Gov. Jan Brewer’s budget proposal for the state next year."

April 24, 2013.  Gilbert School Board Eyes Inevitable Cuts to Budget.  "After the meeting, Humpherys said, ‘I will just have to wait and see what the cuts would be.’ She expressed concern about already-large classes at some schools, adding, ‘We have to understand that Arizona is not investing in education the same way other states are.’"   She’s right.  Some states spend lots more on District Officials and Administrative salaries.  She’s wrong, however that more money = better educated students.  It’s how you spend it, as Westie Connect has reported.  "Dr. Hanushek’s research supports the conclusion that HOW money is spent is much more important than HOW MUCH money is spent. This research relates the high cost and the general ineffectiveness of class size reduction. At the same time, Dr. Hanushek’s research also documented the overwhelming importance of teacher quality."

April 24, 2013.  Gilbert District Votes Down Pay Hikes for Support Staff, Administrators.   "If we commit 1 percent, we’re looking at people losing their jobs if the Legislature doesn’t like the governor’s budget,” Burk said. “It’s irresponsible to give 1 percent on the risk of some other employee losing their job in June.”  Burk added that it’s easier to give out money when the district gets it than to “offer money we don’t have.”

April 24, 2013.  Gilbert School Board Members ask District to Look for More Cuts.    “I believe the question we should be asking as a board and district is, ‘What is the quality of education we want our students to have? When we look at that, we will want to align our resources in the best way possible for our students to get the best education they can," Humpherys said.  Board member Julie Smith pointed to her research about education funding.  “There is no established correlation between money spent and quality of education. There are plenty of schools out there that educate their students for very well for far less than we do,” Smith said.

April 2013.   An online Petition is initiated by Susan Keuter, directed at Julie Smith and Daryl Colvin.  See Gilbert Public Schools Governing Board: Do Not Refuse $5.5 million in Property Taxes.  Eliminate Option C.  It states, “Two of our Governing Board Members are having budgets worked up that are based on lowering our Primary Property Tax Rate.  ”    It goes on, “Refusing monies from the state is not an option that makes sense.”  What’s wrong about those statements?  Here’s the Truth:  1) Three board members asked to see a budget that would show no increase in the primary property tax rate.  2) Three board members are NOT refusing money from the State.  Rather, they do not want to raise the primary property tax rate and extract it from the property owners.

4/23/2013.  The Conservative board majority also voted to NOT renew the certified MOU.  See Victory for GPS Teachers: the Real Story about GEA, MOU & GFAK.   "The result of moving the MOU language into district policy is UNPRECEDENTED INPUT and A POWERFUL VOICE FOR TEACHERS. The governing board gave back to teachers what the GEA had taken away."

4/23/2013.  When the Wrong Majority Speaks, call for a Do-Over.  "Another reason for declining revenue to the district is the tax delinquency rate, which rose to 10% from 3%. That means there is quite an increase in people not paying their property taxes and risking losing their homes. When revenues are short due to delinquencies, the rate also goes up to tax others for the lack of revenue from delinquencies.

"The problem is, when does it end? When no Gilbert resident can afford to keep their home? At what point are we cognizant of the simple economics of squeezing blood from a turnip? Many voters have said that if GPS continues to tax a community that is showing outward signs of distress, GPS is contributing to the problem. They point to the fact that the previous board raised taxes just last year." 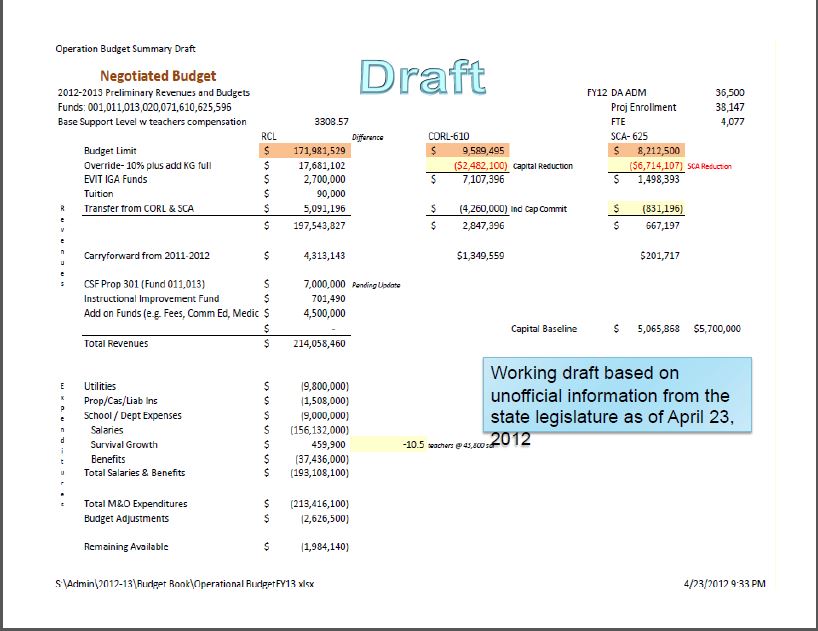 Notice EVIT Funding cut by $300k, instead of increased by $300k.  Then a later budget "reinstates" the $300k back to its 2012 projection, thus it’s "additional money" coming to the District.  Notice Utilities showed no reduction after the $6.8 million investment in Climatec was supposed to, overall, reduce utilities.  Instead, it’s inflated.   President Burk reminded the District Staff they had promised utilities would go DOWN as a result of the Climatec deal.   Clyde Dangerfield’s crack team of highly educated Budget analysts had an OOPS! moment with a $1 million fudge. 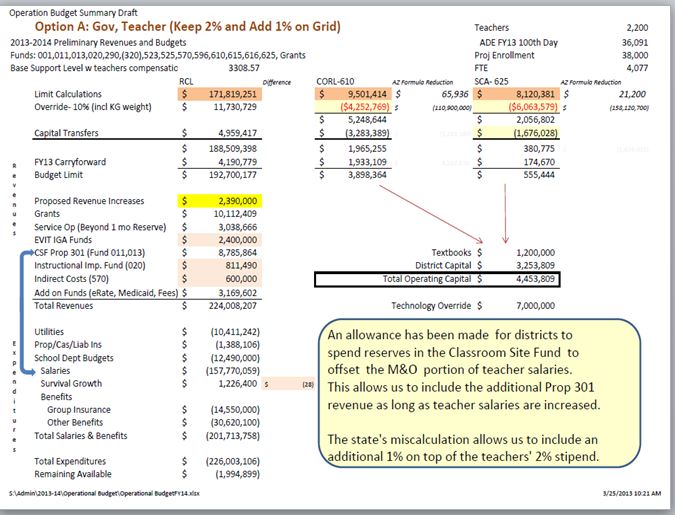