Here we go again.  Zealots from the Left, headed by Randy Parraz, want to neuter our Second Amendment Rights.  They do not believe you have the God-given right to protect yourself, your family, or your property.  What better way to accomplish this than to remove a strong defender of the Second Amendment, Sheriff Joe Arpaio?  Sheriff Arpaio is one of 290 sheriffs (at last count) across America who have vowed to uphold and defend the Constitution against Obama’s unlawful gun control measures.

There are 3,000 sheriffs in America, so you can see why Sheriff Arpaio is such a threat to those who don’t believe law abiding citizens have the right to bear arms.

Parraz and his band of Leftists tried but couldn’t defeat Arpaio in November 2012.  And so they have resorted to using the "shot full of loop-holes" Recall method to get rid of the Sheriff.  And so, we will be subjected to another media circus, including the usual headlines, photo ops, and steady stream of  quotes from Randy “Mr Respectful” Parraz, compliments of his fawning entourage of Peter Pans who call themselves “reporters.”

You remember Parraz, don’t you?  He’s the Alinsky-trained agitator from California who came to Republican Arizona to “change” it.  He’s the Progressive Democrats of America Community Organizer who boasts that he got rid of Senator Russell Pearce, because of Arizona’s “brutal” SB1070.  That’s Arizona’s enforcement against ILLEGAL aliens that was upheld by the "brutal" United States Supreme Court.

Here is Parraz with one of his buddies, the socialist union boss AFL-CIO Richard Trumka. 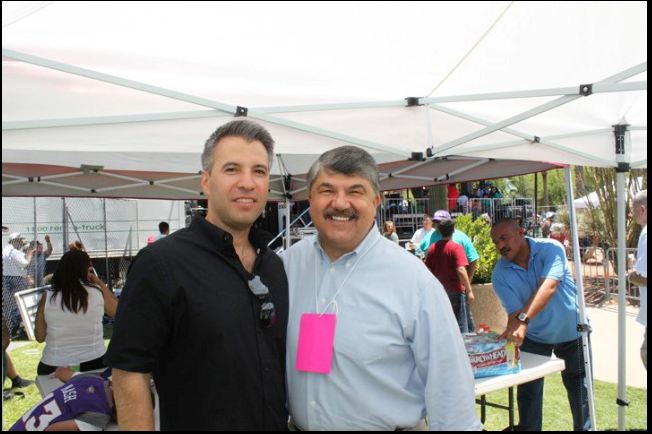 You can expect bully Parraz to regurgitate ad nauseum those “hundreds of unresolved sex cases” that he says Sheriff Arpaio never addressed.  The problem is it’s a lie.   He dregs this up at least once a week, year after year.  After repeating this lie so many times, little old ladies are signing the Recall petition because Arpaio is derelict in his duty to protect children.  The Truth is that Arpaio investigated those cases immediately upon learning about them back in 2008, and he put significant resources toward their resolution.

The irony is that you won’t hear Parraz, or the Peter Pan media, talk about the THOUSANDS of sex crimes against CHILDREN within the Phoenix Police Department, that have been mishandled repeatedly.

Parraz can “live with” thousands of sex cases against children.  He can’t “live with” 432 sex cases that Arpaio put immediate resources to resolve…back in 2008.

I put the Truth out about this more than once on Gilbert Watch.

Another blogger, S.H.I.E.L.D., has written extensively about Parraz dating back to 2011.

What can you do to help?  Know the Truth.  Tell your friends the Truth.  Join the fight against this Recall effort.  Know that Parraz’s intention from Day 1 has been to turn Arizona Blue using both Democrats AND “Moderate” Republicans.  Parraz is smart and has been successful at getting rid of one of the strongest and most effective conservative legislators Arizona has ever known:  Russell Pearce.  Parraz also has financial resources from the Left to keep chipping away at Arizona.