In late April 2017, 16-year old Connor Haines and his sister Lauren, 19, were peacefully protesting against the holocaust of abortion, and sharing the gospel.  They were legally on a public sidewalk outside of STEM Academy, Downingtown, Pennsylvania.   They held signs and were calling out to students and others who were leaving the school in their vehicles.

After a few minutes,  Assistant Principal Zachary Ruff approaches and tells them to get off the public sidewalk.  Connor says they are there legally.  Ruff again orders them to leave.  Connor suggests he call the police.  Connor explains they are protesting the holocaust (abortion) happening in America.  Ruff tells him to leave.  It becomes clear that Connor won’t back down.

In less than a minute from initially ordering Connor and Lauren to leave, Ruff tells Connor to "Go to H**L, where THEY are!"  (Who’s "they"?)  Aborted babies.

Connor stands his ground.  "Sir, these are image bearers of God."  Ruff can’t handle it and begins yelling and screaming at Connor.  Both Connor and his sister remain calm, enduring  Ruff’s nearly 20 minutes of unhinged yelling, threatening, and cursing.  (How many 16-19 year olds do you know who could suffer through this?  Side note:  Both Connor and his sister are home-schooled.  Perhaps they studied examples of great leadership throughout history:  Jesus Christ, Socrates, Cicero, Ghandi, Winston Churchill, Martin Luther King, Jr., et. al.)

Here are some examples of Assistant Principal Ruff’s tirade:

Connor and his sister continue peacefully to speak to passersby.  They also respectfully address Zachary Ruff as "Sir."

At 6:50, Ruff tries to drown them out by singing at the top of his lungs "I Love a Parade."  He keeps this up for another 10 minutes, whenever they speak.

When Connor says, "Jesus Christ can set you free from your sins," Ruff responds:  "This is a public school!  We don’t believe in that here!"

At the very end, Lauren engages a student walking by.  The student takes her brochure.  The Assistant Principal has left.  Connor and Lauren continue calling calling out to passersby, "We’re out here to expose the injustice that is happening in America.  Three thousand human beings are destroyed every single day. If we repent of our sins and turn to Jesus Christ, we can be set free from our sins."

Why can’t the people who educate our childen allow them to think for themselves?  Because, if they did, they would have to admit that an abortion is the murder of an innocent human being, a person.  They would also have to consider that we are all made in the image of God.  The Truth is, even the tiniest embryo reveals God’s perfect design.  It is obvious to those who are willing to open their hearts and minds and see.  Once in the public school system, children are taught to close their hearts, minds, and eyes.  They are ridiculed, ostracized, and despised if they don’t.

Day 1 Conception.  Of the 200,000,000 sperm that try to penetrate the mother’s egg cell, only one succeeds. At that very moment, a new and unique individual is formed. All of the inherited features of this new person are already set – whether it’s a boy or girl, the color of the eyes, the color of the hair, the dimples of the cheeks and the cleft of the chin. He or she is smaller than a grain of sugar, but the instructions are present for all that this person will ever become.  See Milestones of Early Life.

See Here’s an abortion facility’s fake drawing of a baby at nine weeks compared to the reality." 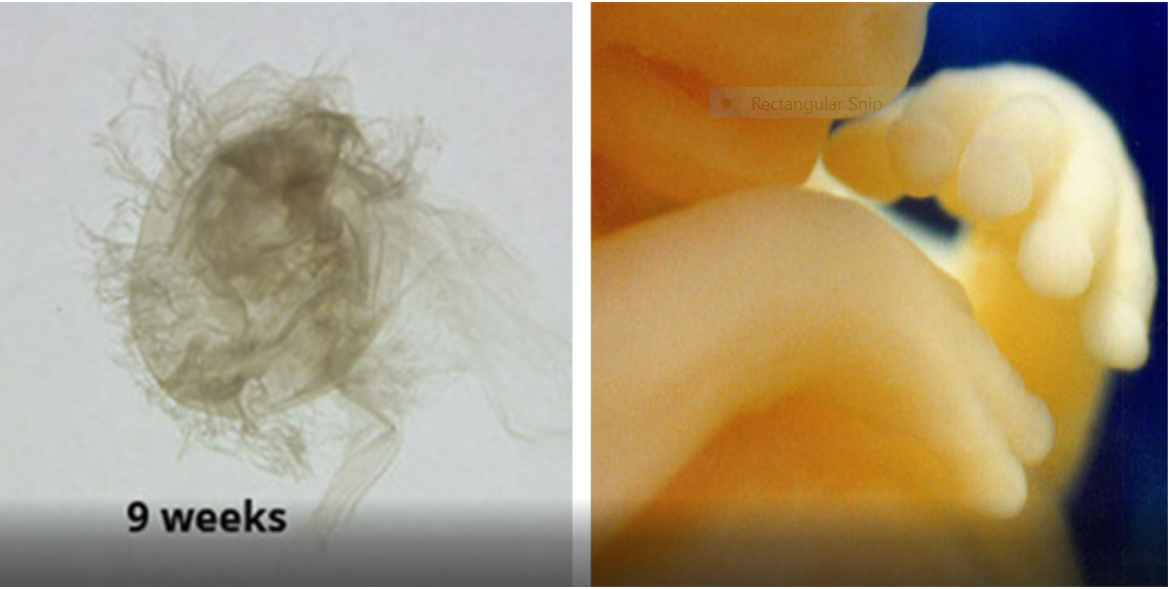