Do you remember back in April 2012 when Senator Russell Pearce pleaded with Bob Worsley to stand with him against the sexual exploitation of children whose bodies were being peddled by the Phoenix New Times BackPage?   Senator Pearce had asked businesses to stop advertising in those pages, because their dollars were helping to fund this depraved sex trafficking of children.  (See Russell Pearce’s press release at the end of this post.)

Instead, Mr. Worsley raked Russell Pearce over the coals, comparing him to Raul Grijalva for "boycotting" Arizona Businesses.

To Worsley, the greater evil was Pearce’s plea to business to stop advertising, NOT the sexual exploitation of children.

Recently, GilbertWatch learned that three Washington state teenagers, two 13-year old girls and one 15-year old, are suing  the corporate owners of Backpage for enabling their captors to force them into the sex trafficking trade.

"Is it proper for some outfit, for some entity, to make millions of dollars not only in trafficking women, but even more importantly trafficking children"? asked Seattle attorney Mike Pfau, who with Erik Bauer represents the teens.  "No. It is absolutely unacceptable."

Maybe Bob Worsley would prefer to stand with Seattle attorney Liz McDougall, who represents Backpage’s corporate owners, who has stated the lawsuit will not pass legal muster and is barred by federal law.

Mr. Worsley:  What are your ideas for stopping the sex trafficking of children?

Mr. Worsley, since the Courts cannot seem to reign in this depravity, what are your ideas for stopping it?  Apparently, NOTHING.  Russell Pearce pleaded with local advertisers to stop advertising in its pages.  You slapped him down for doing that!  He pleaded with you to stand with him!  You ignored him.

So, take a look at the faces of these children who have suffered untold physical, mental and emotional abuse that they will never forget for the rest of their lives.  Explain to them how you really "sympathize," but you just couldn’t bring yourself to side with a political foe and ask businesses to stop advertising in places like the BackPages of the Phoenix New Times.  You know their bodies are being sold in those pages, but your hands are "tied," so to speak.

Did you notice how the attorney representing BackPage.com calls 13-year old and 15-year old children in the lawsuit "young women."  Young women? 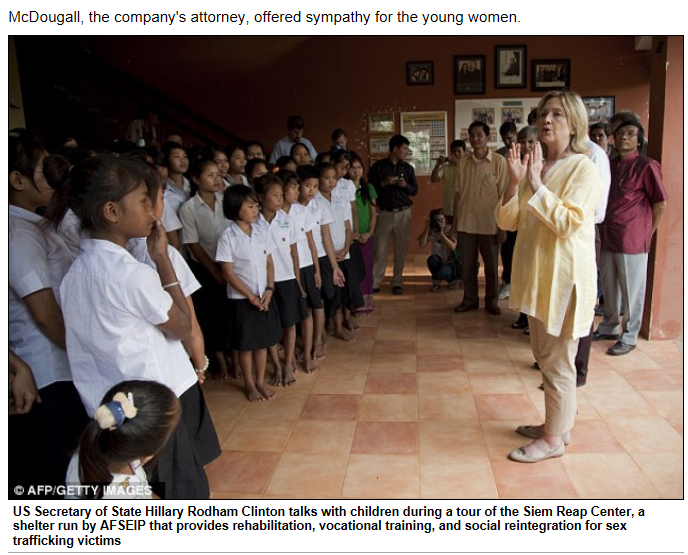 In case you can’t read it, the caption beneath the photo reads:  "US Secretary of State Hillary Rodham Clinton talks with children during a tour of the Siem Reap Center, a shelter run by AFSEIP that provides rehabilitation, vocational training, and social reintegration for sex trafficking victims."

Here is the plea that Russell Pearce made to Bob Worsley, that Worsley chose to ignore.

Yesterday, Bob Worsley’s campaign attacked me and like-minded Arizonans for our efforts to draw attention to–and business away from–the Phoenix New Times and its corporate owner, The Village Voice.  While hypocritically attacking me for some imagined “divisive rhetoric,” Worsley’s campaign offered a strangely disconnected defense of the Phoenix New Times while asking voters to draw a connection between me and Congressman Raul Grijalva.  Worsley’s rhetoric was obviously meant to be divisive, but he could not pick a more ill-fitting pair than me and Grijalva.

“What do Russell Pearce and Raul Grijalva have in common?” asked the press release.  The answer is nothing.  I’m a proven conservative, Raul is a committed liberal.  I have a 100% pro-life, pro-family, pro-Second Amendment voting record, Raul’s is the opposite. I helped to write and pass Arizona’s Jobs Bill and led the passage of the first truly balanced state budget in years, while Grijalva passed ObamaCare and voted for trillion dollar budge deficits.  My actions led to job creation and economic growth, while Grijalva’s led to recession and depression.  I wrote and passed SB1070 to enforce our nation’s immigration laws, while Grijalva opposed our efforts and wrote that the bill was bad for Arizona.

Come to think of it, so did Bob Worsley.  You wouldn’t know that he wrote about it because he deleted part of his writings just after he announced for office, but the same Bob Worsley who wants to attack me for non-existent commonalities with Raul Grijalva wants voters to ignore (or better still never find out) that he shares his illegal immigration ideology with Raul.

In his desperate attempt to try to connect me to Grijalva, Worsley jumps the shark and decided that attempts to change the business practices associated with the New Times and its owner were morally equivalent to Raul Grijalva calling for a boycott of the entire State of Arizona because he disagreed with SB1070 and enforcing the law.

It is worth revisiting the Phoenix New Times and The Village Voice to learn more about the people that Bob Worsley is defending.

According to media reports, The Village Voice and its family of newspapers account for 70% of all prostitution advertising in the United States.  48 State Attorney Generals and 19 U.S. Senators–Republicans and Democrats alike–have called on them to stop running sex ads which have been tied to child sex trafficking, and which collectively finance a national operation of hate campaigns against conservative individuals and organizations, elected officials and public servants, law enforcement and others. Investigations into these crimes have led to more than 50 arrests in 22 states.  Millions of tainted dollars flow into the coffers of these publications and those paying the price are too often themselves victims of the most horrible crimes imaginable.  Human trafficking and child and adult prostitution are horrific, and it is right and justifiable that decent people here in Arizona and across the country draw attention to these crimes and act to hold businesses that profit from them responsible.

While our efforts to let advertisers know the truth about these publications is brand new, we have already been rewarded because the great people at Harkins Theaters and Buddy Stubbs Harley Davidson have pulled their advertising.  Bob Worsley accused me of threatening Harkins Theaters, but his accusations were wildly off the mark.  The good folks at Harkins run a decent, family-oriented business, and they are much better off today knowing the truth about where their advertising dollars were going.  And the people of Arizona will reward Harkins with even more business for being a responsible and family-friendly corporate citizen.

SB1070 was about enforcing laws to keep people safe.  Liberals like Raul Grijalva and Bob Worsley opposed SB1070 and Grijalva went so far as to call for a boycott of his own state because he was mad that it was going to enforce the law.

Exposing the New Times and its corporate model is about exposing human exploitation, indecency, and alledged illegality. Bob Worsley, Sean Noble, and the rest of his political team oppose our efforts because they are desperate to attack me with a ludicrous comparison to Raul Grijalva.  In so doing they take the side of an entity that profits off of some of the worst crimes imaginable.

I am disappointed in Bob and his campaign, both for the position they are taking, the negativity with which they are beginning this campaign, and the very same divisive rhetoric they would accuse me of.

I hope that Bob will change his mind and join those of us who are working to expose these practices.  Decent Arizonans from all over this great state are rallying to the effort and we certainly have room for Bob, Sean and the rest of his team.  We can and ought to be able to agree on the need to end the exploitation of children, and I hope that political ambition does not prevent Team Worsley from getting on the right side of this very important issue.

The citizens of our district deserve an honest and decent debate on the issues facing our state. I hope Mr. Worsley will drop his attacks and join me in that effort.