Randy Parraz, attorney, is well known for his belligerence, agitation, constant disruptions of Maricopa County Board of Supervisor meetings, hatred for SB1070, and no visible means of support.  Community agitator is his full time job.  In 2009, LIUNA (Laborers’ International Union of North America) paid him $126,518 to do just that.

There is no doubt that Barack Obama has heard of Randy Parraz and his role in the defeat of Arizona Senate President Russell Pearce, just like he’s heard of SB1070 and the lawsuits that the Department of Justice has filed against Arizona.  If there is any doubt about who toppled Senator Pearce and greased the wheels for a Jerry Lewis victory, you should see this:  The Lou Show: Randy Parraz with the Decapitated Head of “the monster” Russell Pearce.

Chad Snow, attorney, is well known for pretending to be a Republican, yet consistently standing with Randy Parraz.  In fact Chad, the "Republican," donated $1500 to Progressive Democrat Randy Parraz when Parraz ran for U.S. Senator in 2010.  Chad’s wife Rachel donated $2400.   So, the "Republican" forked over $3900 to beat Republican John McCain.   He also teams up with Progressive Democrat Leftists on a regular basis.

Snow has openly targeted other Republicans for destruction, including Senators Andy Biggs and Antenori.  As stated in the 11/20/2011 issue of the Arizona Capitol Times, "Snow said that although Arpaio is one possible target for the group, so are the lawmakers at the Capitol who have vocally allied themselves with Pearce and his brand of politics. ‘(Sens.) Andy Biggs and Frank Antenori — the way they’ve been talking, it’s almost like they’re begging to — it looks like they didn’t get the message (from the Nov. 8 recall election),’ Snow said."  Arizona Capitol Times, 11/20/2011.  Pearce Recall Group Plans Future Activism.

He is a workers compensation attorney with Snow & Carpio, PLC.   His website states:  “If you were injured at your job in Arizona, your immigration status is not a factor. You are as deserving of workers’ compensation benefits as a worker who is a U.S. citizen…..”

We haven’t spotted him at any Republican fund-raisers.

Both Parraz and Snow started Citizens for a Better Arizona, which pumped $141,000 into Jerry Lewis’s election.  They recently formed Moving Mesa Forward to help Bob Worsley get elected.  Everybody except Worsley and his supporters know that Parraz and Snow could care less about him.  They’re after Pearce.  He’s Step #1 in breaking the Republican hold on Arizona.

I wouldn’t be surprised if Raquel Teran, who also helped get Lewis elected, jumps in to help Parraz and Snow get Worsley across the finish line. See Beginner’s Guide to the Leftists (Parraz, Teran, and Promise AZ en accion aka PAZ).   Teran headed Promise Arizona en accion.  Assisted with $30,000 in outside Leftist money (UNITE HERE and Campaign for Community Change), she hired several charming, jobless young people to go door to door to "educate" the neighborhood about Jerry Lewis’s positive attributes, and Russell Pearce’s negative ones.  See also How the Left Was Won.

There’s even more out of state Leftist dollars that might be available to Worsley, just like it was to Lewis:  Campaign Money Watch spent nearly $53,000 to beat Pearce.  Campaign Money Watch is funded by MoveOn.org, and several major unions (CWA, SEIU, UFCW), plus other pro-abortion Leftist groups.  These role models of the "new civil tone" published some nasty Russell Pearce hit mailers.

Wouldn’t you think that otherwise intelligent people like Bob Worsley and Jerry Lewis would ask:  Why are these pro-Obama, pro-big government, pro-ObamaCare, pro-abortion Leftists helping me?   Could it be my gosh darn winning smile?  Maybe it’s my “civil tone of respect and decency."

Leftists like Parraz, Snow, and Teran, and many others, are street smart, well trained political pros.  They slime-ball their way into the hearts, minds, and egoes of naïve Republicans, convincing them that their strongest conservative leaders: Pearce, Arpaio, Biggs, Antenori, Kavanaugh, and others, are racist bigots who need their “mean tone” adjusted.

It didn’t take long for Raquel Teran to convert Jerry Lewis.  Here he is, surrounded by Raquel Teran and her Promise Arizona en accion acolytes.   (Taken in January 2012.) 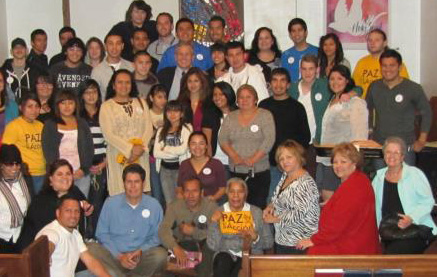 I’m not sure what more this Cassandra can do to open their eyes.  Once the strong conservatives are out of the way, you won’t be able to tell the difference between a Republican Socialist and a Democrat Socialist in the state of Arizona.   We will look just like California, Randy Parraz’s home state.

"The hardest thing to explain is the glaringly evident which everybody had decided not to see."  Ayn Rand.