If you vote YES to the Gilbert Public Schools override, because you believe the following Pro Argument statement made by Mr. Justin Plumb, you will be casting your vote based on seriously deceptive information.

“…with only one 1.6% raise and no movement on the salary schedule for experience in seven years it’s no wonder many teachers are leaving Gilbert and moving to other districts.“

Click HERE to read Mr. Plumb’s misleading statement, which appears on page 26 in the Publicity Pamphlet.

The Truth is that teachers have had 5 increases in pay in just the last 4 years, as follows:

Not only did Mr. Plumb rely on faulty gossip instead of research, Dr. Don Covey, the Maricopa County Superintendent of Schools, also failed miserably at doing the job he was elected to do.  According to ARS15-481(B)(9).  “The county school superintendent shall review all factual statements contained in the written arguments and correct any inaccurate statements of fact.”

Dr. Covey failed not once, but twice.  On 8/16/2015, long before the pamphlets were to be printed, Dr. Covey’s office was notified, in writing, of Mr. Plumb’s misleading assertion.  Further, Dr. Covey’s office was provided with corrected information by former GPS board member Ms. Staci Burk.  Dr. Covey willfully ignored it and took no action. Click HERE for Declaration under oath made by Ms. Burk.

On 9/17, Mr. H. Steven Johnson, discovering that Dr. Covey still hadn’t fulfilled his responsibility, filed a formal complaint, demanding that Dr. Covey correct the inaccurate, misleading statement, so the public would have the truth before voting.    Click HERE to see Plaintiff’s Application to Show Cause.

I stand incredulous at what happened next.  Maricopa County Superior Court Judge David B. Gass nonsensically failed at Common Sense 101.  He conjured Mr. Plumb’s misleading statement into hypertechnical truth, and turned a blind eye to Dr. Covey’s willful irresponsibility.  (As an aside, from 2001-2007, Mr. Gass was legal counsel to the Democratic Caucus of the Arizona House of Representatives. His retention as a judge is to be considered in November 2016.)

Judge Gass chastised Mr. Johnson for “acting too late.”  Even though the election of November 3 was still more than 40 days away, Judge Gass stated (I’m not kidding):

“The election has begun. The ballots under the Uniformed and Overseas Citizens Absentee Voting Act (UOCAVA) were distributed as required by statute on September 17, 2015, the same day that Mr. Johnson filed. A total of forty-six UOCAVA voters have been sent their ballots, forty by email and six by regular United States Postal Service. With the UOCAVA ballot, the voter was directed to an online version of the Pamphlet."   Click HERE to read Court Minutes.

On September 26, 2015, Mr. Johnson filed an appeal to the Superior Court of Arizona.  Among his many statements, he cited a previous court case “Sherman v the City of Tempe, 2002.  In this case, the judge asserted:   "although votes may be cast prior to election day, measures are not conclusively voted upon until the actual day of election." Sherman v. City of Tempe, 2002 AZ 54 (AZ, 2002).  Click HERE to read Appeal.

As an aside, Dr. Don Covey is up for reelection by Maricopa County voters in November 2016.

Judge David B. Gass, former Counsel for Democratic caucus, Arizona House of Representatives, from 2001-2007, is also up for retention by the voters in November 2016.  Also see David Gass’s Judicial Biography.

Why Should you Trust GPS Officials?

Speaking of misleading information, are you under the "impression" that Dr. Kishimoto and majority Board members Humpherys, Tram, and Santa Cruz consider teacher salaries to be a priority if the override passes?  If so, why isn’t it part of their 2015-2016 Board Goals? 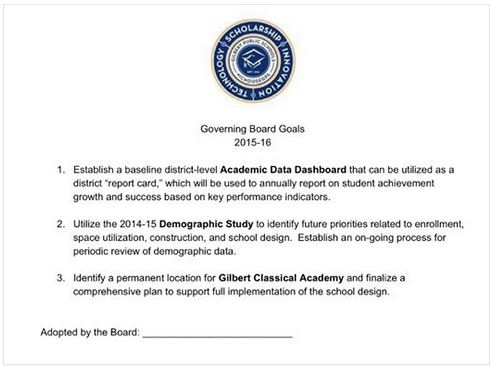 And so, based on deceptive information, faulty logic, and multiple failures by elected officials, “Let the voting begin”!