As we learned recently, federal Judge William Orrick III has extended his restraining order against the Center for Medical Progress, ruling against release of videos that could be prima facie evidence of born alive infants and subsequent sale of their body parts.  Orrick is the federal judge who Arizona Senator Jeff Flake voted for twice.

"Extremist" is the adjective most used by the newspaper, television, and entertainment industry, education establishment, and Democrats to describe conservatives and Christians.  But what about the actions and obvious beliefs of the person closest to Judge William Orrick III:  his wife, Caroline Farrow Orrick?   Does she represent "mainstream" America?  If so, what does that say about Americans?  Can we ever again call ourselves "civilized"?

According to Mollie Hemingway, Senior Editor of The Federalist:

Orrick’s wife, Caroline “Linie” Farrow Orrick,  partners with her husband in their political decisions and she is his co-bundler

She’s also a public supporter of extreme abortion policies.  Her YouTube user page shows that the first video she ever “liked” was from an extreme pro-abortion group called the Center for Reproductive Justice (sic) . The slick, celebrity-laden video called for people to sign a “bill of rights” that asserts a right to abortion on demand through all nine months of pregnancy, a position shared by very few Americans. It further calls for taxpayer funding of contraception, abortifacients and abortion. And, finally, it says that all health care plans should be required under penalty of law to cover abortion, abortifacients, and other anti-reproductive services — even if they have religious objections such as those held by the Little Sisters of the Poor.

One of the more alarming “likes” on Mrs. Orrick’s Facebook page  is of the Sisters of Perpetual Indulgence, which are basically a campy gay version of Westboro Baptists. The group has been around San Francisco for 35 years, beginning when a few men obtained nun habits under false pretense. Members adopt profane names and blaspheme Jesus Christ and the Christian church.  Some twenty years ago, the group began an Easter Sunday pub crawl parodying the stations of the cross, and sending up the Virgin Mary, Mary Magdalene and other saints revered by Christians. They end the event by mocking the Eucharist with vanilla wafers and Jägermeister. They also hold a “Hunky Jesus” contest where men compete to be the sexiest Jesus look-alike. The group also supports abortion and has partnered with Planned Parenthood.

Christians, including Catholics, and Jesus Christ are easy targets for cowardly bullies to mock.  Unlike terrorist-dominated Muslims, Christians won’t throw the "sisters" off a building for being gay .   The spineless gay "sisters" would never mock Allah or Muhammed, would they.   For the crime of publishing cartoons mocking Muhammed, Muslim terrorists gunned down 12 editors and cartoonists  employed by the Charlie Hebdo newspaper, screaming, ““Allahu akbar!”  And in a later gunfight with police they screamed, "We have avenged the Prophet Muhammad. We have killed Charlie Hebdo!” 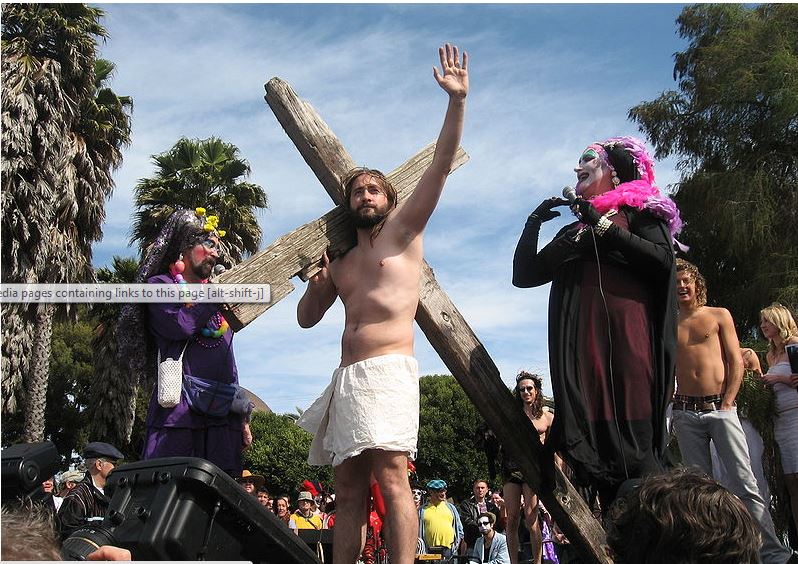 Killed for ‘being gay’: ISIS savages blindfolded man and threw him off tower block – then stoned him to death when he SURVIVED the fall