Some of you know April Riggins personally by her long list of accomplishments in Arizona.  You’ve been privileged to work side by side with her many times.  Others know her as the person running for First Vice Chairman of the Maricopa County Republican Committee on A. J. LaFaro’s grassroots conservative slate.  Her credentials are impeccable.  Some of them are discussed in this article, a few others appear listed below.

Our Republican Party needs a strong dose of conservative leadership, not just in Washington, DC, but also at the County level, and April’s past performance is an excellent indicator of her future behavior.  The fact that she was chosen by A. J. LaFaro to be his First Vice Chairman says a lot about her commitment to conservative principles.

April’s active work within the Republican Party leadership began when she became a Precinct Committeeman in 1999.  Over the years, she has volunteered as a poll worker, poll watcher, and ballot auditor.  She has been elected to serve in many responsible leadership positions, including State Committeeman and Member-At-Large from CD6.  She is the Past Chairman of LD7, and was the First Vice Chairman and Treasurer prior to that. She is a 2010 graduate of the Dodie Londen Excellence in Public Service Series

Very recently, April, along with Jose Borrajero (candidate for Second Vice Chairman), were among a handful of hard-working leaders voted by their fellow Republicans to represent Arizona as delegates to the 2012 Republican National Convention.  It’s an honor that comes from working many areas over a long period of time, giving assistance whenever and wherever possible.

As an alternate, April was especially proud that her son, Ryan, could attend the convention in Tampa as her guest.  This gave her much insight into the Republican “youth” opinion and viewpoint, which she found fascinating and will always treasure.

Another exciting moment for April was being caught on video during Clint Eastwood’s "Barack Obama: Empty Chair" speech.

There is much more to this dynamic woman, whose favorite quote is from Thomas Jefferson: “My reading of history convinces me that most bad government results from too much government.”

Some people meet challenges.  April Riggins runs after them.  She has met and made friends with many Arizonans through the process.

April is a champion, not only in Republican leadership helping to build the party and standing up for her country, but also as a professional business woman.  Starting her career in the “fabric room” of a large Phoenix furniture company back in 1978, April is now the owner of Fifth Avenue Designs, Inc., as well as the Arizona Design Consultant for Construction Solution, Master Distributor of the all natural American Clay in the Southwest.  She works with architects, builders, and interior designers creating beauty that has appeared in many residential and commercial buildings, including the Ritz-Carlton in Dove Valley, Tucson, The Enchantment Resort in Sedona, and Silverleaf residential development, to name a few.

She has also won awards for related designs, including Best of Show as well as the Museum Award – Phoenix Art Museum Festival of Trees.   She was Chairman of the Maricopa Arts Steering Commission.

An accomplished horsewoman, April Riggins is a champion many times over.  She is a World and National Champion in Appaloosa and Buckskin Horseshows, and has been named Woman of the Year by the Arizona Appaloosa Association.  Here is a photo of her horse, “Cowboys Customaid,” taken in 2009 at Lucky Penny Ranch in Cave Creek, AZ. She and her trainer, Steve Cruse, have won national, world, and international titles together. 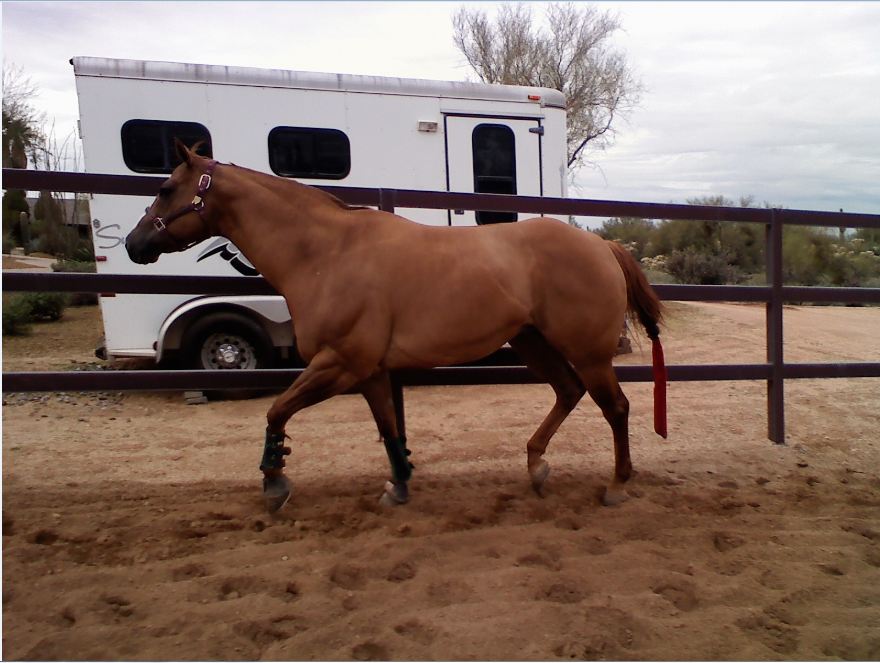 Her interests are varied, and no matter what she chooses to do, she leads.  April was twice President of the Encanto Women’s Golf Association, and Executive Secretary for the Western State Corvette Council serving Arizona, California, Texas, Utah, Colorado, New Mexico, Nevada, and Washington.

She has been a substitute teacher for St. Thomas the Apostle Elementary School, and for Our Lady of Joy Kindergarten.

April has many fond memories of growing up in Phoenix.  She watched sheep herders cross Scottsdale Road with their sheep, and remembers when there were palm trees in the center median of Central Avenue.  A graduate of Central High School, among the top 3% of her class, she recalls attending the prom at the Westward Ho Hotel (built in 1928).  She once rode her horse through Wallace and Ladmo’s Drive thru for an icee.

Her grandfather was a World War I veteran and staunch Republican who deeply loved his country.  Sometime after his death, April was straightening the drawer of an old chest her mother had left to her.  She noticed an envelope in the bottom of it.  As she opened the large envelope her eyes set upon a letter written to her grandfather saying,  ”I know I speak for all Republicans when I express my deep appreciation for the important part you played in the campaign…” and it went on. This special letter was from Dwight D. Eisenhower, dated 1952.  It was a proud moment that has inspired her own commitment to her country.

In spite of her many awards, one of her best memories was when, as a teenager, she wanted to enter the Pony of America’s show held at the Western Saddle Club in Phoenix.

April didn’t own a pony.  Her horse was a wonderful non registered  brown gelding named Troop.  She asked Walter Martin, the gentleman who owned the ranch where she boarded Troop, if she could “borrow” one of the wild, untrained ponies he had rescued from the Verde river area.  He was going to train some of them for his grandchildren to ride.  April describes Walter Martin as "a true Arizona Cowboy who was a kind and respected horseman."   He said yes to April, so she chose a black and white pony and named him “Domino.”  She and Domino trained for weeks preparing for the Western Pleasure class.  She and Walter clipped and bathed him, painted his hooves (required for shows), and borrowed a show saddle for the event.  April and Domino went in for their one class together and came out with a third place ribbon among a class filled with registered, professionally trained and bred ponies.

Today, April is at the top of her field as an accomplished Interior Designer.  But she still remembers a rare opportunity when she was just beginning her career after graduating from college.  Back in 1978, she was working for a large fine furniture company named Barrows Fine Furniture and had been promoted out of the fabric room to “Designers Assistant.”  The designer she worked for was given the project of a Frank Lloyd Wright Foundation designed home in the Arizona Biltmore.  On this particular project April was asked to make a few choices.  The designer approved them, and they were implemented into the interior of the home.  "To this day, it means so much that I was was able to contribute to a part of the Frank Lloyd Wright Foundation legacy," April told me.

Here is April with Dede at the 30th anniversary held on Dec. 15. 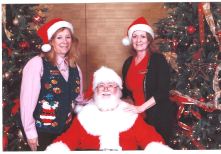 “Volunteerism to me is a  charitable gift  we give and share with others.”  April Riggins

April is not alone in her core belief shared by many Americans who feel privileged to help others.  One charity that is dear to April’s heart is the organization that raises money to fight Cystic Fibrosis.  It’s a disease that affects the lungs of children and is fatal.  She recalls a young man named Scott Gaston, who was the poster child for a car club to which she belonged.   Members of the club raised money to help him with his medical care.  He was very bright and kind.

It’s a small world in Arizona, and later in her life their paths crossed again.  April had started taking lessons from an expert trainer, Steve Cruse, to improve and compete in horse competitions.  "One of the special people who worked for Steve was a young man named Scott Gaston, the same bright, kind youth I had met so long ago through the car club" she recalls.  "He rode horses with an oxygen tank in a backpack as the disease progressed."  April and her friends from the “barn” would visit him in Phoenix Children’s Hospital as he worked hard to stay with them.  He passed at the age of 27 which was considered old for a Cystic Fibrosis child.  All who knew him, including April, admired him and loved his spirit.

The following is a "short list" of April Riggins’ leadership positions in the Republican Party, as well as in other venues.

Arizona Design Consultant for Construction Solutions, the Master Distributor of American Clay in the Southwest.