On the morning of Dec. 7, 1941, an attack planned by Isoroku Yamamoto, Japanese Marshal Admiral and commander-in-chief of the Combined Fleet during World War II, was carried out to demobilize the US Navy.

You probably have family members in their 80s and older who remember exactly where they were and what they were doing when they got the news:  "We’ve just been attacked!"  Some memories fade quickly.  But not this one.

My mother remembers.   She and my father had been married for less than a year.  He was a sergeant in the Army Air Corp stationed at Chanute Field in Rantoul, Illinois.  "It was a Sunday," she told me. They were visiting his parents on their farm in down state Illinois that day.   My father and grand-father were driving around the countryside looking at the land, which is what farmers often did and probably still do, after church on a Sunday.  They heard the news on the car radio.  "It was a ’40 Ford," Mom said.  They returned immediately to tell my mother and grand-mother.  "It was a total shock," remembers my mother.  "It was scary."  She and my dad returned quickly to their home.  "From that moment on, he had to be in uniform until the end of the war."

The next spring, he shipped out to Seymour Johnson Air Field in North Carolina. Mom remembers that the base had been quickly constructed, using trees from the forest where the base was located. It was still being constructed when they arrived.  She recalls that it was a training base for mechanics and pilots.  My mother remembers that, throughout the war, she rarely saw pictures or got much word of what was happening.  "We didn’t have television."  Mostly, she saw newsreels in the local theater.  My father was eventually sent to India.  "It took thirty days for him to get there.  The ship had to zigzag across the ocean, to stay clear of submarines.  He didn’t know where he was going until he got there."

On December 7, 1941, the Japanese killed 2402 Americans, destroyed 188 planes and damaged 159.  They sunk 4 battleships and damaged another 4.  "The Pearl Harbor attack spurred America into World War II, leading ultimately to Allied victory over the Japanese in the East and Nazis and other Axis powers in the West.  And the country promised never to forget this day of infamy."  See Unforgettable photos from the Pearl Harbor Attack, 72 years ago today.

One of the battleships that was sunk was the USS Arizona.  See photos below. 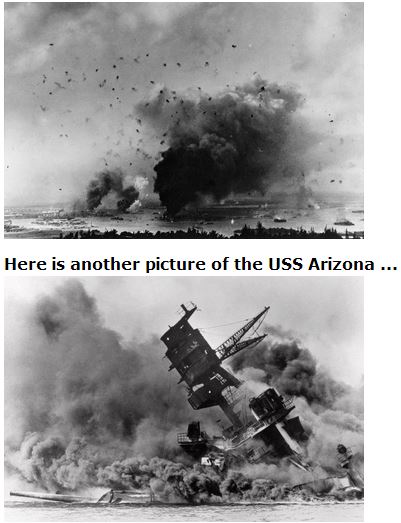 Many of the men who survived the bombing of the USS Arizona have been interred on the battleship, upon their death.  Glenn Lane was blown off the burning deck.  In September 2012, he was interred at the Arizona with full military honors, including a 21-gun salute, the presentation of the flag and the playing of taps. The final goodbye came as his daughter Trish Anderson handed the silver urn with Lane’s ashes to Navy divers; one of them held up the urn as they swam away from the memorial’s dock, and then they went below to return Lane to his ship.

See One of the last USS Arizona Survivors returns to ship for the last time.