by Jennifer Reynolds, publisher of Arizonans Against Common Core.

A Rebrand of Common Core is coming unless we stop it through our combined voices speaking against the proposed 2016 English Language Arts (ELA) and Mathematics Standards. Very little has changed with these 2016 Standards and we will still have Common Core! 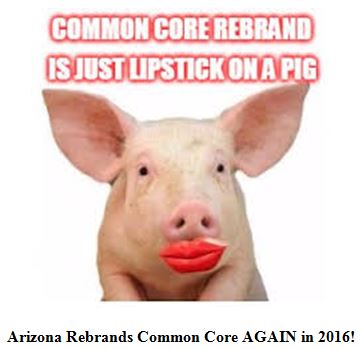 As suspected the Arizona Department of Education (ADE) and State Board of Education (SBE) are trying to "Rebrand Common Core" with their latest 2016 draft of the English Language Arts (ELA) and Mathematics Standards. The ADE Working Groups were tasked to review and incorporate our public comments which have been ignored. Our pleas to take out the "prescriptive examples and developmentally inappropriate standards for ELA and Mathematics" have been brushed aside, and the ADE Working Groups proceeded with the 2nd rewrite with very little changes to the Arizona’s College and Career Ready Standards (aka Common Core). If you put lipstick on the Common Core pig, it is still a pig!

Here are the reviews that our combined groups- Arizonans Against Common Core, Opt Out AZ and "Mommy Lobby AZ"- submitted to the SBE K-12 Standards website on October 3 for the draft 2016 ELA and Mathematics Standards. Parents voices were NOT heard, our comments were NOT incorporated, and here we have another "Rebrand of Common Core" if we let this happen just like we saw in 2013 with the renaming of Common Core to "Arizona’s College and Career Ready Standards."

WE NEED YOUR VOICES at the Arizona Standards Development Committee Meeting on December 14:

December 14, 9am at the ADE building (1535 W. Jefferson, Phoenix, AZ 85007). If you have commented on the draft 2016 ELA and Math standards AND/OR if you are fed up with what is happening in your child’s classroom with the Common Core standards and testing please show up and let your voices be heard. Nothing will change in Arizona if the 2016 ELA and Mathematics standards are approved by the Arizona Standards Development Committee and the State Board of Education which will happen with a subsequent vote. Common Core will be here to stay if we don’t rise up and stop it!

CAN’T ATTEND THE MEETING? Who to contact about the Rebrand of Common Core?

Governor Ducey initiated the "Arizona Standards Development Committee" to "review and replace the Common Core Standards"(http://education.azgovernor.gov/edu/arizonas-academic-standards) on March 23, 2015 and these are his direct words, "As you know, I am against Common Core and spoke out against it on the campaign trail. That has not changed. Like you, I have high expectations and am for high standards for our students. We cannot excel without them. So, Arizonas standards must reflect the goals, expectations, and input of Arizonas parents and teachers. I encourage every Arizonan to get engaged in this process of creating new standards and assist the State Board of Education in the work ahead. Attend public meetings. Make calls. Write letters. Use social media. Make your voice heard. If like me, you are opposed to the federal governments increased involvement in our K-12 system, this is the quickest, best and most responsible way to fix it. If Arizona is going to be the best place in the nation to educate a child, then Arizonans must lead the way." (http://azgovernor.gov/governor/news/im-arizona-standards) "

Executive Director at the State Board of Education (SBE)- Karol Schmidt: Karol.Schmidt@azsbe.az.gov or 602-542-5057

Let our voices be heard that "WE WILL NOT ACCEPT A REBRAND OF COMMON CORE on our watch!"

For our precious children,

If you are just now waking up to the WAR that has been going on all around you for the last 5 years:

Has YOUR Legislator been Endorsed by Pro Common Core, Anti-Parent "Stand for Children"?

Is Expect More Arizona in it for the Money?

Developmentally Inappropriate Standards for K-3 Should be Removed

Joint Statement of Early Childhood Health and Education Professionals on the Common Core Standards Initiative Issued by the Alliance for Childhood March 2, 2010.  NOTE:  This was signed by over 420 child development professionals and presented to the National Governors Association and the Council of Chief State School Officers.  It was ignored.  The Standards were released in June 2010.

Reading Instruction in Kindergarten: Little to Gain and Much to Lose.  Alliance for Childhood

A Tough Critique of Common Core on Early Childhood Education.

The State of State Standards— and the Common Core —in 2010 by Thomas B. Fordham Institute

Math test scores down for the first time in 25 years

Controlling Education From the Top: Why Common Core Is Bad for America

When Will We Ever Learn: Dissecting The Common Core State Standards with Dr. Louisa Moats

A Discussion of the Issues with the Common Core Mathematics Standards

Arizona K-12 School Finance Statistics: Why does Arizona Rank #48 in Per Pupil Spending?

More Education for our Dollars, Not More Dollars for Education

E.P.I.C. versus the U.S. Department of Education

Not With My Child, You Won’t: Psychological Damages of Common Core Analyzed by Joan Landes

Beautiful Letter from an Arizona Teacher to Her Students

Opt Out Movement should Flourish During Testing Season

Dear Senators: "About your decision to disregard parental authority….."

These are the Senators Who Sneer at Parental Authority

Letter of Assertion to Opt Out and Refuse the AZMerit Test.

Why is the U.S. Department of Education Weakening FERPA?

Personally Identifiable Information Requests from the Arizona Department of Education.

A Day in the Life of a Data Mined Kid

Teacher Evaluation Should Not Rest on Student Test Scores (Revised 2016)

Letter of Assertion to Opt Out and Refuse the AZMerit Test

Why Parents are Opting Their Children out of High Stakes Testing

Ten Reasons To Opt Out of Common Core/SAGE Testing

Common Core’s Validation: A Weak Foundation for a Crooked House

The History of Common Core Standards

Mercedes Schneider:  Who are the 24 People Who Wrote the Common Core Standards?