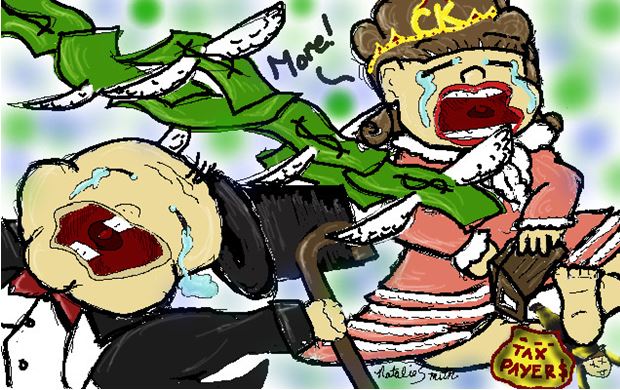 The dust has yet to settle from the November 2016 election but cries for more money have already started in my school district.  Superintendent Christina Kishimoto of the Gilbert Public Schools District (GPS) issued a report on November 18 to the governing board providing her opinion of the historical funding of Capital (Building construction; purchase of land and equipment) and Maintenance & Operations (Employee salaries; purchases of supplies, materials and contractual services) allocations for fiscal years 2008 to 2017.  In her report, Superintendent Kishimoto claims her desire is to provide a perspective on state versus local funds in these two categories in order to “Help you in your discussion with legislators as the state engages in its decisions about education funding.”   She then concludes that GPS has experienced a cumulative loss of $70 million dollars since 2008 due to the state not “fully” funding the capital formula but does admit funding to Maintenance and Operations (M&O) has gradually increased.  Superintendent Kishimoto’s report intentionally ignored realities, thus providing the premise of a dishonest argument about funding for GPS.

Reality #1:  Education funding from the state of Arizona peaked in fiscal year 2008 with school districts experiencing gradual increases leading up to the peak.  For fiscal years 2006 to 2008, GPS enjoyed an increase of 18% or an additional $690 per student!

Reality#3: According to Arizona Indicators, Capital funding “…does not benefit current students.  Maintenance and Operations funding is a more meaningful measure of education funding.“  Arizona Indicators is community partnership started at ASU out of a desire to provide a central resource of data for policy makers.

Reality#4: United States median household income when adjusted for inflation is 40% lower than before the Great Recession, and, in the state of Arizona, the recovery is slow.  According to the Children’s Action Alliance, in June of 2015 Arizona had only recovered about 78% of lost jobs admitting to severe impacts on state revenue that is projected to return to pre-recession levels after fiscal year 2018.

Reality#5: Obamacare premium price increases for 2017 will hit the state of Arizona the hardest with an average 62% increase and rates soaring to 145% in the Phoenix area according to the Kaiser Foundation.

When ignored realities are incorporated, I believe most people would draw a different conclusion than Superintendent Kishimoto.  She wants the citizens of Arizona to pay more in tax dollars in an economy with fewer jobs, less income and less discretionary money to spend while ignoring the hundreds of millions of additional local tax dollars generously agreed to by the voters.   This is a hard pill to swallow considering Superintendent Kishimoto earns more than a quarter of million dollars annually, and, under her leadership, more jobs have been added to the central administration office shifting dollars from the classroom (teachers and supplies) despite declining student enrollment.

I agree that discussions should be engaged with our legislators about education funding, but full disclosure and acknowledgment of the facts is a must.  I never had a conversation with a legislator in which it was believed funding to education was sufficient but rather, how is the money allocated prioritized by the governing board and superintendent?  Arizona state legislators and the governor have made education funding a priority in challenging economic times, but, ultimately, the governing board and superintendent must be held accountable for the spending of education dollars.  We as a state cannot advance in education funding discussions if parties involved come to the table with dishonest information motivated by political bias pointing the finger of fault at others for misuse of our hard earned tax dollars.