Last week, I sent the following letter to the Phoenix Mayor and Council members. At the end of the letter, you can see the "Resolution" that was approved unanimously by the Phoenix Human Relations Commission. Two members of the Commission include Lilia Alvarez and Dan Martinez. Lilia Alvarez is with Citizens for a Better Arizona, founded by Randy Parraz. Dan Martinez co-founded East Valley Patriots for American Values, along with Randy Parraz.

Earlier this week, your Human Relations Committee unanimously passed the attached Resolution. On January 31, 2012, I attended a Maricopa County Board of Supervisors meeting and learned from Chief Deputy Sheriff Jerry Sheridan that claims in this Resolution relating to uninvestigated sex crimes are not true! These “over 400 uninvestigated cases” relate to a discovery made by MCSO dating back to October of 2007. Sheriff Arpaio immediately ordered that the 432 cases be reopened, and he dedicated 27 sheriff’s detectives to complete them. All but 4 were resolved in 2008. The audit showed that 417 of those cases did not meet the criteria necessary to warrant further investigation. The other 15 were investigated and resolved in 2008, except for the 4. Of those, 3 suspects have been identified and interviewed, and MCSO is awaiting DNA analysis. The last case has been completed and submitted to the County Attorney for prosecution.

Chief Sheridan went on to say that he has given this information to the media twice, on two separate occasions. He restated the number “15” several times—the actual number that warranted further investigation, not 432–and expressed frustration that misinformation continues to be repeated.

Facts such as these are easily obtainable by you and the members of the Human Relations Commission. I’m sure that Chief Sheridan would be happy to provide you with his report, if you request it.

The attached Resolution also makes other very serious allegations against Sheriff Joe Arpaio. Some of those allegations are in litigation and unproven.

The attached Resolution also makes additional very serious allegations, but with no evidence to back them up. In fact, this evidence has been requested by both the County Attorney, as he stated in yesterday’s meeting, and Sheriff Arpaio’s attorney. Yet, the Department of Justice, which is crawling with attorneys who understand the meaning of the word “evidence,” has failed to provide it.

These are all very, very serious disproven and unproven allegations that your entire Human Relations Commission has asserted as fact against the Maricopa County Sheriff. And it is on the basis of accusations alone that these commission members are demanding the resignation of Sheriff Arpaio. I recall that the Soviets were famous for their “show trials” that we in the United States refer to as “kangaroo” courts. I doubt seriously that this is what the Phoenix Mayor and Council Members condone, and I shudder to think that this is what America has become.

In our country, men and women have died to protect our freedoms, including a justice system that respects and practices “due process.”

Also, it appears that this Commission used a template that was previously used by a Political Action Committee that was formed solely for the purpose of recalling Senator Russell Pearce: Citizens for a Better Arizona. The blatant act of partisan politics behind this action is appalling.

I’m not sure what criteria you use to approve your appointments to the Human Relations Commission, but it is disturbing that an entire Commission, all of whom have been appointed by the Phoenix Council, would take such a strong stand based on spurious claims.

They have done far worse than simply embarrass you. 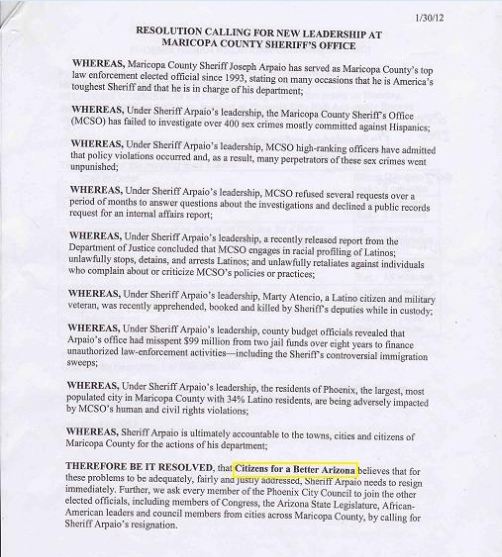