Please add the Arizona Daily Independent to your list of newspapers to replace the local Leftist rags (Arizona Republic, the Tribune, Payson Roundup, et al).  Their motto is:  "There are NO sacred cows."

Dexter Duggan has written a thorough account of the February 4 Sex-Ed meeting in Tempe.  Why on earth these government schools are enamored with teaching sexual education to minors makes little sense.  The incidences of STDs, teen pregnancies, and sexual experiences at earlier and earlier ages is the result.

Bob LaCroix said that half of all pregnancies are considered unintended, and nearly half of births are outside marriage. Given these facts, “Whatever Planned Parenthood’s stated mission is, it is not working,” LaCroix said.

This meeting was heavily attended by members of the community. 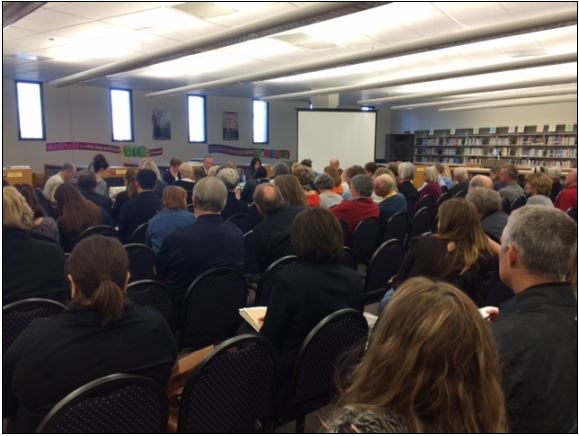 As stated by Mr. Duggan:

More than 70 people were in the audience for the 4:30 p.m. meeting at Desert Vista High School of the sex-education curriculum committee tasked to advise the TUHSD governing board on adopting a program. Seventeen members of the public had time to speak before the committee.

A recurring point among audience speakers was opposition to sex education being taught at school. This should be the role of parents, they said. Planned Parenthood itself frequently was criticized.

Michael Norton, a senior counsel with Alliance Defending Freedom, was present at the meeting.  An ADF letter issued to all Arizona school districts:

… explains that giving Planned Parenthood access to students very likely violates a state law that requires preference to be given to childbirth and adoption, not abortion.”

Another meeting is scheduled for Monday, March 3.

As an aside, Planned Parenthood has no problem advising that multiple sex partners at the same time is perfectly normal. They follow the Leftist chant that there is no such thing as good or bad morals.  Morality is a "personal" decision. Here’s a quote from the Planned Parenthood "advice" column:

"The Greatest Destroyer of Peace is Abortion."  Mother Teresa

Transcript of Speech by Mother Teresa of Calcutta to the National Prayer Breakfast, Washington, DC, February 3, 1994