A recent article in WORLD magazine titled "The New Underground Railroad" by Marvin Olasky describes how Christians are willing to take huge risks in order to help desperate North Koreans flee from their country.  North Korean border guards do not hesitate to shoot people in the back as they’re crossing the border.

A communist regime run by totalitarian dictator Kim Jong Un, North Korea keeps its citizens in the dark in more ways than one.  From a satellite view at night, it is virtually completely black, devoid of electricity.   The regime also seals its citizens from any knowledge outside its well patrolled borders.  Merely being caught talking on a cell phone is punishable by death.

Both the Chinese and North Koreans are racists, rejecting the "half-and-half" children of one Chinese and one North Korean parent.  The Chinese reject the children as "impure," and in North Korea, a woman who is pregnant by a Chinese male is subjected to forced abortion.

Here’s an interesting piece of information about North Korea’s newest Tyrant, Kim Jong Un, the son of Kim Jong Il.  The son received much private education, including being schooled in Switzerland.  Take a look at the photos below.  In the group shot, you see Kim Jong Un, a teenage kid (in dead center, back row) among his ordinary classmates; in the head shot top photo, he looks no different than any American high school kid.  It’s that last photo of him that reveals what several murders under his belt have done to any shred of "normalcy." 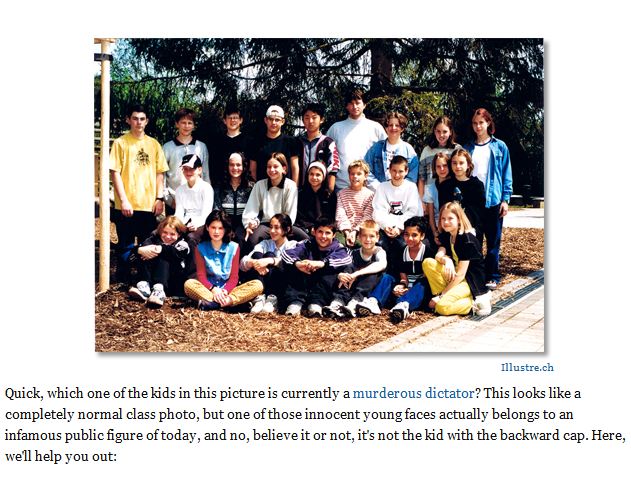