The following article was written by Donna Daly, a resident of Gila County.  If you live in Gila, Navajo, Graham, or Coconino county, or if you have a cabin in any of these areas, or if you have a business in these counties, you need to read every sentence of this article.  The deadline for comments to the U.S. Fish & Game is 10/28/2013.  No hearings have been scheduled in areas where these wolves are to be released!   All of the animal rights activists from across America know about it.  Not us!   These members of the Sierra Club and Defenders of Wildlife don’t even live in Arizona where these animals will  be releasesd.  I live within 30 feet of the Tonto National Forest.  I know what coyotes can do.  I love all wild animals.  I love wolves.  It is criminal to release them in these areas, where they will be shot and killed by people protecting their livelihood.  If the animal rights people want to preserve them, release them in remote areas, not near people, and especially not near children!  Don’t release them where they will kill pets and livestock and ruin the economy of the towns that thrive on the tourist trade and hunters.

This is what Pelosi, Obama, Reid, and all the Democrats want!  They want to grind America into the ground.

When researching the ranching history of this area for a museum exhibit, I came across information about the difficulties ranchers faced in earlier years with cattle losses due to mountain lions and wolves.  Recently I learned that Steve Smith, a Gila County rancher for 35 years, was speaking to the Payson TEA Party on the Mexican gray wolf, so I attended his talk expecting to gain an updated perspective of predator issues for Arizona ranchers.  I quickly realized that he was talking about a much bigger issue!

Ranchers near the Arizona/New Mexico border are reporting livestock losses due to the Mexican gray wolf.  These same wolves may be coming to Rim Country if U. S. Fish and Wildlife proceeds with a plan to expand their current habitat.  This raises some serious questions.  What would the impact be for Rim Country residents if this happens?  Most of us moved here knowing that we would share this beautiful country with elk, deer, javelinas, and coyotes…but we didn’t expect wolves?   Would we have moved here if we had known that the federal government would bring wolves to this area?  Many hunters in Rim Country count on elk to put some extra food on the table. It has been reported that a wolf will kill one large mammal per week. How long will it be before hunting permits are affected?  What about the devastation to the economy of towns whose shops and restaurants are visited by these hunters?  Such questions contributed to a rather sleepless night, and I spent the next day searching the web for information to verify or contradict what I had heard at the meeting.

I have a soft spot for all wildlife, but many of the first-hand reports of people living near the current wolf range are a cause for concern.   The information below is a summary of what was shared by Steve Smith and other ranchers from the Show Low area, plus information I obtained from sources on the web.  The links are provided to give you easy access to the cited articles.

Wolves were once prevalent in Arizona but were hunted to extinction beginning in 1893.  From 1978 – 1980 a captive breeding program was carried out whereby captured wild wolves from Mexico were placed in a captive breeding program to be later reintroduced in the southwest.  The Wolf Recovery Program was formed in 1979 with the goal of establishing a self-sustaining population of at least 100 Mexican grey wolves. See The Mexican Gray Wolf.

The Blue Range Wolf Recovery Area was established in eastern Arizona and western New Mexico, an area of 6800 square miles that includes the Apache National Forest and the Gila National Forest.

The pink area represents the primary recovery zone where the captive breeding program was conducted.  The peach area indicates the secondary recovery zone into which captive bred wolves have been released.  The yellow zone is the White Mountain Apache Reservation, which has also received wolves as part of the reintroduction project. The light blue zone stretching from the western Arizona border to the eastern New Mexico border is the proposed expanded wolf habitat. See Field Trip Earth: Recovery Area. 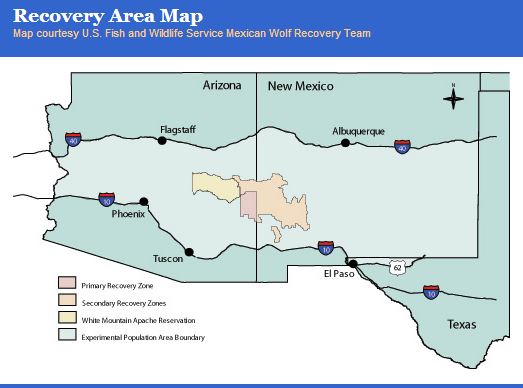 Wolves to be Expanded from I-40 all the way to I-10, from California, through Arizona, to New Mexico.

There are currently about 75 wolves in the Blue Range Recovery Area.   U. S. Fish and Wildlife wants the expanded area in order to promote breeding diversity.  In Arizona the area that will be most affected is Mogollon Rim country from the Grand Canyon to east of Show Low.  Basically everything north of I-10 and south of I–40 is part of this proposed range expansion.

It should be noted that federal wildlife officials have drafted plans to lift protections for gray wolves across the lower 48 states as it is felt that they no longer qualify for endangered species protection.  The control of the gray wolf population would then fall to state wildlife agencies.  However, protection would remain for the Mexican gray wolf as a sub-species, and federal agencies would continue to manage them.   See Mexican Gray Wolves’ Territory May be Expanded.

Does this wolf range expansion pose a threat to Rim Country?

This is a photo of a cage that has been built for children waiting for their school bus.  It was built, because children have seen wolves lurking in the area. 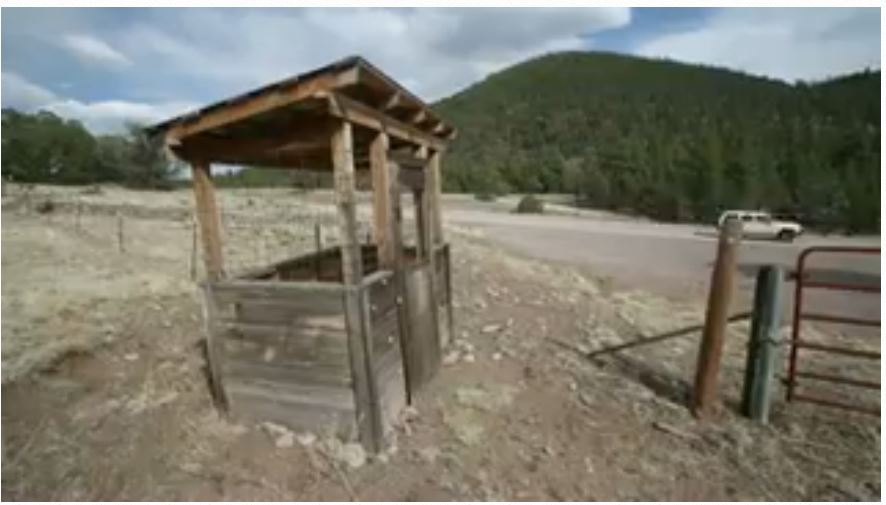 The Mexican grey wolf prefers mountain woodlands and is most often spotted in pine, oak, and pinyon/juniper forests above 4500 feet. As compared to other national parks in our country, the Tonto National Forest has one of the highest populations of recreational visitors who come to camp, hike, bike, and hunt. The Tonto is also heavily populated with small residential communities.  Children living in these communities often walk half a mile to their bus stop.  This would seem to increase the likelihood of wolf/human contact.

If a wolf/human contact occurs, how dangerous could the encounter be?  A Mexican gray wolf can reach a shoulder height of 32 inches, measure as long as 5 ½ feet from the nose to the tip of the tail, and weigh as much as 80 pounds.  While the wild wolves that originally inhabited the area were generally reported to shy away from human contact, there are some differences of opinion about the behavior of these captive-bred wolves.  Evidence exists that there has been some interbreeding with domestic dogs.  Mexican gray wolves in captivity have been found to have a percentage of domestic dog genes. See Wolves.

When the first litter of wolf pups was born, it was noticed that several had “bent” ears…a characteristic not common to wolves.   The explanation given for this was that some breeding with domestic dogs was done because the small number of captured wolves initially brought back from Mexico provided a limited gene pool.

Would wolves of such breeding that have been raised in captivity have a lessened fear of humans?  The ranchers who live in or near the Blue Range Wolf Recovery Area experience contact with these wolves on a regular basis.  According to them, there is definitely a lessened fear of humans.  Catron County, New Mexico, is situated in the secondary release zone. Residents describe the area as a “war zone” with the wolves preying on livestock, chickens, and family pets.  The ranchers can only kill a wolf to protect livestock, but chickens and family pets are fair game, and a large number of kills have been reported.  Parents fear for the safety of their children.  See Under Siege in Wolf Country.

In response to outrage from ranchers about livestock killed by wolves, officials from the recovery program enacted an outrageous “three strikes” policy for released wolves.  If a single wolf is found to have made three confirmed kills within a year, the wolf is trapped and returned to the original captive breeding area for one year before being released again.  They are able to identify individual wolves by identity numbers and collars that are placed on the wolves upon release.  Can wolves count to three?  See Bad Wolf!  Now go to your Room! 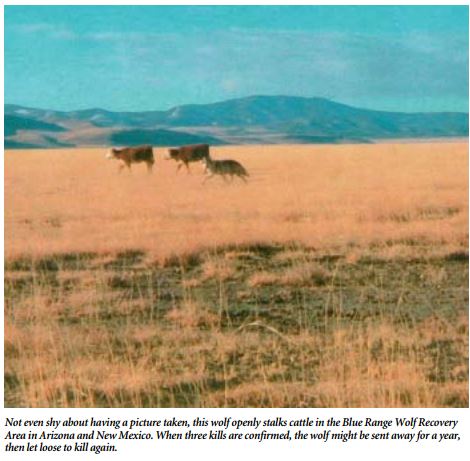 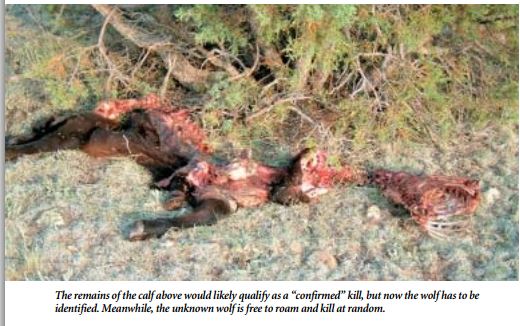 Gary Kiehne, a rancher in Eager, Arizona, talked about children waiting for school buses in cages to protect them from prowling wolves.  See Opinions on Wolves – Predators & Kids)  He also told of numerous cattle losses he has incurred, including two 650 lb. steers that were attacked by wolves and gutted last month.

Do residents of Rim Country have a say in this expansion plan?

The proposed plan for expansion of the Mexican gray wolf range could have serious implications for us.  Did the U. S. Fish and Wildlife Department plan to ask Rim Country residents how we feel about this…or even tell us the basic details of their plan?   Fish and Wildlife seems to be “flying under the radar” on this as evidenced by the minimal effort put forth to publicize the range expansion.  Some people have leveled criticism at this agency for not thinking the expansion plan through more carefully.  A number of supporters of the expansion of the wolf habitat feel that the proposed range is not the best choice and have suggested that a designated range north of the Grand Canyon would be better.  Instead of public meetings, U. S. Fish and Wildlife has instituted a 90-day comment period for people to voice an opinion.  This ends on October 28!  Members of the environmental groups have been leaving comments for weeks.

If not for the Roundup articles by Dennis Pirch on 9/3/13 and Pete Aleshire on 9/6/13, most of us would not even be aware of the wolf expansion.  I thank James Goughanour for his letter to the editor about this and appreciate Steve Smith and all the other ranchers who came from Springerville to share their first-hand experiences.

With a limited time before the end of the 90-day comment period, it’s important to make your feelings known quickly.  There is strong support for the range expansion by environmental groups (who don’t actually live in the proposed range like we do).  If there is no feedback objecting to the plan, it will likely be enacted.

1.  Share your views with the Arizona Game and Fish Department commissioners at www.azgfd.gov.   Click on “Send comments” at the bottom of the page.  Or click here.

NOTE:   A sportsman’s group has pushed for a meeting in Arizona to permit local input.  (A few meetings have been scheduled in places nowhere near Arizona or New Mexico.)  If a meeting is ever actually scheduled to be held in our area, please try to attend!

3.  OTHER CRITICAL CONTACT INFO PROVIDED BY STEVE SMITH LAST THURSDAY NIGHT:  Remember comments must be received by October 28th.  Keep it short and to the point.

a.  Go to Regulations.gov and enter the following locator number (docket number) in the search box.  FWS-R2-ES-2013-0056  Use this docket number to comment on the FWS “proposal to revise the existing nonessential experimental population designation of the Mexican wolf (including expanding the geographic boundaries on the Mexican Wolf Experimental population Area in Arizona and New Mexico and modifying the 10(J) rule for managing the experimental Mexican wolf population)”.  This is the one we are most concerned about commenting on.

b.  Go to Regulations.gov and enter the following locator number (docket number) in the search box.  FWS-HQ-ES-2013-0073.  Use this docket number to comment on the Fish and Wildlife Service “proposal to delist the gray wolf from the federal list of threatened and endangered species and "maintain endangered status for the Mexican wolf by listing it as a subspecies.”  (How can they be a subspecies if they are part dog?)