If Charles Dickens were to write a story today, it wouldn’t be about Ebeneezer Scrooge. It would be about Linda Abbott, Dave Crozier, and Les Presmyk who have voted repeatedly to raise taxes on Gilbert citizens. Why did these people, secure in their jobs and pensions, do it?

They did it to ensure that Gilbert’s Town coffers remain heady and secure. They did it so they could repay the millions in debt they racked up when they overpaid for parkland, recreational venues, and other facilities. They did it because they lack budgeting, management, and business skills. But mostly, they did it because they don’t care about the Gilbert families who are suffering through this ever deepening recession.

“Are there no work houses?”

Take a look at the illustration below. Budget Administrator Dawn Irvine showed this twice to the Citizens Think Tank members, on March 2 and again on March 9. What you will see in the illustration is well known to Linda Abbott, Dave Crozier, and Les Presmyk.

Your and my reaction to this illustration is far different from that of these incumbents running for re-election and their hand-picked syncophant Think Tank committee members who recently recommended new taxes. 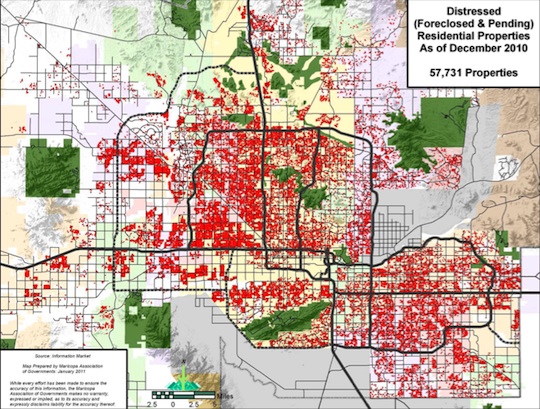 How do you feel, knowing that every red dot…some of them so close together they appear to be bleeding…represents the loss of a family’s home? Do you think those families suffered pain and anguish? Do you think children living in those homes felt shame having to tell their friends they have to move away because they just lost their home? It happened in my neighborhood. Eight families in three blocks. Did it happen in yours?

It’s tough on kids to say goodbye to their friends, isn’t it. It’s hard on them to move to a new neighborhood, a different school, and to make new friends. How many children were there among those 57,731 foreclosed and pending foreclosed homes? A hundred thousand?

What does this mean to the incumbents? It means less money for their plans, programs, and strategies. After all, they don’t want to live in a “cheap town.”

All of these incumbents heard residents plead with them at Council meetings to not raise their taxes. These incumbents didn’t care about them. If they did care, taking more money from people losing their homes would NEVER be an option. Never! They should be ashamed.

The date is May 5, 2009, less than 4 months after Linda Abbott, Dave Crozier, Les Presmyk and others on the Council at the time voted to spend $25 million on parcels of land called Rittenhouse and Chandler Heights, and another $50 million on parcels called Zinke.

Throughout this reckless spending spree, these “visionaries” lived in a bubble of denial, refusing to see the economy collapsing around them. What they do see is a pesky deficit in the General Fund that must be fixed.

Here’s the background to the scene: The Council has spent weeks trying to figure out how to bridge a $14 million deficit, but can’t pull it off. They are forced to rely on former Town Manager George Pettit’s budget cutting skills.

Ms. Abbott is peevish. She daringly pulls out her “All Purpose Budget-Repair Tool,” and comes to the rescue!