FACT:  Radical Leftist organizers and unions, including Promise Arizona en accion (aka PAZ), UNITE HERE, and Campaign for Arizona’s Future (Adios Arpaio), boast that they registered  34,327 new Hispanic voters in Arizona this year.  Believe me, they didn’t register any Republicans.

They even used children, some as young as 6 years old. 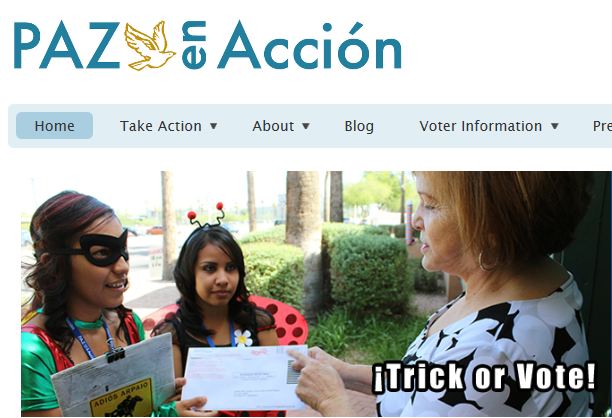 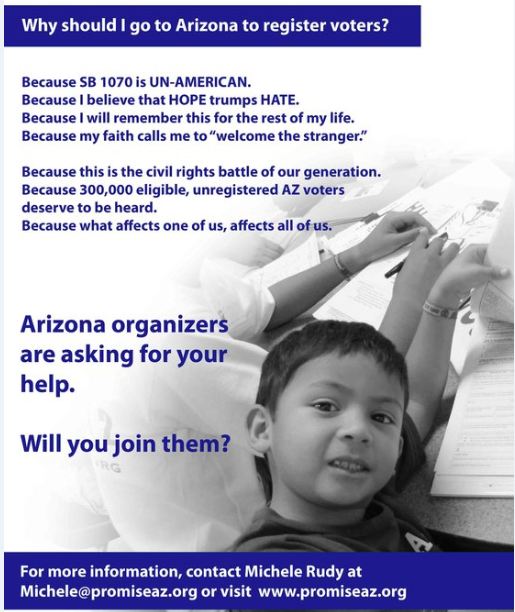 It’s obvious that the progressive socialists have a more effective, though smarmy, ground game, than Republicans. 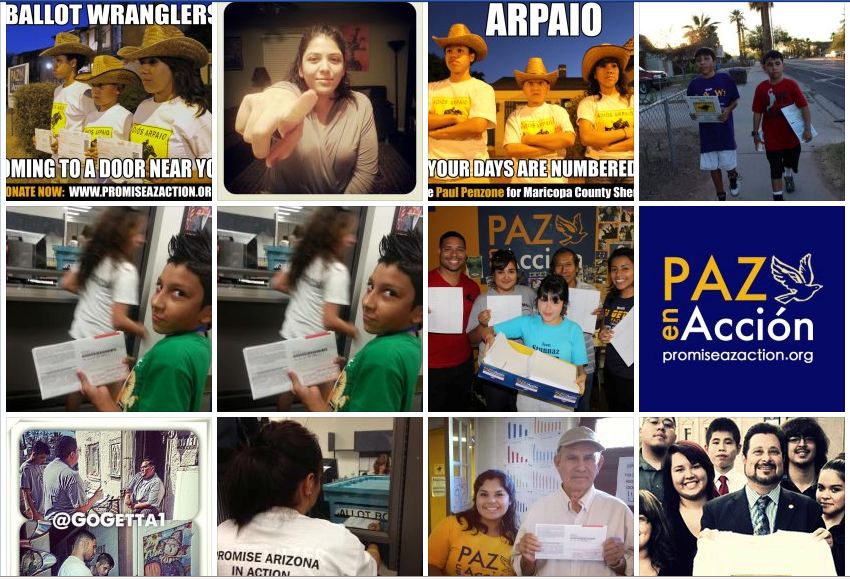 How do they do it?  Through their passionate, grassroots dedicated volunteers?

You be the judge.  Here’s a Career Opportunity offered by PAZ en Accion on their website.  Notice "We offer a competitive salary and benefits."  Do you think these young people know the Truth about how deeply Arizonans love people who come here legally, no matter their skin color, religion, gender, age, ethnic background; no matter if they are rich or poor?   No.  They are told only that SB1070 is HATEFUL, and that Sheriff Joe Arpaio is HATEFUL.  And that Arizonans are HATEFUL.  So, where does Promise Arizona (PAZ) get its money? 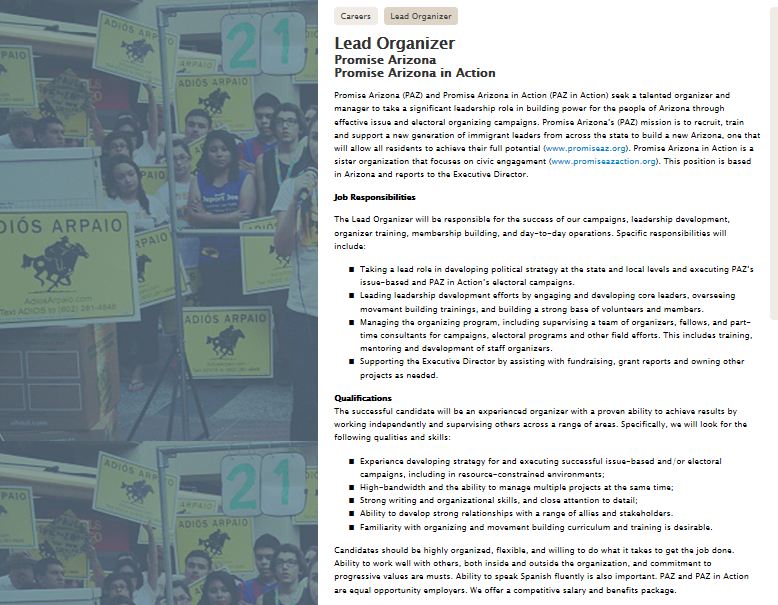 Although the leftist organization Campaign for Community Change is a contributor to PAZ, the biggest contributor is UNITE HERE, with a whopping $471,500.  Who is UNITE HERE and where do they get their money?  UNITE HERE is a labor union in the United States and Canada with over 250,000 members.

Here’s an interesting item about this group.  UNITE HERE is one of the many "favored" groups that have received a waiver from Obama’s "signature" healthcare program.  No inferior, government run ObamaCare health care plan for them!

The reason for getting rid of Sheriff Joe Arpaio?  SB1070.  That’s the reason the progressive socialists wanted Russell Pearce gone.  It’s the reason that Arizona Conservative legislators are being targeted.

If you turn Arizona blue, you will definitely get rid of SB1070.

Here’s a walk down the Progressive Socialists Memory Lane: 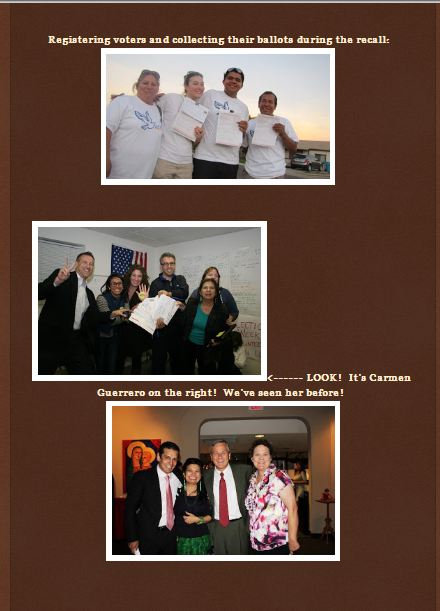 Do you actually believe that the Pearce Recall was a true "bi-partisan" effort?  Here you see the Progressive Leftist victors, Raquel Teran, Randy Parraz, Chad Snow (lifelong RINO), and the usual gang celebrating THEIR victory.

Parraz isn’t your ordinary progressive socialist/agitator media hound, and there’s nothing "bi-partisan" about PAZ.  He had to work carefully to obtain "bi-partisan" support to defeat Pearce.  Here are a few he duped and will dump, because his goal is and always has been to eliminate SB1070 and to overcome ALL Republicans. 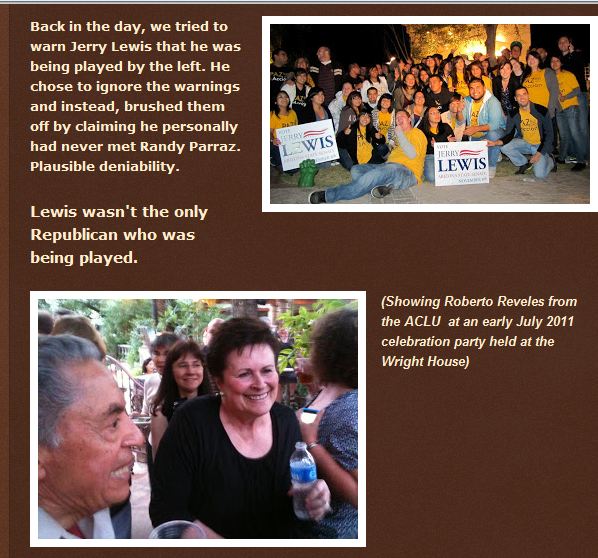 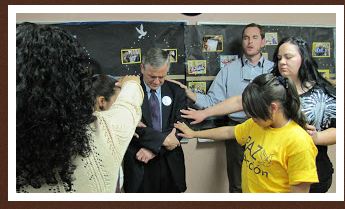 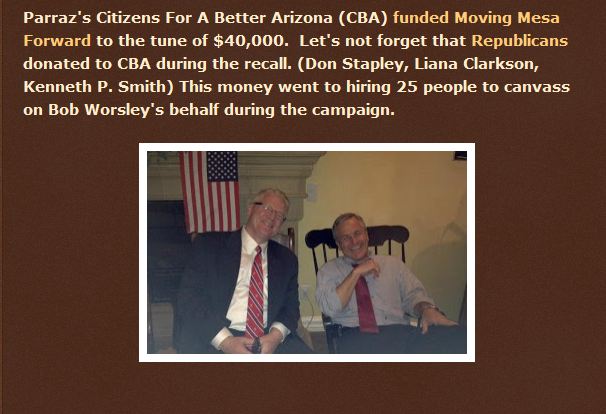 People like Bob Worsley and Jerry Lewis are accustomed to being respected and revered.  They won’t be willing to tolerate intimidation and demonization from the Left,  which is what Russell Pearce had to bear when he stood up for the taxpayers and legal citizens.  So, in order to be somewhat "acceptable" to the Left, both Worsley and Lewis are going to have to learn to go along and get along.

If you think the Left has embraced Lewis, you’re wrong.  They’ll replace him with a Democrat as soon as they can. 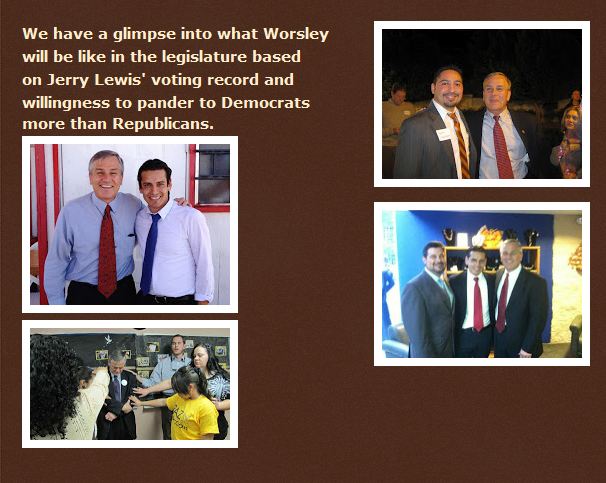 The good news is that, right now, Republicans still outnumber Democrats in Arizona.  The key for us in this election is to GET OUT THE VOTE!  Call every conservative friend and family member and insist that they VOTE the Republican ticket!  Vote NO to Prop 121 and NO to Prop 204 and to every bond and override.

After this election, we need to register new conservative Republicans by the trainload!  Because if we don’t, Arizona will be run by Democrats in the near future. According to the Secretary of State’s office, there are 1,120,992 registered Republicans and 952,931 registered Democrats.  That’s a spread of only 168,061.  Registered Independents number 1,023,603, which is why their votes are critical to Republicans.