Whenever conservatives begin to gain a little power, you can expect the entrenched collectivist forces, aided and abetted by the “mainstream” media to start a War against us.  Why are you surprised by the media’s sudden interest in the Gilbert school board’s decisions?  Nothing like blood in the waters to attract the media sharks to go in for the kill.

The truth is that Media bias is so well established in America that it is measured by how much the American people distrust it.  The mainstream media provides shoddy, glitzy, Leftist, junk journalism, yet people who think they know how to think still get hypnotized.

The mainstream media despises conservatives and every principle we stand for.

They sneer the words “TEA Party.”  The only “governance” they promote is centralized, not self governance.

To the mainstream, government is the solution to every problem that government created in the first place.  With a little investigation, they could offer unbiased journalism.  But they are not unbiased.  They are Leftist Progressives.  (See Who is the Leftist?  Who is the Liberal?)

Their most recent junk hit pieces would have you believe that GPS administrators have left in disgust over the actions of an imbecilic, TEA party (gasp) board, not due to a long standing system of destructive good old boy protectionism within the GPS hierarchy.  Western Connections has been reporting on this for a few years.  In fact "Westie" has reported on the abuses of the Good Old Boys so many times that the term has been shortened to GOB’s.  (Here’s a sample:  Gilbert Public Schools Admins:  Still Stirring up Trouble.) These truths don’t fit the "mainstream’s" Leftist world view, so they make up what does:  See Parents question Changes at Gilbert Public Schools

Here is the lie stated in another truly disgusting piece of junk journalism by Brahm Resnick:  "Gilbert Town Councilwoman Jenn Daniels says her community must rally around its historically strong public schools, as turmoil at the School Board sends many educators out the door."  If you watched this hit piece, he even pounded his fist on the table trying to get Council Member Daniels to throw "TEA Party" conservatives under the bus.   She didn’t take the bait.  (See Gilbert leaders plead for unity amid School Turmoil.)

Never let the Truth get in the way of a good story, especially if it’s a hit piece against conservatives, right Brahm?

This one’s for you, you little squint:  The Rita Skeeter Interview:  Harry Potter

The Previous Board:  Dereliction of Duty

Prior to the election of Ms. Staci Burk and Mr. Shane Stapley in November 2010,  the Gilbert School Board had been voting in lockstep, approving virtually every recommendation spoon fed to them by Administration.  Look up the Minutes of those “peaceful” meetings (if they haven’t been scrubbed).  For years, the previous Gilbert School board had neglected one of their most important responsibilities:  to be the community’s accountability mechanism, ensuring that school officials wisely and responsibly spend taxpayer dollars.

Burk and Stapley didn’t have the votes to make changes, but their desire to fulfill their board responsibilities rankled the status quo.  So, the anti-conservative forces showed up at the meetings to subject these board members to a steady diet of ridicule.   Even the top administrators in the district showed their disrespect in board meetings by referring to Ms. Burk as “Staci.”

Did any of this behavior toward Ms. Burk and Mr. Stapley get reported by the news media?  No.

Serious Agitating and Provoking of Conservative Board Members

The ugly insults and mocking ramped up when the conservatives became a majority.  That’s when Ms. Julie Smith and Mr. Daryl Colvin were elected and joined Ms. Burk.  (Mr. Stapley had resigned due to having moved out of the district.)   The three conservatives accomplished much, in spite of the tantrums, catcalling, and rudeness during board meetings from certain teachers, staff, and members of the public.  The anti-conservative audience routinely stood up and cheered loudly when Ms. Tram and Ms. Humpherys entered the board meetings, and sat down and treated their conservative enemies to silence.

Did the pencil necked clowns in the "mainstream" report any of this?  No.

"Tailgate" Parties Called by the President of the Gilbert Education Association

Finally, even the news media couldn’t ignore the infamous “tailgate" parties called by Diane Drazinski (president of the Gilbert Education Association), in which GPS teachers and other District employees held up opposition signs in the District parking lot and chanted and hissed at the conservatives as they walked in to the board meetings.   Westie accurately called out these malicious agitators for what they are in Who is Inciting Violence in Gilbert Public Schools?  How did the "mainstream" report it?  This article would have you believe the conservatives “deserved” their rude treatment.  See Fed Up Parents, Teachers pack Gilbert Board Meetings.

How could we forget the Facebook post by an illiterate GPS staffer who called her 3 conservative employers “bafoons.”  She went on to write, “Yes, I said bafoons!!!  I AM MAD!!!!”  She was apoplectic because the teachers got a raise, but she didn’t.  Other comments supported her screed with “I think what you say.”  “Preach it, girl.”  “Is anyone working on recalling the “bafoons”?  “I would support a recall!  Let’s do it!  I’ll help!”  See Gilbert School Board Meeting Tonight:  Attack the Conservative Board Members!

You missed it?  Guess it wasn’t reported by Channel 5,  Brahm Resnick, AZ Central, or any other "mainstream" media outlet, even though these kinds of Facebook posts are commonplace from the people who are around your children every day.

Let’s not forget who started this War and who continues provoking, insulting, and mocking conservatives at every opportunity.  Many of these people are members of the Gilbert Education Association (“tailgate parties”).  These GEA members especially despise the conservative board members ever since “the conservative crazies” voted to extend legal protection to all teachers, not just to union (“association”) members.

Did your local media pencil necks report that the Future Farmers of America (FFA) students were forced to stand in the hall at the 2/11/ 2014 board meeting, because the crude and rude members of the Gilbert Education Association wanted their own powerful presence felt among the conservative members of the board?  They even brought in their bigger guns, the Arizona Education Association.  Western Connections, cited this in a Facebook post:

"The good people of Gilbert need to know about how students were forced out of the board room last night. The assembled protesters (most NOT from Gilbert) refused to make room for the Future Farmers of America honorees … students who were attending the meeting at the invitation of the board to accept a proclamation honoring them. The FFA students were forced to mingle out in the hall among the bitter assemblage of AEA/GEA agitators. The AEA president Andrew Morrill was front and center, organizing the group that was disrupting the meeting. Don’t think for a minute that group was there "for the kids." Their actions in excluding FFA students from participating and accepting the board’s congratulations speak louder than words … and we all know how crude and rude their words have been."

So, what did the malpracticing media choose to report?  There has been a rash of articles!  Now that the Governing School Board has gone through monumental struggles in making one of the most serious decisions of their tenure–the selection of a new superintendent–the news media suddenly “investigates” the Facebook post by one of the conservative board members, and quotes that board member’s response to the hostility he has been subjected to for over a year.  There is mayhem at the board meeting in which the new superintendent, Ms. DeJesus-Kishimoto, is announced. (See Exits, Turmoil in Gilbert Schools.)

Teachers Ranting Against the Conservative Board Members in the Gilbert Classrooms

Most recently some teachers have been so ginned up by the media articles and agitation from the "association" (aka unions), they have taken to ranting to their students against the conservative board members.

Teachers were not only telling students that the conservative board members are turning their schools into a "private" school, but that the kids will have to start wearing uniforms.  They called out the Board president by name, saying "She’s ruining the district."  And another was telling students that the District will be building more charter schools.  (Even though the District has never built a charter school.)    "Go home and tell your parents about these horrors."

Right.  Where’s the noose and a tall tree?

The emails to Superintendent Jack Keegan caused him to send out a letter to parents stop the "rumors."  (See below.)

You want to stop the WAR?  It’s easy.  Surrender.  As for me and a lot of other conservative fighters, I’d rather be a "crazy conservative" than a coward.

Here is a small sample of articles that have been written about these issues (unreported by the Malpracticing Media):

Gilbert School Board Struggles to Allow Parents a Voice in Choosing Reading Materials (Begin watching the video at 01:13:00 to see how hard both Ms. Tram and Ms. Humpherys fight against Ms. Smith’s desire to fulfill one of her most important board responsibilities:  "to provide parents and members of the community with a voice into the education of their children." )

Technically Correct, Gilbert Schools Administration, but what are you hiding?

GPS Dictrict Retaliation and a Former Board Member’s huge mistake

Mesa’s God is Unwelcome in Gilbert 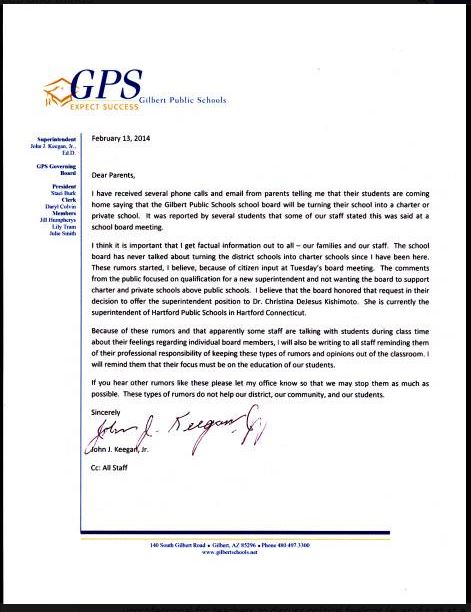