How can you tell the difference between a true conservative and a left-leaning Republican?  The lefties are willing to lie, steal, and cheat their way into office.  Is it any wonder that they lie, steal, and cheat while they are in office?  So it is with Bob Robson, who steals his opposition’s campaign signs; so it is with Bob Worsley who fraudulantly campaigned as a "conservative," but voted with the Democrats so often that he was ranked "Champion of Big Government" by Americans for Prosperity-AZ.

And so it is with "Team Diane Landis" that has the chutzpah to call Darin Mitchell, who has achieved "Hero of the Taxpayer," "Champion of the Taxpayer," and "Top Scores in support of principles of limited constitutional government" a……liberal.  The opposite is the Truth:  Landis is the liberal, ranking "Ally of Big Government" by Americans for Prosperity.

Do you know what Landis, Robson, and Worsley all have in common?  They think the voters are stupid.

Darin Mitchell has responded as follows.

Team Diane Landis sent out a desperate last-minute attack mailer falsely accusing Rep. Darin Mitchell of being for amnesty.  Of course, it is a total lie.  Consider the following facts and determine for yourself how desperate they have become, and how unfit for office Diane Landis really is.

The mailer says that “Darin Mitchell Supports Amnesty” and that “Mitchell is Too Liberal For Arizona.”

Mitchell has a perfect 100% voting record on border issues

Mitchell has been endorsed by Sheriff Joe Arpaio

Mitchell has been endorsed by Russell Pearce, the author of SB1070

So who helped Team Landis with this attack?  Well, we can’t say who paid for it because they refuse to disclose their donors, in violation of Arizona law.  They failed to even provide the notification to the candidates, as required by Arizona law.

Who are these lawbreakers?  AZ Liberty Alliance PAC/Lincoln Strategies is at the helm.  A firm well-known to Arizona Conservatives because Nathan Sproul and his clan regularly attack pro-border security legislators like Russell Pearce and others, and they are known for running dirty and dishonest campaigns.  They’ve also been investigated for voter registration fraud in various states and more.  They work primarily for open-border candidates and donors.

To summarize, Diane Landis’ team has gone to a liberal, open-border firm, to produce and distribute an illegal campaign mailer that tells a complete lie about the House’s most conservative member.

Landis should apologize for the gutter politics and the blatant lie.  Voters who know her, know she’ll never apologize because this is the kind of campaign she has run since the beginning.  The voters of LD13 deserve MUCH better than Diane Landis and her friends. 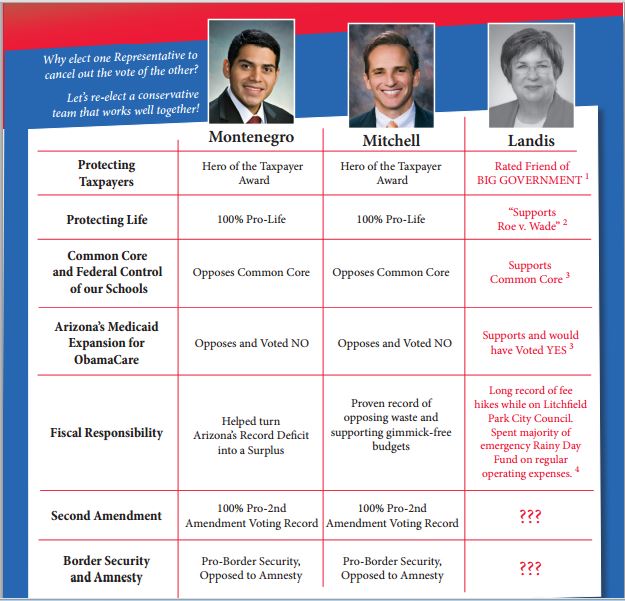