Gilbert Watch recently became aware of an irresponsible decision made by 3 members of the Higley School board.  They voted 3-2 on September 10, 2013, to accept $750,000 in grant money from the Maricopa County Board of Supervisors to construct and operate a 24-hour publicly accessible Compressed Natural Gas (CNG) station.  The board members who opposed this decision are Jake Hoffman and Kristina Reese.

What is wrong with these other three board members?   Logic and data seem to have no place with the majority of the governing board.   Why not build a solar power plant while you’re at it?  Not only did Venessa Whitener, Kim Anderson, and Denise Standage refuse to pay a shred of attention to Board Member Hoffman’s pleas to table the agenda item for further research, but they also refused to consider several of his numbers-based arguments.

Would somebody give them a course in Marketing 101?  Economics 101?  Math?  The Basics of Research?  How about teaching them the Founding documents of this country and its free enterprise philosophy?

Thus, Higley Unified School District will spend your tax dollars trying to run a gas station, while attempting to semi-educate your kids.   This tax-supported Compressed Natural Gas (CNG) fueling station will compete directly with a privately-run CNG station less than five miles away, Clean n Green.  Higley’s government-run station will cost the taxpayers far more than the measley $750k in grant money. Board member Hoffman estimates the cost to taxpayers at $2.3 million.  One of the reasons that Higley wants the CNG station is to reduce air pollution created by busses.  However, the District doesn’t own any CNG vehicles!  The District would have to replace 62 busses and 53 fleet vehicles.  Compressed Natural Gas (CNG) is yet another "environmentalists’ dream" fuel technology that has not succeeded in the market without taxpayer subsidies and tax credits.

According to Governing Board Member Jake Hoffman, “This is yet another example of government, more immediately this school district, attempting to outsmart the free market by arbitrarily choosing the winners and losers.”

This has FAIL written all over it.

Here is the chain of events that led to this fiasco, followed by an ACTION you can take to stop it:

HUSD presented to the previous governing board in December 2012 on their desire to tap into a CNG main line that runs alongside the district’s transportation headquarters.  They estimated the cost of doing so to be approximately $1 million or more.  Ironically, at the same work study meeting the comment was made by the district’s superintendent that if the 2013 overrides failed 40+ teachers and extracurricular programs would be on the chopping block.

Fast-forward to September 9, 2013, the day before the governing board meeting, the board was presented with an agenda item calling for the approval of a grant for the purpose of constructing a CNG fueling station on district property.  The grant is for $750k; however, the projected cost to build the gas station is nearly $1.2 million.

Higley Schools "failed to provide the board with a cost/benefit analysis, revenue potential analysis, comparative fuel cost trend study, among other data," Hoffman said during the debate.  According to Hoffman, the net cost of implementation after all grant funds have been utilized will climb to well over $2.3 million over the course 10-12 years.  He calculated this based on the requirement, included in the grant language, that the district change its purchasing specifications to require the purchase of only CNG vehicles in the future.  Doing so comes at a huge additional expense to the district.  The Director of Transportation’s December presentation estimates the additional expense to be approximately $30,000 per bus (62+ owned by the district) and a quick phone call to the fleet sales department of the Ford dealership utilized by HUSD revealed an additional expense of approximately $18,000 per other fleet vehicle (53+ owned by the district).  Currently, Higley Schools does not own or utilize any CNG compatible vehicles.

In trying to convince the three veteran board members of the dangers of approving this proposal and to address the repeated claims that the project would be a “revenue generator” for the district, Hoffman even provided statistics regarding CNG vehicle registrations in the U.S. in an attempt to show that a viable market does not exist for the technology.  He informed the board that there are approximately 260,000,000 personal passenger vehicles registered in the U.S. not including commercially registered vehicles; in contrast, he stated that there are “only” approximately 112,000 personal and commercial CNG vehicles registered in the United States — a mere “four one-hundredths of one percent” of the total number of registered vehicles.

ACTION:  GET INVOLVED TO STOP THE ABUSE OF TAXPAYER FUNDS AND KEEP HIGLEY FROM BUILDING A PUBLICLY FUNDED GAS STATION.

The grant funds still have to be given final approval from the Maricopa County Board of Supervisors later this month.  The County, acting on behalf of the EPA or some other federal environmental agency, is giving $1 million in pollution reduction grants to the various entities in the vicinity of Queen Creek.  Higley Unified School District is slated to receive $750k of the one-million allotted in order to construct the gas station.

Maricopa County Board of Supervisors

Here are a few reasons that can be given to the Maricopa County Supervisors supporting denial of the funds to Higley:

The total cost of implementation was not known when the HUSD governing board approved the grant proposal and the board was not adequately prepared to consider long-term viability of full implementation.  The grant proposal states that a “comprehensive cost analysis” was completed “prior to submitting this project for your consideration”; however, no such documentation was provided to the public or the Governing Board Members responsible for approving this project.

A basic cost benefit analysis conducted after the fact show a significant net expense to the district over the next decade.

The project does not represent the greatest and best use of funds for the children in the school district.

The proposal application is founded on the claim that Higley will change its purchasing specifications to require the purchase of CNG vehicles as the district’s existing fleet of approximately 115 vehicles requires replacement.  There is a significant net expense associated with the purchase of CNG vehicles versus diesel or unleaded. When questioned by governing board member Jake Hoffman at the Sept 10, 2013 board meeting on the ramifications this diverted revenue would have on students over the next 10-15 years the Board President, Vice President and Superintendent all stated that the district wouldn’t necessarily replace all district vehicles with CNG.  It seems that either the public is being deceived as to the full cost of implementation OR the County Board of Supervisors is being deceived in an effort to fraudulently obtain grant funds.

The air quality benefit proposed by HUSD in the grant application is only possible once the district has replaced a significant portion of the fleet with CNG vehicles.  Currently the district has zero (0) CNG vehicles and does not plan to immediately buy more than one or two.  It will be 10-15 years before HUSD will have enough of their fleet running on CNG for the air quality benefit proposed in the grant application to even be realized.

Compressed Natural Gas (CNG) is a fuel technology that has not succeeded in the market without the crutch of government subsidies and tax credits.  Arizona has only a handful of CNG stations and only one exists in the East Valley.  CNG vehicles represent less than four one-hundredths of one percent of all vehicles registered in the United States.  Education is not the appropriate petri dish for unproven, currently unsustainable commodities.

Arizona state law prohibits government entities from directly competing with private industry.  The nearest CNG fueling station to HUSD is a private company, Clean N’ Green, in Mesa.  Considering the incredibly limited selection of CNG fueling stations in Arizona, a government run CNG gas station would necessarily and directly compete with private enterprise, more specifically, Clean N’ Green.  It is also worth mentioning loud and clear that HUSD would likely crush Clean N’ Green considering their ability to disregard profit and subsidize the operation with a constant flow of tax dollars.  The district site at which Higley wants to place this publicly accessible gas station is less than 5 miles from Clean N’ Green.  See map. 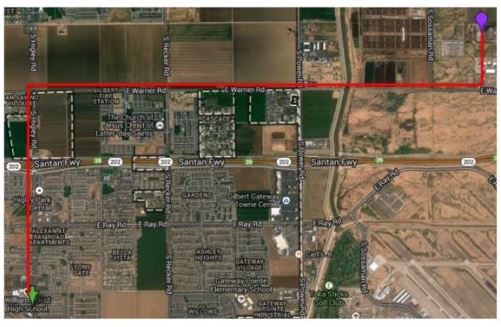