The war on coal is not over and writing your Congressman is not enough. Obama’s EPA is fighting this war for him, and so far they’ve managed to keep the issue out of Congress by using new EPA rules and executive orders.

The prime target in Arizona is the Navajo Generating Station (NGS) in Page which generates 90% of the electricity used by the Central Arizona Project (CAP).   CAP is the major water supplier for Tucson and all the cities in the Phoenix area, plus all the farms in between. Mohave power plant is already gone; shutting it down made more sense than complying with new EPA regulations. Coronado, Cholla, and Apache power plants are also targeted.

The owners of NGS recently revealed their grand plan to comply with EPA demands without spending a billion dollars. They will shut down part of the plant, so they don’t produce as much pollution. They won’t produce as much electricity either, but that’s somebody else’s problem.

The owners of NGS call their new plan “Better than BART” and are promoting it in the media. I call it negotiated surrender. They saw no hope that anybody would speak up to try and stop the EPA, so they cut a deal that costs them less than a billion dollars. If there’s a power shortage in the future then they can always charge customers more to build a new power plant, to replace the perfectly good plant that got closed.

Why is the EPA coming back now to set new standards for power plants that have been operating for decades? Because the President wants them to, and they don’t have to go through Congress to make it happen. Check out the following graph from a blog by William Yeatman of the Competitive Enterprise Institute. A "Disapproval" is when the EPA decides a state’s plan to meet a new EPA rule isn’t good enough or fast enough and tells a state to fix it. A "Takeover" is when the EPA takes control and tells a state how they must implement it. 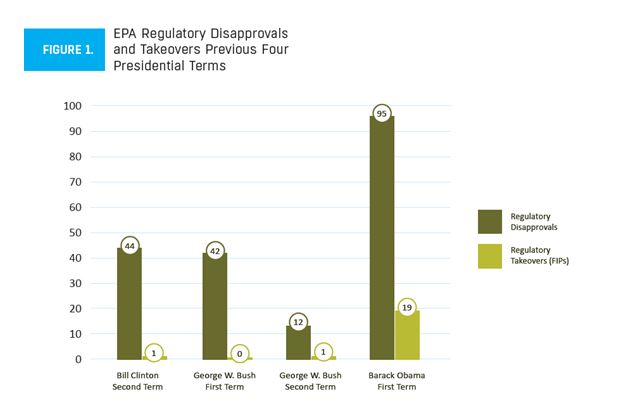 I  hope you recognize that the EPA is changing your lives, and that we must begin to put the brakes on them. As originally chartered, the EPA was a technical resource for the states to use in setting their own environmental policies. It has turned into a regulatory agency that tells the states what to do and punishes them if they don’t do it the right way.  At some point, a practical solution might be to see that Congress changes the law so they can put the EPA on a short leash.

In the meantime, are you going to do something, or start practicing stories to tell your grandchildren about the good old days when water and power were available 24 hours a day? There are two things you can do in the next few weeks to protest the EPA’s business crushing rules.

First, the EPA will come to Phoenix on November 14 to listen to public comments on how changes at the NGS will affect individuals and organizations. Plan to be there and stand up and make a comment. Go to EPA:  Navajo Nation Air Actions.

Second, the EPA is going on a public listening tour about greenhouse gas emissions and regulations. Once again coal is the major target, and none of the listening sessions will be held in states that rely heavily on coal power plants. For this one you will have to submit a comment by mail or email before November 8.  Go to EPA: Public Listening Sessions.