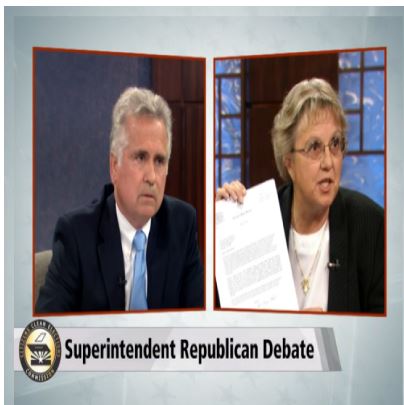 As Huppenthal waxes philosophical, Douglas pulls him back on point.  Over and over and over.  If you watch the debate, pay close attention to the hard facts presented by Douglas which Huppenthal tries to either spin, or run from. The truth is that Huppenthal did indeed champion Common Core.  Huppenthal did indeed sacrifice Arizona’s sovereignty in exchange for a small amount of money, allowing federal control.  Douglas points out that Arizona doesn’t even own the copyright of Common Core.  She also points to the insidious data mining of information from parents and children.  Huppenthal himself is part of the culture of corruption within the Arizona Department of Education.  Douglas points out what she and many others have always known:  Common Core is indeed the product of the federal government, and Arizona’s education will be dictated by the federal government.

It’s refreshing to watch someone like Douglas who is, as McQueen calls her, a "straight talker."

She knows exactly what she’s talking about.  She knows far more about Common Core than Huppenthal ever will.  She also knows more about how to implement a clear alternative.

Common Core’s Validation: A Weak Foundation for a Crooked House

Why Conservatives Support Frank Riggs for Governor of Arizona