It has never been more important than now to elect solid conservatives with a voting record that backs up their rhetoric.  So it is with Warren Petersen, who is running for Arizona Senate in LD12.  As a state representative, he stood up for families and the unborn, for local support and control of education, and for the independent business person.  His votes are testimony to his fight against overbearing regulations that hurt businesses and our economy.  He has repeatedly protected our Second Amendment rights.  Rep. Petersen is very knowledgeable about complex issues, and he knows how to protect the hard-working taxpayer from the big spenders at the Capitol.

Based on his voting record, Warren Petersen earned a 100% rating by the Center for Arizona Policy for his Pro-Life, Pro Marriage and Family, and Pro Religious Freedom votes.  Even before Rep. Petersen was elected to the House of Representatives, he volunteered thousands of hours to the youth of Gilbert, specifically in the scouting program. He was a Prime Sponsor of HB2074, which reduces red tape on foster parents and children.  This bill increases license validity from 1 to 2 years and allows siblings to stay together when making placements. 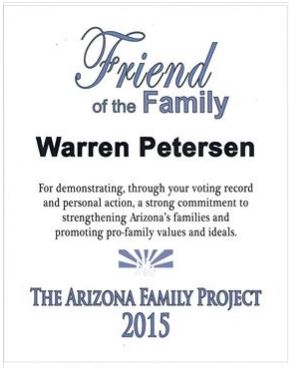 Long before running for office, Warren Petersen ran a one year campaign focusing on teaching his fellow citizens constitutional principles.   He knows that our Liberties cannot endure unless we are willing to preserve and protect them.  Warren has registered well over 100 people to vote and recruited more than 15 precinct committeemen.

As a legislator, Rep. Petersen voted against the nationalized Common Core Standards*  He also voted to give parents the right to opt their children out of unvalidated, forced assessments.  (See Feds Admit U.S. Education Department "Forced" States to Accept Common Core From its Start.)

Rep. Petersen has received some of the highest scores from the American Conservative Union, Arizona Small Business Association, the National Federation of Independent Business, Arizona Republican Assembly, and Americans for Prosperity-Arizona.

He has sponsored many bills that have been signed into law by the governor including HB2608, which eliminates pensions for politicians.  "I was appalled with the ridiculous pensions that were provided to our elected officials.  Now in the state of Arizona politicians will have the same retirement options as the private sector," stated Rep. Petersen.

He always works to improve the business climate in Arizona.  HB2147: Reduces unemployment fraud.  For about a decade Arizona has consistently ranked as one of the worst states at paying erroneous unemployment benefits.  This bill was hailed by businesses and by two major papers as a bill that will make a major impact in Arizona.

HB2526: Ensures that small business owners have a seat at the table when new regulations are being contemplated by state agencies.

"It’s no secret that Representative Warren Petersen is one of the most conservative legislators at the Capitol. Regardless of the issue, or the pressure, he is one of the people you can count on to do the right thing. His leadership has been critical in promoting policy that ensures liberty and the future prosperity of Arizona. I look forward to working with him in the Senate." ~ House Majority Leader Steve Montenegro

"Representative Petersen has been one of the strongest conservatives at the Capitol. He is our regulatory hawk. You can count on him to keep the government in check. I look forward to working with him in the Senate." ~ Senate Whip Gail Griffin

He has earned top ratings from  the Arizona Citizens Defense League and the NRA.  He was a primary sponsor of SB1257, which would have allowed individuals with a Concealed Carry permit to carry in certain public places.

“Arizona ranks top ten for job growth and fifth best for regulatory climate. This doesn’t happen by accident. It takes committed leaders like Representative Petersen to get it done. He has consistently passed legislation that cuts red tape and gets government out of the way. It hasn’t made the big government crowd happy, but we need more strong conservatives like him at the legislature. It has been a pleasure to serve with him and I look forward to working with him in the Senate.”  ~ Senator Debbie Lesko

He voted NO to the infamous Medicaid expansion and was part of the lawsuit to try to stop it from being implemented.

Is Your Arizona Legislator a Hero of the Taxpayer or Friend of Big Government?