This November 4, we will find out what Gilbert residents are made of.  For you see, in the age of information, ignorance is a choice.

Guess who’s getting involved in making sure that Jill Humpherys gets re-elected, and that Democrat Charles Santa Cruz is elected to the board, and that conservatives Ron Bellus and Dawn Brimhall are nothing but a memory?

Did you get your mailer?  (See below.)  Notice who funded it?

Thanks to a couple of conservatives who did their homework, we know that the National Education Association (teachers’ union) contributed $500,000 to Revive Arizona Now.  The Democratic Legislative Committee:  $200,000.  Planned Parenthood:  $20,000.  (By the way, Planned Parenthood sent out a blast email asking you to thank Jill Humpherys for voting to retain information in a biology textbook that informs your child on how to abort her child.)  Click HERE to see the Campaign Finance Report.

Also, Every Voice donated $20,000 to Revive AZ Now. Donors to Every Voice include the Tides Foundation, NEA, Sierra Club, and UFCW. Click HERE.

The Left will do anything to hang on to their domination of K-12, including throwing money at a local school board race.  They aren’t afraid of all conservatives, just the effective ones. 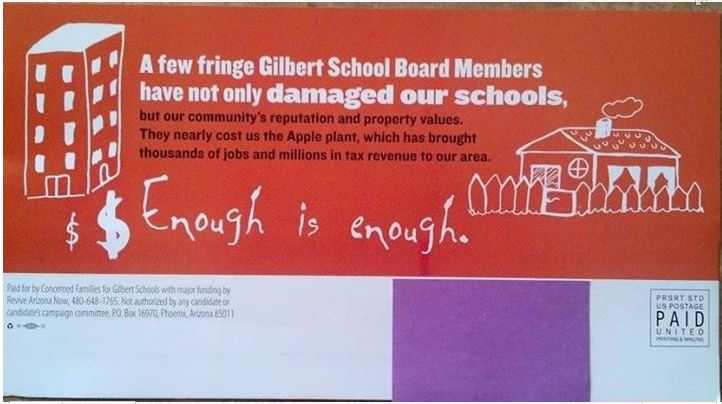 Stand for Something or Fall for Anything:  Why the Gilbert School Board race is Critical

Gilbert School Board Meeting Tonight:  Invocation Returns After 14 Yeards of Being Silenced

Gilbert School Board:  Thanks for Standing up for Transparency and Accountability

Gilbert’s Conservative School Board:  WAR is the Price of Neglect

The Accomplishments of the Gilbert Schools Governing Board

Gilbert Schools Governing Board Sets a Standard of Excellence