What is it about the Left that deception is their stock and trade?  Have you seen this sign around Gilbert?  Who do you think posted it?  Those who OPPOSE the override?  Or those who WANT the override?  Well, if you’ve done your homework, and apparently many otherwise borderline intelligent people have not, then you would know that it was posted by the YES bunch.  Here is the DECEPTIVE sign.  Did you fall for it? 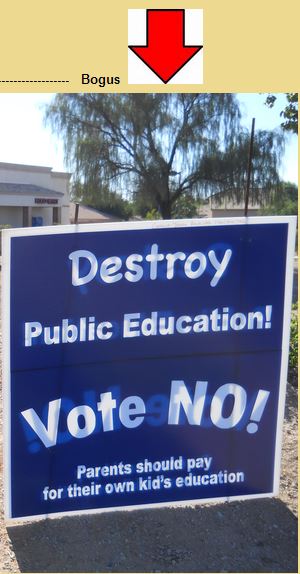 Here is the letter that I sent to the East Valley Tribune in respose to the "outrage" expressed by Mr. Chiazza, whose earlier letter ASSumed this was posted by those of us who oppose the Gilbert Property Tax Override.

In response to Mr. Chiazza’s recent letter to the editor, I too find it quite disturbing that radicals are putting up signs saying “Destroy Public Education.” However, the group that placed these signs are not those who oppose the override. They were placed by people who want the property tax override to pass.  They hoped that their deception would cause voters to jump to an inaccurate conclusion, just as Mr. Chiazza did.

If you look closely at those deceptive signs that look strikingly similar to the honest signs, you will see there is no website identified.  Neither will you see any indication of the group that paid for them.  Rather than being transparent and identifying the responsible party, the opposition prefers to deceive.  If you look very closely you will see a hand-written name and phone number on the back.  The phone number is a VOIP phone number (internet connection phone).  Several people have called the number and left messages.  Nobody has called back.

Those who oppose the override want transparency and accountability.  They want to improve public education, not destroy it.  Those who want more of the taxpayers’ money have shown they are willing to use whatever shameful tactics it takes to achieve their end, even if it means deceiving and insulting Gilbert voters.

Support Strong Schools: Get the Facts.

Just Say No to District Overrides

CAUTION: The Public Schools are Back AGAIN asking for a Budget Increase.

We Live within our Means.  So can Gilbert Schools

Gilbert Schools Receives Money from Multiple Sources, but they Want More.  Vote NO to the Override.

There is No Correlation between Spending and Performance